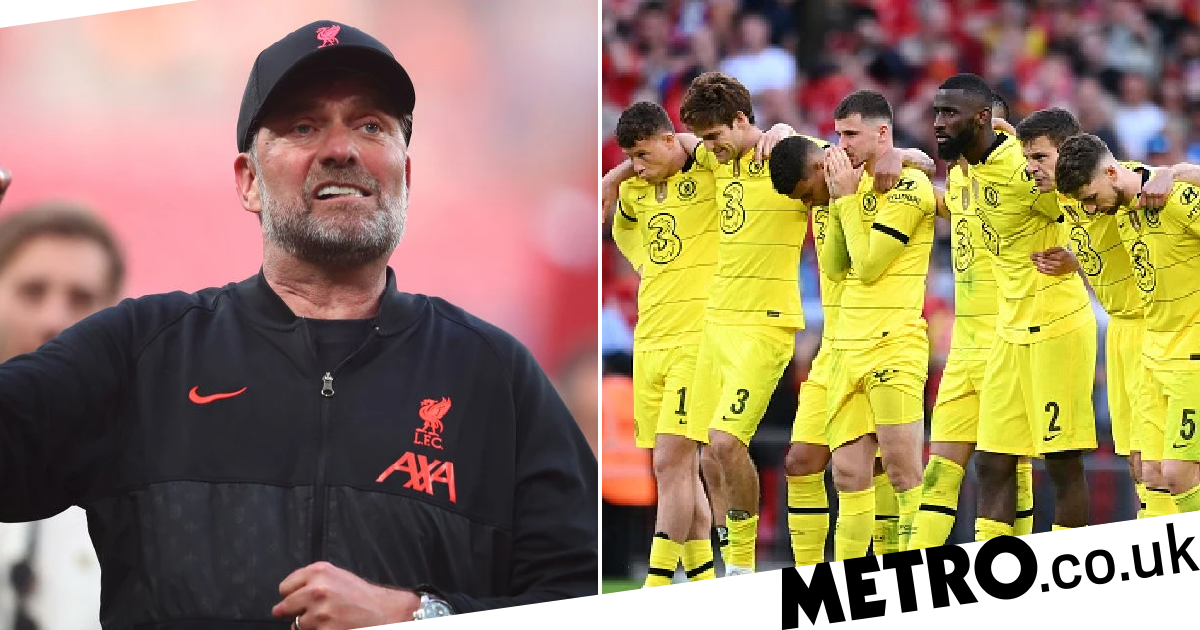 ‘It’s heartbreaking to be honest for Chelsea,’ Klopp said. ‘In a shootout there must be a loser and they are unlucky again.’

While it was a painful afternoon for the Blues, Liverpool’s hopes of securing a historic quadruple are still very much alive after they repeated their EFL Cup final victory in February.

Chelsea goalkeeper Kepa Arrizabalaga missed from the spot earlier in the season and it was Cesar Azpilicueta and Mason Mount this time, with Kostas Tsimikas scoring the decisive penalty in the 6-5 win.

Both teams had chances to win the game in normal time – Marcos Alonso hit the crossbar while Luis Diaz and Andrew Robertson both stuck the post.

But the 141st FA Cup final went to penalties and Liverpool emerged triumphant as they moved a step closer to securing the quadruple.

FA Cup and EFL Cup holders Liverpool are still in the Premier League title race and will face Real Madrid in the Champions League final at the end of the month.

Klopp added: It was an incredible, intense game against Chelsea – they would have deserved it [the win] exactly the same way, like in the Carabao Cup – that’s how small the margins are.

‘I couldn’t be more proud of my boys, the shift they put in, how hard they fought, early changes.

‘All of these things, missing good chances, overcoming good moments from Chelsea, then having really good moments ourselves.

‘Then in the penalty shootout, it was nerve-racking, my nails are gone but I really feel for Chelsea – for the second time, 120 minutes and you get nothing, that’s too hard. But for us I’m pretty happy.

Liverpool goalkeeper Alisson, meanwhile, said: ‘It’s amazing, we did such a good performance. It was a shame we didn’t score.

‘It was a proper fight, we kept a clean sheet, and then afterwards the boys were unbelievable scoring the goals. I just had to save the last one.

‘I am so happy. Myself and also Mendy did amazing saves. I couldn’t have done the saves without the help of the team. They work well and make it easier for me.’

Asked about his penalty save to deny Mount, the Brazilian added: ‘It was good hey? All goalkeeper coaches they help me with the decisions.

‘This gives us more confidence in the Premier League and also the Champions League final. It’s a fantastic moment now, we just need to enjoy.’