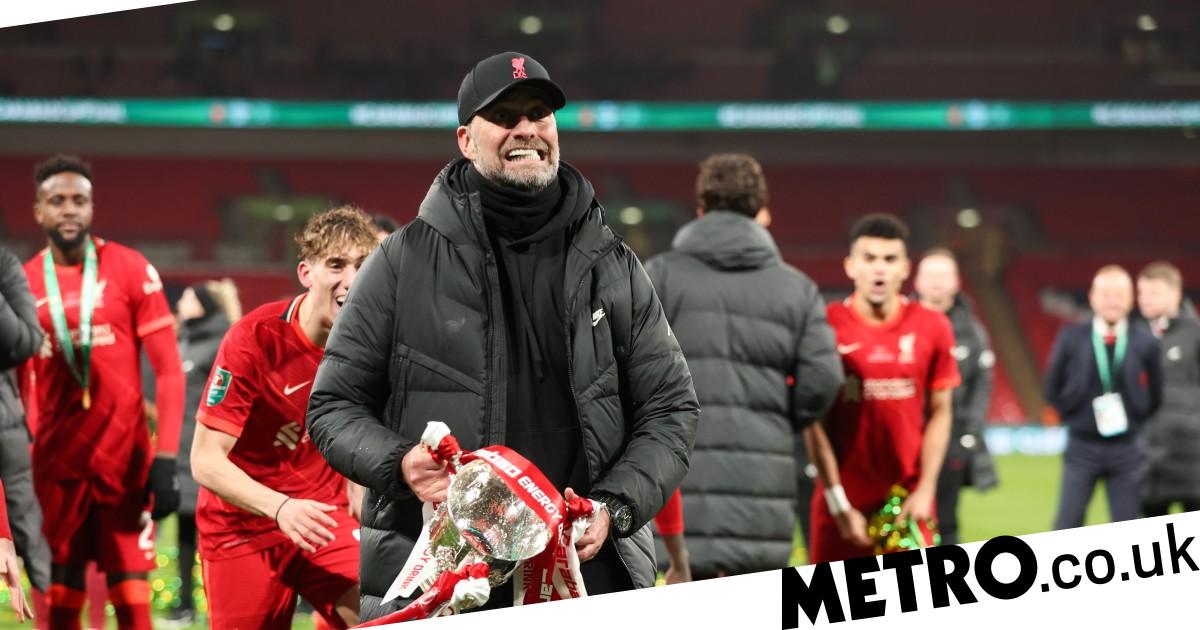 Liverpool manager Jurgen Klopp has played down his side’s chances of winning an unprecedented quadruple of trophies despite reaching the FA Cup final.

The Reds defeated Manchester City 3-2 on Saturday to reach their first final in 10 years and keep them in contention to win the four major pieces of silverware available to them this season.

An Ibrahima Konate goal and a Sadio Mane brace in the first-half put Liverpool in complete control at Wembley, and while the Citizens fought back after the break with goals from Jack Grealish and Bernardo Silva, it wasn’t enough to prevent Klopp from reaching his first FA Cup final.

Speaking to BBC One after the game, the German said: ‘Absolutely proud, incredible – I think the first half was one of the best we ever played. We did all the right stuff, we scored in the right moments, we played an incredible game in the first half, I really loved each second of it.

‘The second half started with the goal for Man City and then it opens up – the quality of City is insane, and you could see it was a much more open game.

‘We respect the quality of City so much and it’s so difficult to win against them. But because we have these boys in our dressing room, we have a chance.’

By reaching the final, Liverpool have put themselves in an incredibly unique position to claim all four major trophies in one season.

They have already won the Carabao Cup, defeating Chelsea on penalties back in February, and they may face the Blues at Wembley again in May if Chelsea defeat Crystal Palace in the other FA Cup semi-final on Sunday.

In the Premier League, Liverpool are currently just one point behind City with seven games to go, but their run-in is significantly more treacherous with home fixtures against Manchester United, Everton and Tottenham Hotspur still to go.

And finally in the Champions League, the Reds will face Villareal in the semi-finals and if they prevail over the two legs, they will face either City or Real Madrid in the final at the Stade de France.

But, as expected, Klopp has remained cautious on the possibility of winning all four trophies, adding: ‘The quadruple talk I can’t believe it. This win means we have another game and then we have to play Aston Villa in a midweek, they have to move one game again.

‘I don’t think we have a full free week before the last matchday – it’s all difficult but who cares? We came here and we wanted to go through to the final.

‘We knew about the problems but qualifying for this final makes the quadruple even more difficult – it’s the only way to do it but it makes it more difficult as well so it’s a strange situation.

‘But we are over the moon, we beat the strongest football team in the world and that’s a pretty special moment.’

If Liverpool do succeed it will be a historic moment as no English team has ever won the quadruple, the closest cases being Manchester United in 1999 who claimed the continent treble but missed out on the League Cup, and Manchester City in 2019 who won all the domestic trophies but failed to claim the Champions League.