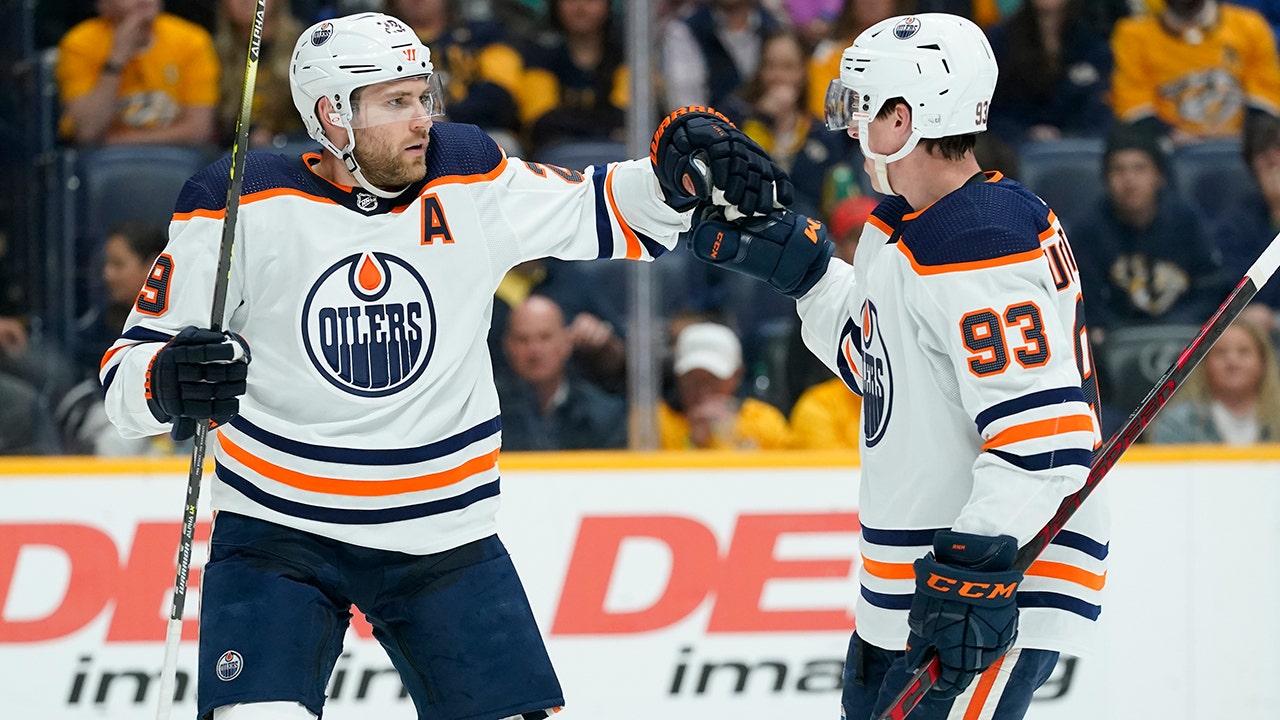 Leon Draisaitl had three goals and Mike Smith made 30 saves, leading the Edmonton Oilers to a 4-0 win over the Nashville Predators on Thursday night.

Darnell Nurse also scored and Connor McDavid and Ryan Nugent-Hopkins each had two assists for Edmonton, which snapped a two-game losing streak. The Oilers swept the three-game season series with Nashville and have beaten the Predators six straight games.

“We knew that in order for us to walk away with two points, we needed everybody firing on all cylinders,” Edmonton coach Jay Woodcroft said. “We came at that team in waves tonight, we skated well and we asserted what we wanted to do on them.”

Edmonton Oilers’ Leon Draisaitl (29) is congratulated by Ryan Nugent-Hopkins (93) after Draisaitl scored a goal against the Nashville Predators in the first period of an NHL hockey game Thursday, April 14, 2022, in Nashville, Tenn.
(AP Photo/Mark Humphrey)

The shutout was Smith’s first of the season and the 43rd of his career. His finest save came 24 seconds into the third period when he made a glove save of Matt Duchene’s shot from close range on the right side.

“He made a good move on me and I kind of bit on it then just instincts kick in and you try and get something on it and it ended up in my glove,” Smith said. “Obviously, it’s an important time of the game to make a save like that.”

Juuse Saros made 28 saves for Nashville, which has lost three of four. The Predators entered Thursday in the Western Conference’s top wild-card spot by one point.

Draisaitl opened the scoring at 8:56 of the first period.

With Edmonton on a power play, McDavid sent a pass from the left circle to Nugent-Hopkins in the slot. He made a quick touch pass to Draisaitl in the right circle, and he beat Saros with a one-timer.

Draisaitl struck again at 12:36 of the second.

Zach Hyman drove down the right side and, from below the goal line, sent a pass to Draisaitl in the slot. He beat Saros with a wrist shot through traffic on the stick side.

“Full 60 minutes, every facet of the game was checked off really,” Draisaitl said.

Nurse scored a short-handed goal at 15:29 to make it 3-0, connecting from the slot off of a feed from Evander Kane.

Draisaitl capped off his second hat trick of the season and the sixth of his career at 11:09 of the third, again on the power play. It was his 23rd power-play goal of the season.

Colton Sissons appeared to break Smith’s shutout bid early in the third, but Edmonton challenged the call of a goal on the ice and video review determined that the play was offside.

“Every loss hurts real bad this time of year,” Sissons said. “Hopefully we can learn a few lessons from it and keep moving forward.”

Draisaitl has had plenty of success in his career when facing the Predators With three goals Thursday night, Draisaitl has 19 goals and six assists in 20 games against Nashville.

Two of his career hat tricks have come at Nashville. His previous one was March 2, 2020, when he scored four times.

“I think sometimes you just have a team that it seems to work a little better against than others,” he said. “A couple of great plays tonight by some guys, and fortunately I took advantage of them.”

He had five goals and one assist in the three games against Nashville this season.

Earlier Thursday, the Predators recalled center Cody Glass from Milwaukee of the AHL. Glass, obtained in the offseason as part of the trade that sent Ryan Ellis to Philadelphia, began the season in Nashville before being sent to the minors for a majority of the season.