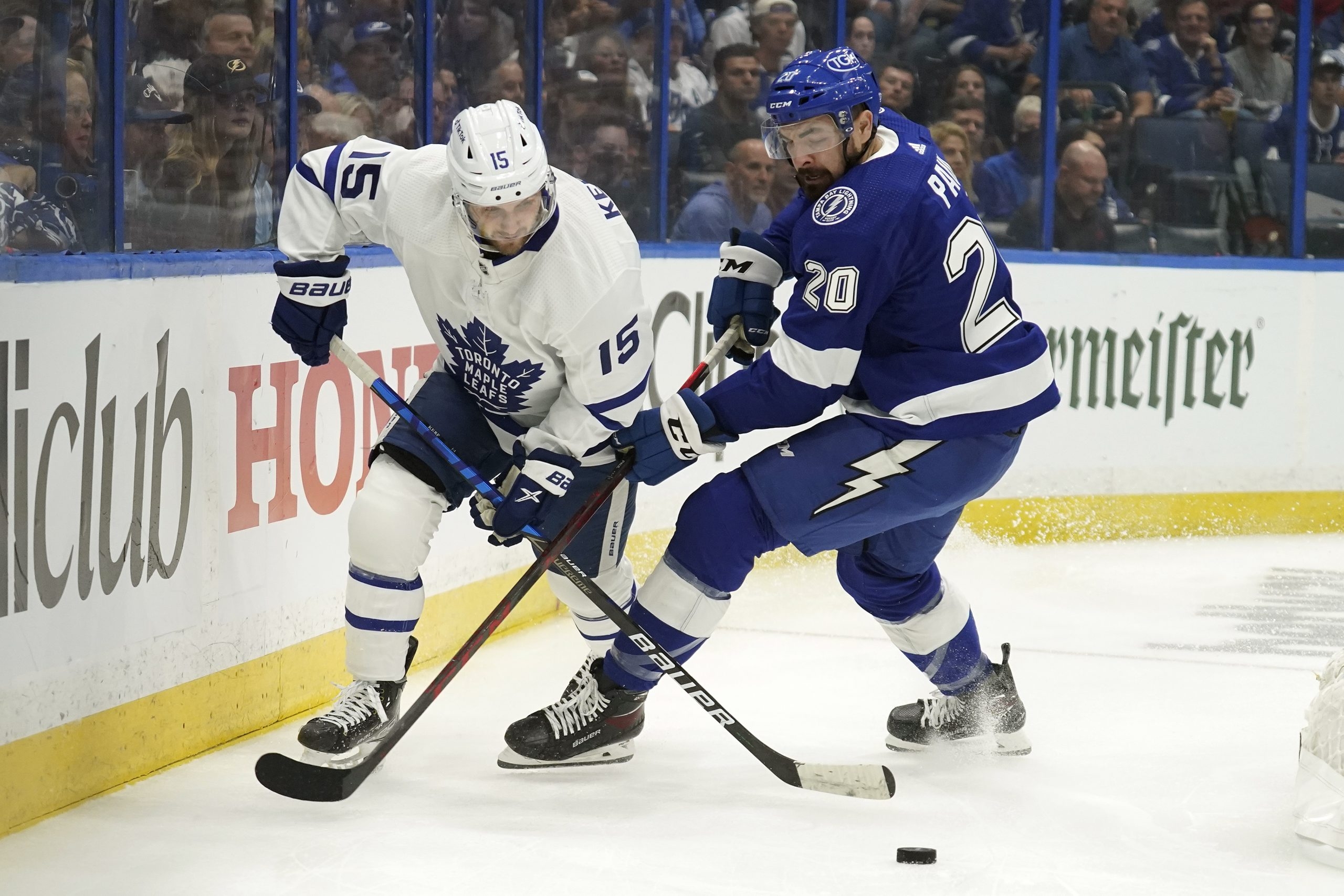 TAMPA — He was born in B.C., not Bern, but Alex Kerfoot doesn’t mind being designated as the Swiss army knife of the Maple Leafs.

Hockey talk for a forward who plays many positions, Kerfoot came via a trade with the Avalanche in 2019, very much unknown where the departing Nazem Kadri and his exploits were hard to ignore.

Kerfoot has since been everywhere around the starting 12, up with the stars, down with the pluggers and everywhere in between as a centre and winger. Late in Game 3 of this series against the Lightning, coach Sheldon Keefe used Kerfoot to replace Michael Bunting on first line left wing with Auston Matthews and Mitch Marner, a plum assignment.

That helped seal a 5-2 win and, on Sunday, the forecast was for Kerfoot getting another night of high-profile work.

“There’s lots of line-juggling on our team, so I’m comfortable with that,” Kerfoot said. “If you’re used to being in one role the majority of your career, then there is adjustment to a higher level, there is a mindset change.

”You’re never the best player on your team as you move around (keeping him humble). We have a lot of guys open to different roles. That’s what makes our team successful.”

Bunting, who was to start with fourth-liners Jason Spezza and Colin Blackwell on Sunday, insisted he was fine if he had to give way for Kerfoot, understanding that he missed time in April and Game 1 with a leg injury and that the team is looking for new ways to frustrate the Lightning.
“We were talking and I think he’s only not played one position for us, fourth line right wing or something like that,” Bunting laughed. “He’s reliable.”

Kerfoot also gives Matthews and Marner a different look to help combat the checking of Ondrej Palat, Alex Killorn and Brayden Point, which the Bolts utilize in home ice matchups.

“They play hard, they don’t take shifts off and they smother you defensively,” Kerfoot said of that opposing line. “They’ve got you with good sticks and don’t make a lot of mistakes.”

THE MOST WONDERFUL TIME

Bunting came from the training room right into the fire of his first NHL playoff action in Games 2 and 3. Tampa was gnarly in Toronto and beat the Leafs to even the series, while in Game 3, Toronto responded, minus Wayne Simmonds and Kyle Clifford as bodyguards, meaning the smaller Bunting had to be at his agitating best.

“It’s fast hockey, it’s rough, it’s right up my alley so I’ve been enjoying it,” Bunting said. “It’s fun to play at home and fun on the road, to be the bad guy in the rink. You have to find energy in playoffs any way you can.”

Kerfoot, who has now played 34 playoff games with his 18 in Colorado, is also having a blast.

“Everything about our league is cool at this time of year,” Kerfoot said. “You want to play in these environments, at home, come down here and play in front of a hostile crowd. When we’re not playing, every night we’re going home, hanging out watching games. Everything gets amplified.”

Playoffs can make strange bedfellows and Lightning defenceman Zach Bogosian is in this series against the team he was on last year that lost to Montreal.

Bogosian didn’t re-sign in Toronto and returned to Tampa, where he was on their 2020 Cup team.

“First time I’ve done it (faced a former team in the playoffs),” he said. “It’s not been awkward or weird. I’m close to a lot of guys on the other side, but there has been zero communication. It’s playoff hockey. It’s business”

Tampa coach Jon Cooper urged most of his players to avoid the rink on Sunday morning, especially those with Mother’s Day duties.

Bogosian’s mother, Vicky, was in town and Zach helped wife Bianca get their three kids ready for a swimming trip before coming to work.

“For what my mom has done for me and what my wife has done for our kids, it’s a special day,” Bogosian said. “But they also understand there’s a game tonight. It was hugs and kisses this morning, now it’s game time.”

Keefe said he hoped his players called home to their moms. Bunting used his morning TV interview platform for a shout-out to Lynda back in Scarborough.

“She’s been my rock since Day 1, supporting me getting to the NHL and sacrificing a lot to put my sports first. I can’t thank her enough.

In Game 3, there were 13 Leafs who blocked at least one shot, Marner getting in front of four.

That wasn’t the case most of the regular season, Toronto having great possession numbers that limited the need for much puck pain.

Now, they’re all up for getting down to help Jack Campbell.

“That’s the time of year, it’s really big,” Keefe said. “It’s one of the areas we talk to our guys about.

“The expectation was that we’d have an added awareness and diligence, that physicality is going to rise and so will the urgency to keep pucks away from our net.

“(The Bolts) do a pretty good job doing that and creating traffic and tips. So, that was going to be a real challenge coming in and we’ve done a real nice job.

“The volume (of blocks) is great. But there have been key blocks at times where they’ve broken us down, looked threatening, but we got a stick or a leg on it.

“It helps Jack and creates a little less chaos around our net.”