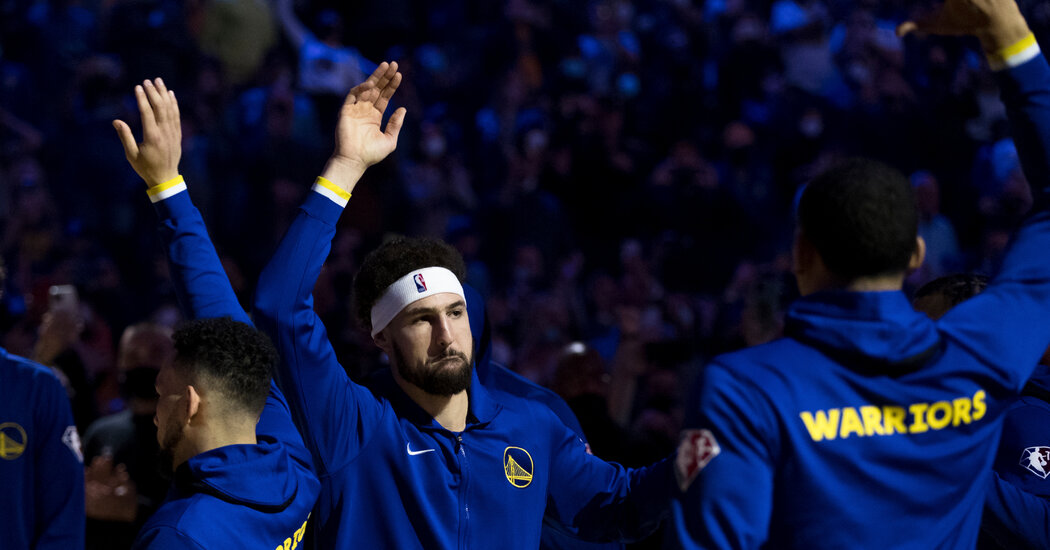 Klay Thompson of the Golden State Warriors has never been known as a leaper. He used to have a running competition with Zaza Pachulia, a former teammate, to see who could finish each season with the most dunks. As more of an earthbound athlete, Thompson knew his dunks were cause for celebration.

And that was before he missed the past two-plus seasons with a pair of serious injuries.

On Sunday, after 941 days away, Thompson was back in uniform. His hair was longer, and he had added a headband — part of a rebrand that had been born out of months of relative “solitude,” he said — but he was characteristically fearless in front of an adoring crowd at Chase Center in San Francisco.

That much was clear late in the second quarter, when he found himself being guarded on the perimeter by Jarrett Allen, a 6-foot-10 center for the Cleveland Cavaliers. Recognizing the mismatch, Thompson blew past Allen with a crossover dribble, accelerated toward the hoop and then dunked over two other defenders.

“It felt so good to throw that down,” Thompson said. “I did not expect that.”

About an hour after Golden State’s 96-82 win, Thompson was seated on a dais at his news conference as he glanced at a box score. He checked his numbers: 17 points in 20 minutes, 7-of-18 shooting from the field, 3 of 8 from the 3-point line. But his production was not important.

Not after tearing the anterior cruciate ligament in his left knee in Game 6 of the 2019 N.B.A. finals, then rupturing his right Achilles’ tendon before the start of last season. Not after missing so many games, and enduring so many hours of physical therapy, and spending so much time away from the court.

There were moments, Thompson said, when he wondered whether he would ever find his way back. Would his surgically repaired limbs have the same pop? Would he regain his feel for the ball? Would his body hold up through the rigors of rehab?

On Sunday, joy was a box score and seeing his name again, proof that the game did not desert him.

“I’m proud of myself for persevering,” he said, adding: “It’s only up from here.”

Thompson has long been one of the league’s most popular players — respected by opponents, revered by teammates, beloved by fans. A three-time champion and five-time All-Star, he loves hoops, the ocean and his bulldog, Rocco. He reads the newspaper. He rides an electric bike. He considers himself a concerned citizen, going so far as to share his opinions about faulty scaffolding with local reporters.

Which is one of the reasons his absence was such a bummer. How long was Thompson gone? The N.B.A. wrapped up a pandemic-stricken season at Disney World. The Los Angeles Lakers and Milwaukee Bucks won championships. The Warriors moved into a new arena, then rebuilt their roster after plunging to the depths of the league standings.

Thompson, meantime, played chess and bought a 37-foot fishing boat. He signed a five-year contract extension worth about $190 million, determined to one day make good on Golden State’s investment. He made cameos with NBC Bay Area’s broadcast crew, offering game analysis and updates on his progress.

“Just a little bored at times,” he said during a game last season.

Mostly, though, he rehabbed. And rehabbed. And rehabbed some more, fighting the twin demons of self-doubt and impatience. In late November, after Golden State won another game without him, he draped a towel over his head as the arena emptied out, and remained on the bench by himself for about a half-hour. By then, the road back had been too long and too hard. His return was close, but not close enough.

“Nobody could possibly know what he went through,” Kerr said before Sunday’s game.

Yet Thompson’s familiar hunger was always there, lurking behind all those squats and sprints, and when he was omitted from the league’s 75th anniversary team this season, he expressed his dissatisfaction before donning a No. 77 jersey for subsequent workouts. (A total of 76 players were selected for the team.)

At a news conference in November, Thompson alluded to the challenges he had faced in recovering from his injuries, describing many of the obstacles as more mental than physical, though he stopped short of sharing specifics.

“I try not to revisit those times,” he said, adding: “I’m lucky I play in the era I do because technology and science have allowed athletes to come back better than ever.”

“Which is one of the best players in the world,” he said.

Golden State branded Sunday as #KlayDay. His teammates showed up to the arena wearing Thompson jerseys. Fans cheered for Thompson every time he took a shot — in pregame warm-ups. He savored being introduced as one of the team’s starters. He proceeded to cram five field-goal attempts into his first 4 minutes 23 seconds of playing time.

Thompson found his rhythm as the game wore on. He barked at officials. He launched 3-pointers. He played off the crowd. And he soared for that dunk, which had his teammates tumbling off the bench.

“When Klay had perfect knees and Achilles’, I don’t remember him dunking like that,” Kevon Looney said.

“It was vicious,” Stephen Curry said.

In the process, the Warriors improved to 30-9, having already reasserted themselves as contenders. Thompson might be back — a huge personal victory — but he said he still had big goals. Why not chase another title? He now knows what is possible.