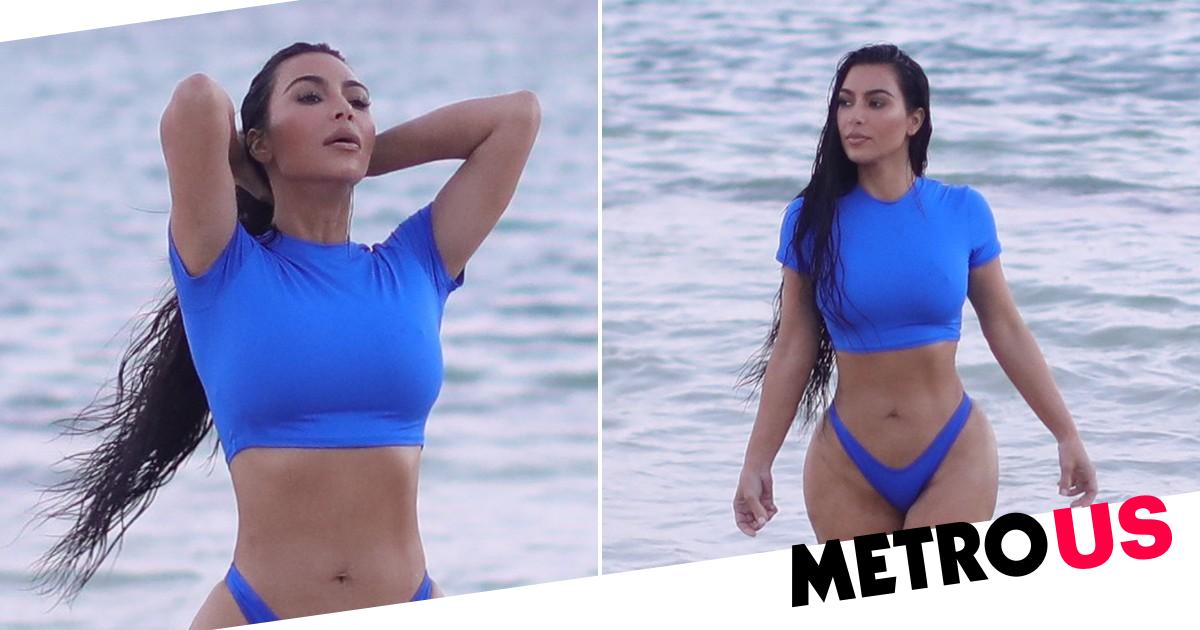 All eyes were on Kim Kardashian as she frolicked on a beach wearing a bright blue two-piece for a Skims swimwear shoot.

The businesswoman, 41 showcased sensational curves during the photoshoot for her Skims swimwear line on a tropical getaway.

She waded through the water with poise and strutted her stuff on the sand while wearing an electric blue crop top and matching high-waisted bottoms.

The KUWTK star’s long brunette locks were swept back off her face while her make-up was kept minimal.

For one shot, Kim ventured further out into the water while her photographer emerged himself to bag the shots.

Kim entered full-on model mode, stretching her arms above her head before playfully pouting and flashing peace signs when she exited the sea.

The mom-of-two was also spotted sitting on the back of a golf buggy after the shoot wrapped.

Kim has been teasing fans with her upcoming swimwear line by sharing bikini clad images of herself following her trip to the Bahamas this month.

While she’s yet to confirm a launch date for her Skims swimwear collection, she appeared to announce that she’s expanding her hugely successful brand back in August.

A fan tweeted to her, ‘SWIMBERLY’ to which Kim replied, ‘SOONCOME,’ suggesting there’s more in the works for her loungewear and lingerie label.

According to Page Six, when Kim filed her trademark for Skims in 2019, her application actually included swimwear, beach cover-ups and swim caps, implying she’s had dreams of venturing into swimwear for some time.

It isn’t just her booming business (reportedly worth $1.6billion) that’s got Kim smiling, as she recently enjoyed a romantic vacation with beau Pete Davidson.

The couple of the moment started 2022 in sunny climates as they took their blossoming romance international, jetting to the Bahamas.

Kim and the SNL comic have been romantically linked for several months, now but are yet to publicly confirm a relationship.

However, they seem to be spending more time together than ever, meanwhile, Kim is in the process of getting divorced from rapper Kanye West.


MORE : Pete Davidson compares himself to bargain DVD bin in theory about why women like him amid rumoured Kim Kardashian romance