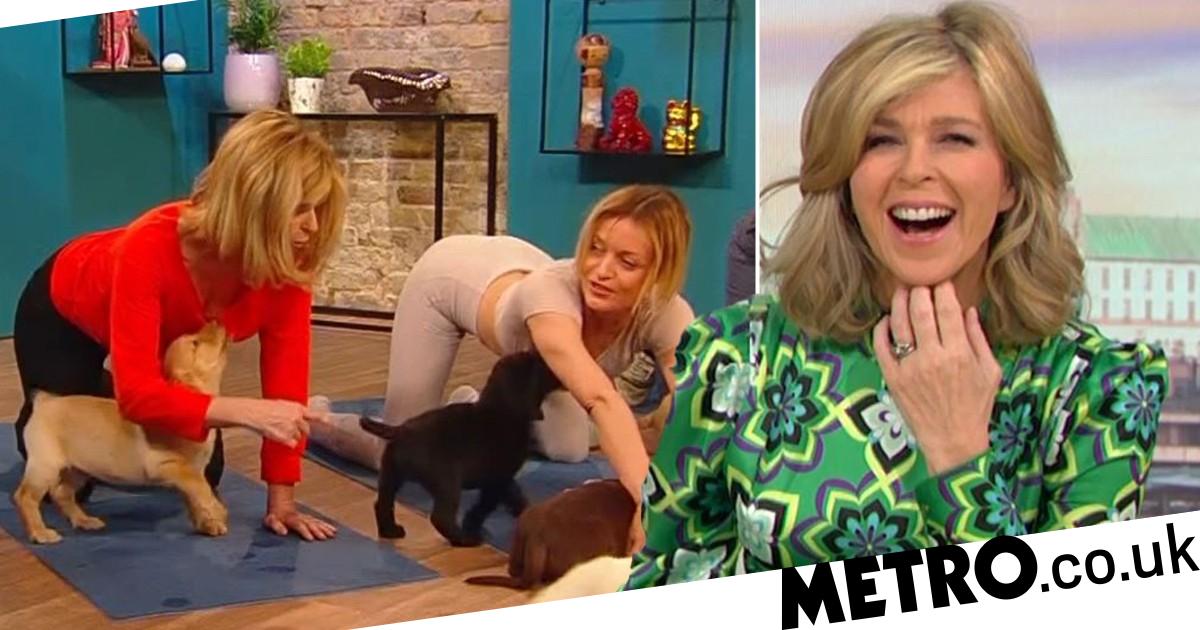 Kate Garraway took a moment to plug her new ITV show on Friday morning but she promoted the wrong start time.

The Good Morning Britain presenter is launching new programme Garraway’s Good Stuff on Saturday at 8.30am, but she accidentally told GMB viewers to tune in half an hour early.

Before being informed of her mistake, she repeatedly mentioned an 8am start time as a clip of her doing yoga with puppies was played to advertise the first episode.

She said: ‘It starts tomorrow, 8 o’clock… That is me doing yoga with some puppies! Watch at 8 o’clock really.

‘The whole idea is that on GMB I talk lots of serious and important stuff, of course, and a lot of it recently, the last couple of years, has been really grim.

‘So this is a chance to have a little bit of me time, 8 o’clock in the morning, and just talk about positive things, particularly things that are good for your health and your well-being, and with some good guests just to have lots of fun.

‘So do join me at 8 o’clock tomorrow for Garraway’s good stuff. That’s just a little bit – we’re not just playing with puppies!’

However, she quickly got a message in her ear from producers and revealed she’d made a mistake.

Kate admitted she was glad to find out she gets a bit more of a lie-in on Saturday mornings with the later start, and urged people to get themselves settled in time.

‘Garraway’s Good Stuff, I don’t have to get up as early! This is brilliant news! It’s ITV, at half past 8,’ she confirmed.

Good Morning Britain airs weekdays at 6am on ITV. Garraway’s Good Stuff starts tomorrow at 8.30am on ITV.


MORE : Good Morning Britain’s Kate Garraway forced to clarify she doesn’t want NHS to be privatised: ‘I didn’t at any point say that’


MORE : Kate Garraway heartbreakingly reveals husband Derek Draper’s Covid battle has ‘affected their relationship’ and left her with a ‘loss’