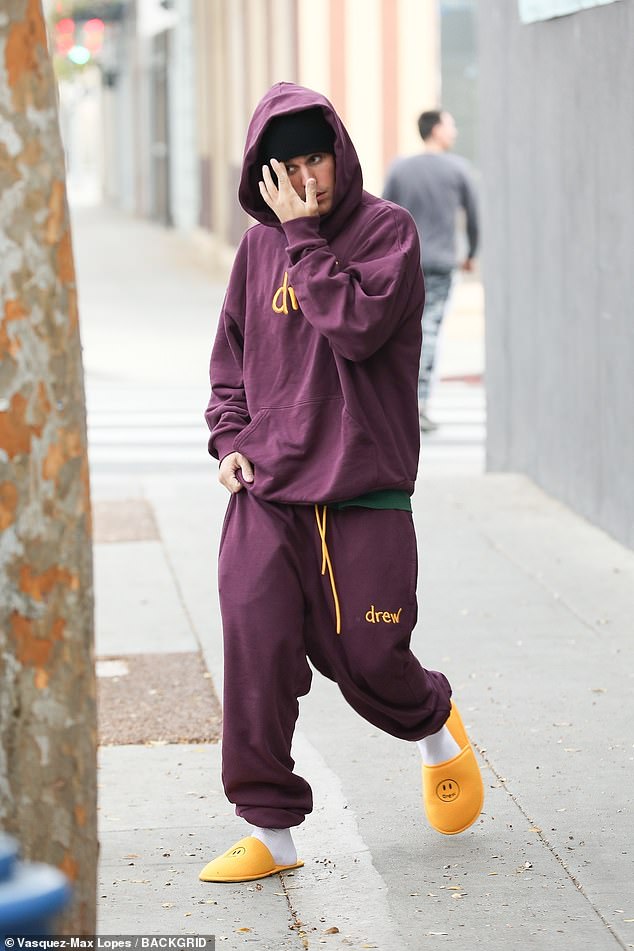 By Kevin Kayhart For Dailymail.com

Looking to get the attention of fans ahead of his Justice World Tour, Justin Bieber dove head first in the metaverse world and performed live as an avatar on Thursday.

With the rebroadcast of Justin Bieber: An Interactive Virtual Experience set to air on Sunday, the pop superstar took advantage of some free time and went on an errand run.

The Yummy star made his way around his adopted home town of Los Angeles, all while representing his fashion line, decked out in burgundy sweatpants and matching hoodie from Drew.

Scroll down to video

On the go: Justin Bieber, 27, took advantage of some free time and headed out on an errand run in Los Angeles on Saturday in Drew sweatpants and matching hoodie

The pop superstar also felt the need to round out his Drew ensemble by wearing a pair of Drew golden yellow slippers that were adorned with the company’s happy face logo on the top.

Seemingly hoping for a little anonymity to help speed up his course of action, Bieber wore a black beanie cap and pulled the the hood over his head.

The afternoon outing comes one day after Bieber and wife Hailey enjoyed a date night, which included dinner at the celebrity hotspot, Craig’s.

The two were spotted getting into their Tesla, with Justin taking the wheel, and then arriving at the restaurant and being escorted in through the back entrance.

All about the Drew: The pop superstar rounded out his Drew ensemble with a pair of slippers from his fashion label

The afternoon outing also came two days after his scheduled transformation and performance as an avatar for an entire live show in his own virtual universe.

The show is being rebroadcast two times on Sunday through Bieber’s YouTube channel.  All fans have to do is sign-up for free through Wave, the virtual entertainment company that he partnered with for the event.

By signing up for free through Wave, fans can interact with Bieber when he’s performing live.

Virtual Justin: Justin Bieber dove head first in the metaverse world and performed live as an avatar on Thursday

First-ever for Biebs: The pop superstar partnered with the virtual entertainment company, Wave, for the event that could be seen on Bieber’s YouTube channel

Free pass inside Bieber’s world: By signing up for free through Wave, fans can interact with Bieber when he’s performing live

Bieber’s upcoming Justice World Tour begins with a show in San Diego on February 18, 2022 and go through June, when he makes to trek to Europe for the next leg.

The Sorry hitmaker will play over 90 shows in more than 20 countries spread across five continents from May 2022 to March of the following year.

The Justice World Tour will mark the first time he has performed abroad since 2017.

His justice: Bieber used the event to sing songs from his latest studio album, Justice

Promo push: Justin Bieber: An Interactive Virtual Experience is part of the promotional push for Bieber’s upcoming Justice World Tour, which kicks off in late February in the U.S.

Ready for the road: Bieber announced more new dates for his Justice World Tour this past week