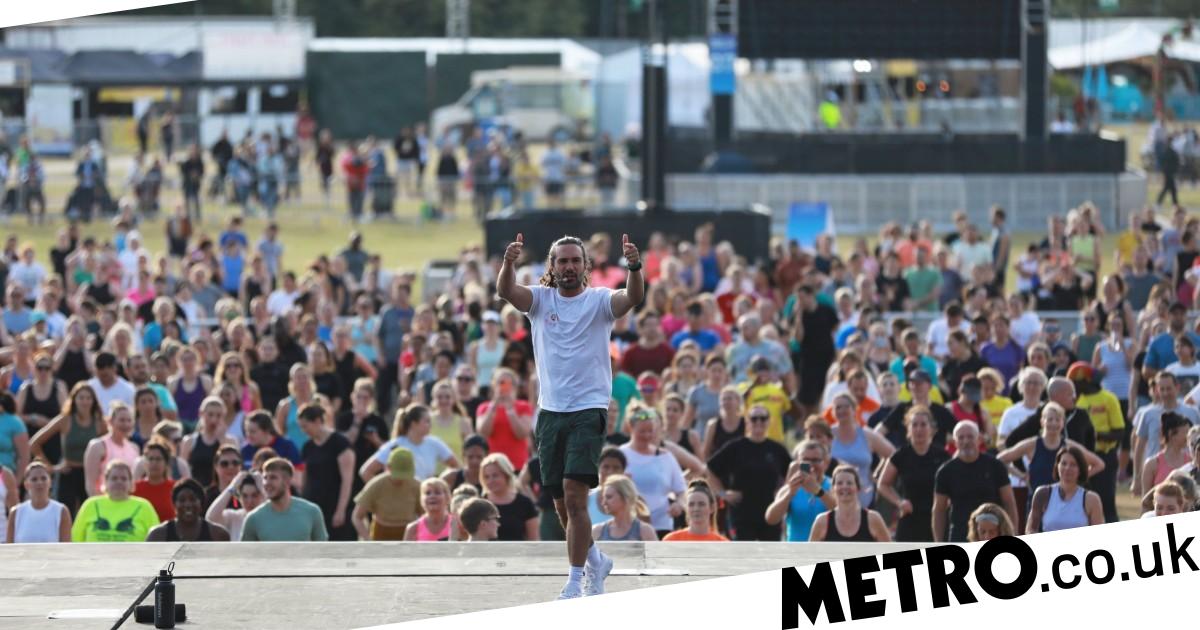 Not satisfied with keeping the nation fit during the pandemic when we couldn’t leave our homes, Joe Wicks is now trying to make history again.

The fitness icon, also known as the Body Coach, gathered thousands to Hyde Park on Wednesday as he set out his aim: to break a world record.

Joe hoped to host the biggest HIIT workout ever in London’s iconic park, which this weekend will host the Rolling Stones for BST.

This week, the dad-of-three burst onto the stage ready to lead the workout, dressed in a white t-shirt and khaki shorts, his trademark long hair tied back, as a thousands-strong crowd cheered him on.

Should they be successful, Joe and the participants will have broken the Guinness World Record for the most people to participate in a HIIT class at once.

(A record, notably, already held by Joe for the class he held in Hyde Park all the way back in 2017!)

The event, sponsored by Lululemon, saw Joe lead the massive crowd in star jumps, high knees and more in the specialised workout.

A HIIT workout consists of short bouts of intense work lasting anywhere from 10 to 60 seconds, followed immediately by a period of active recovery of the same length or longer.

It has not yet been confirmed whether Joe and the crowd broke the record for the most people participating in a HIIT workout, but it’s clear the fitness guru was in top form as he led the huge class.

Taking to Instagram before the event, Joe thanked people for travelling to London and added: ‘t’s going to be super fun, we’re going to have the music playing. It’s not raining and it’s nice and warm.

‘It’s going to be an amazing evening and event and I look forward to seeing you, we are going to try and break a new world record!’

The star later uploaded a video to Instagram showing him leading the crowd in the workout, keeping the energy high as he urged those taking part: ‘Arms up! Knees up!’

Joe’s latest endeavour to keep Britain fit while also having fun comes weeks after the instructor showed his serious side in a devastating BBC documentary.

The doc – Joe Wicks: Facing My Childhood – saw the Body Coach open up about his difficult childhood and confront his parents about their addictions as they struggled to raise Joe and his younger brother.

Joe previously said that he hopes opening up about his turbulent childhood due to his parents’ mental health issues will inspire others to have further conversations around the subject.

The documentary was produced by documentary-maker Louis Theroux, who previously revealed Joe’s exercise programme was one of the things that helped him cope during lockdown.

‘It’s got a lot of heavy content, but it’s done in a really lovely way, and at the end of it, it has a really positive, uplifting message,’ Joe recently told Metro.co.uk of the film.

‘My mum was more reluctant because she’s quite shy and she felt quite exposed, but after watching it she loved it.

‘It’s really uplifting and she’s really proud that we’ve been able to share this because it’s going to help so many families.’


MORE : Joe Wicks breaks down in tears as he recalls father’s drug addiction in powerful documentary: ‘I didn’t want to let you go’