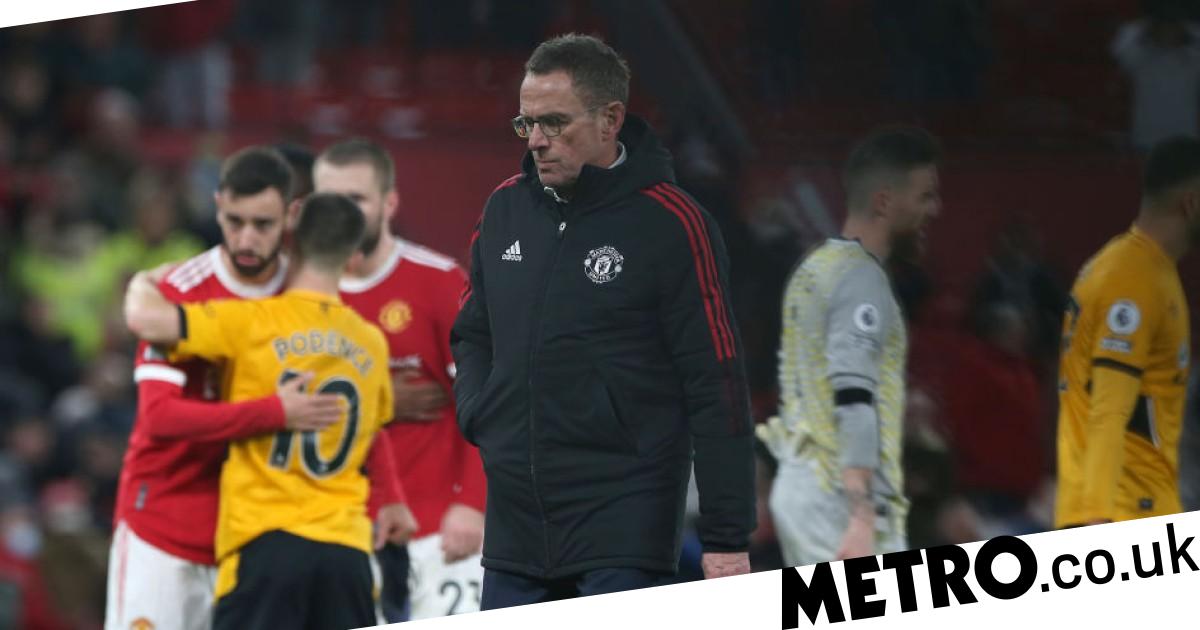 Ralf Rangnick was ‘making up systems’ and had ‘no real idea’ during Manchester United’s 1-0 defeat to Wolverhampton Wanderers on Monday night, believes Jamie Redknapp.

It was a tough evening out for the German who suffered his first Premier League defeat as Red Devils boss thanks to a late Joao Moutinho winner.

Rangnick started with the 4-2-2-2 he has been using in recent matches, then switched to match Wolves’ formation with three central defenders, while they seemed to be set up in a 4-4-2 at points as well.

Redknapp was not sure what Rangnick’s thinking was and implied that neither did the United manager, who he says has not introduced any identity into the team yet.

‘They [Wolves] were playing against a side that were so devoid of confidence, of ideas, of how to play the system,’ Redknapp told Sky Sports.

‘We speak about managers coming into the game and he came in with this famed 4-2-2-2 system and it doesn’t work. You have to have the right players, no matter what system you play.

‘He went to a three at the back, a 4-2-2, by the end I think he was making up systems. There was no real idea, no identity of how they were trying to play.’

An embarrassing defeat to Watford led to the dismissal of previous manager Ole Gunnar Solskjaer, but Redknapp reckons the 4-1 loss to the Hornets might not have been bad as this performance.

‘The Watford performance was a real low for Manchester United, but I’m sure the Man United fans at least thought, “we looked a bit exciting going forward.” There was nothing today,’ said the former England midfielder.

‘When you watch Man City play and all the best teams, they have control of the midfield, United never had any control of that midfield today. Never once did they play passes to each other.’

‘They never had an ability to take the sting out of the game, to get some comfort in it, they were so poor.’

Rangnick himself admitted that his side failed to impose themselves and struggled to compete with the tactics that Wolves used.

‘They’re playing with four or five central midfielders and we had problems to control that part of the pitch,’ Rangnick told Sky Sports. ‘We decided to change our formation and we had more control – they didn’t have as many chances – but we missed our chances and we have to admit they deserved to win.

‘Wolves were the best team we’ve played. We have more problems today than in other games.

‘We didn’t press at all. We tried but we were not able to get into those pressing situations. They had an overload in midfield and they played via their wing-backs. We’ve been only working two and a half or three weeks after needing to close the training centre. We had the results. In times we played well but today we have to admit they’re better than us.’