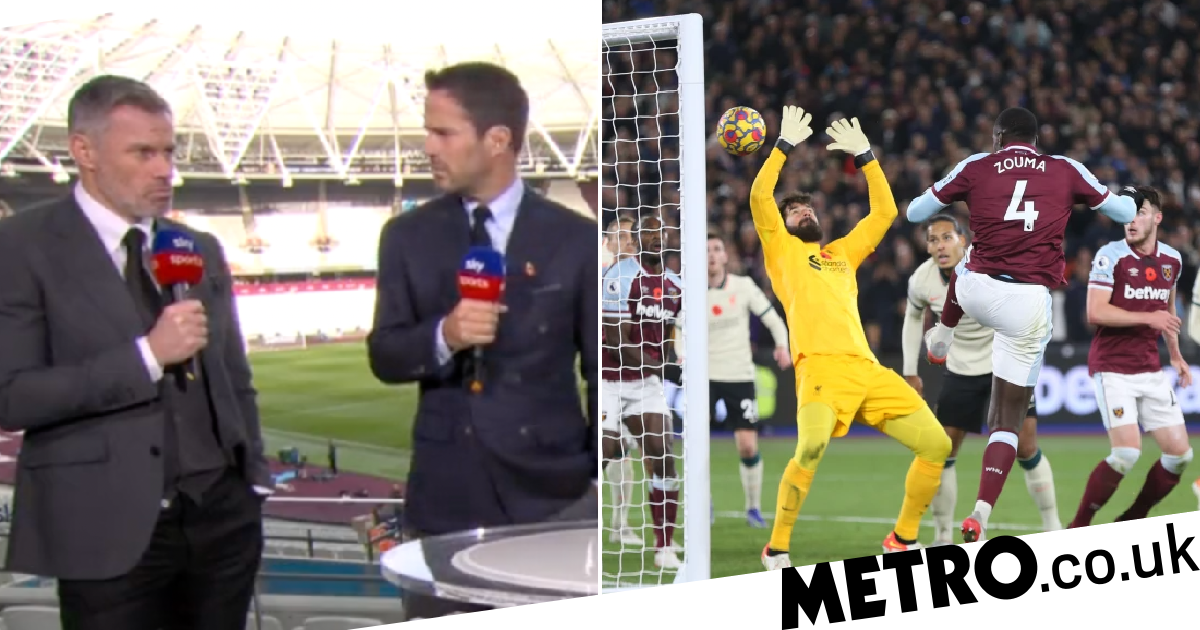 Jamie Carragher took aim at Alisson following Liverpool’s 3-2 defeat to West Ham and felt the goalkeeper was partly to blame for all three goals the team conceded.

Alisson’s evening got off to the worst possible start as he directed the ball into his own net from a Pablo Fornals corner in only the fourth minute at the London Stadium.

Trent Alexander-Arnold levelled with a stunning free-kick on the stroke of half-time, but Fornals and Kurt Zouma both netted in the space of seven minutes to restore the Hammers’ lead with 15 minutes remaining.

Divock Origi’s 83rd-minute strike proved to be a consolation for Jurgen Klopp’s Reds, with the result bringing an end to the visitors’ unbeaten start to the season in the Premier League.

Carragher was full of praise for David Moyes’ Irons – who moved up to third with the victory – but criticised Liverpool’s lacklustre defending and highlighted Alisson’s less-than-convincing performance between the sticks in the capital.

Watching back a replay of Fornals’ 67th-minute effort, the ex-Liverpool centre-back told Sky Sports: ‘Oh yeah, he’s got to save it. He should have done better on all three goals, no doubt about that.

‘But that’s something Liverpool have done for a while and me being in that position, I can’t quite get my head around it. And you look at their defensive record and it’s absolutely fantastic.

‘But I just think that when you’re in those positions I don’t know what you gain from holding the line.

‘Yes, [Joel] Matip’s gone towards the ball but even Virgil van Dijk sort of holds the line. The only two things that can happen there: you either catch them offside or they run through at goal and for me that’s not a fair fight.

‘In some ways I’m thinking, “You know what, I’d rather run back”. What do we gain out of an offside? Nothing, we’ve just got the ball 60 yards from the goal or they’re running through on our goalkeeper.

‘Liverpool do that an awful lot and I think when you’re playing against Liverpool it feels like the opposition will run through at the goalkeeper.’

Jamie Redknapp, like Carragher, was critical of Matip’s defending in the build-up to Fornals’ goal and claimed Alisson had a ‘really poor’ day in east London.

‘I don’t know what Joel Matip is doing here, why he gets attracted to the ball and then just doesn’t run back to his own goal,’ Redknapp said.

‘You can see Fornals, he’s running behind and Matip gets attracted to the ball. Just drop back, sprint back! But instead he tries to run to the ball.

‘It’s a big mistake and the goalkeeper has got to do better as well. Alisson had a really poor day.’

On Zouma’s header in the 74th minute, Redknapp added: ‘What a signing he’s been! He’s had knee problems, but he’s been brilliant this season.

‘He gets around the back post, I think the goalkeeper should do better.

‘You can see Trent Alexander-Arnold at the back post? Has he got to engage more? At least go body to body on him… he doesn’t.

‘It’s a brilliant header and you see every time the ball comes in the box from West Ham that there’s a fear because they’ve got good movement.

‘It expresses how good the manager is. Because West Ham are a big side you think they should be good at set-pieces, but it’s nothing to do with that. They work on it, they’ve got great runners and they’ve got an amazing delivery whether it’s Jarrod Bowen, whether it’s Aaron Cresswell or Fornals.

‘They are so difficult to defend against and that takes hours of practice. It’s not fun, but they’re the details that make the difference.’