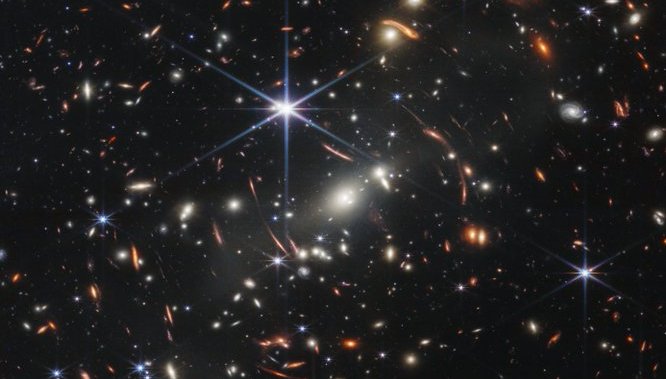 It’s a day that’s been highly anticipated in astronomy circles and beyond. On Monday, humans received the deepest view of the cosmos ever captured, thanks to the extraordinary capabilities of the James Webb Space Telescope (JWST).

The first image from the $10-billion telescope shows the farthest humanity has ever seen in both time and distance, closer to the dawn of the universe and the edge of the cosmos.

“If you held a grain of sand on the tip of your finger at arm’s length, that is the part of the universe that you’re seeing,” NASA administrator Bill Nelson said.

“What you’re seeing are galaxies, galaxies shining around other galaxies, and just a small little portion of the universe.”

If you held a grain of sand up to the sky at arm’s length, that tiny speck is the size of Webb’s view in this image. Imagine — galaxies galore within a grain, including light from galaxies that traveled billions of years to us!

Biden revealed a “deep field” image, filled with lots of stars — “lots” being an understatement — and massive galaxies in the foreground distorting the light of the objects behind, telescoping them and making faint and extremely distant galaxies visible. Parts of the image consist of light from not too long after the Big Bang.

👀 Sneak a peek at the deepest & sharpest infrared image of the early universe ever taken — all in a day’s work for the Webb telescope. (Literally, capturing it took less than a day!) This is Webb’s first image released as we begin to #UnfoldTheUniverse: https://t.co/tlougFWg8B pic.twitter.com/Y7ebmQwT7j

The images to be released Tuesday include a view of a giant gaseous planet outside our solar system, two images of a nebula where stars are born and die in spectacular beauty and an update of a classic image of five tightly clustered galaxies that dance around each other.

The JWST is the successor to the Hubble Space Telescope, which has not only provided stunning images, but has also been vital in providing scientific knowledge about our universe and its origins.

The JWST has a much larger primary mirror than Hubble (2.7 times larger in diameter, or about six times larger in area), giving it more light-gathering power and greatly improved sensitivity over the Hubble.

The JWST launched, and there were no second chances — its extremely distant location in the solar system makes it impossible for human crews to work on.

But the telescope’s massive sunshield, with its 107 restraints holding it in place, was released correctly and everything has gone according to plan.

Over the course of the past few months, we’ve been treated to small glimpses of the JWST’s optical brilliance.

In May, the telescope beamed back a round of test pictures showing off stunning images of a neighbouring satellite galaxy called the Large Magellanic Cloud. When compared with previous images captured by the Spitzer Space Telescope, the results are astonishing.

“It’s not until you actually see the kind of image that it delivers that you really internalize and go ‘wow!’” University of Arizona’s Marcia Rieke, chief scientist for Webb’s near-infrared camera, said at the time. “Just think of what we’re going to learn.”

And in March, the telescope handed in a spectacular star photo to NASA, passing its first assignment with flying colours.

“We said last fall that we would know that the telescope is working properly when we have an image of a star that looks like a star,” Lee Feinberg, Webb optical telescope element manager at NASA’s Goddard Space Flight Center, told Cosmos magazine at the time.

“The performance is as good if not better than our most optimistic prediction.”

Scientists believe the telescope will be able to peer back in time, possibly to 100 million years after the Big Bang. And not only do scientists think they can look back into galaxies from that time, but they also think they might be able to determine the composition of those galaxies.

Thomas Zurbuchen, NASA’s science mission chief, said that with the new telescope, the cosmos is “giving up secrets that had been there for many, many decades, centuries, millennia.”

“It’s not an image. It’s a new world view that you’re going to see,” he said during a recent media briefing.

Zurbuchen said when he saw the images he got emotional and so did his colleagues.

“It’s really hard to not look at the universe in new light and not just have a moment that is deeply personal.”

NASA is collaborating on Webb with the European and Canadian space agencies.