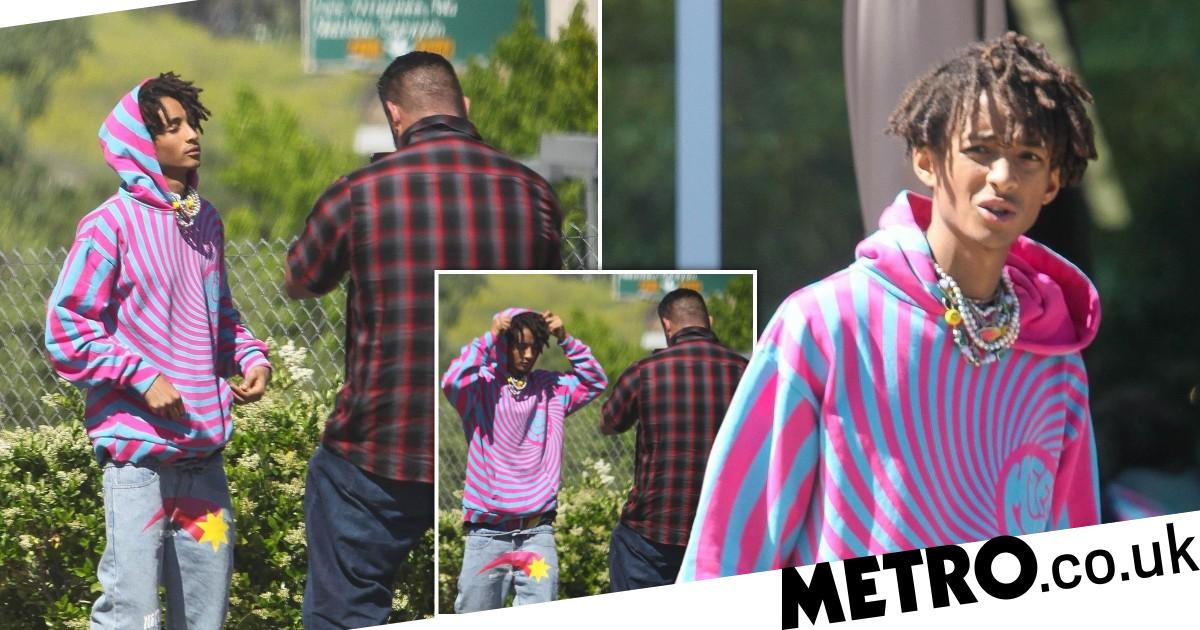 With seemingly not a care in the world, Jaden Smith was spotted grocery shopping and doing an impromptu photo shoot after his now infamous defending of his father Will Smith.

The 23-year-old, who has kept a fairly low profile since actor Will slapped Chris Rock at last month’s Oscars, was spotted food shopping at Erewhon Market in Calabasas, California, before getting his bodyguard to help him with a photo shoot in the parking lot.

He seemed totally chilled out as he snapped photos – despite the drama surrounding his father, who has now been banned from the Oscars for 10 years.

Jaden, who was showing off his MSFT clothing brand, defended his actor father almost immediately after the Academy Awards incident.

Taking to Twitter after the King Richard actor stormed the stage, and hit and swore at Chris at the 94th Academy Awards, Jaden wrote: ‘And that’s how we do it!’

The young rapper and actor saw his post retweeted and liked by thousands of followers.

One person replied: ‘You do what you do for your family. If someone were dissing my partner in front of the whole world I would have done the exact same thing.’

However, another disagreed and quipped: ‘No it’s not how you do it!’

While a third said: ‘Just a reminder your dad initially laughed at the joke…’

Chris, 57, had been presenting the award for best documentary when he made a joke about Will’s wife Jada Pinkett Smith’s shaved head, comparing her to GI Jane.

Actress Jada, who shares Jaden and daughter Willow with Will, has been outspoken about suffering with alopecia.

Following the joke, Will stormed the stage and slapped the comedian across the face.

The actor returned to his seat where he proceeded to angrily swear at Chris.

Shortly after the attack, Will took to the stage again – this time to accept the award for best actor for his role as Richard Williams – the father of tennis stars Serena and Venus Williams.

In the tearful speech, the 53-year-old made reference to the earlier drama by speaking about Richard’s notoriously protective nature towards his family and daughters.

‘Art imitates life,’ he said. ‘I look like the crazy father. Just like they said about Richard Williams. But love will make you do crazy things.’

He then joked that he hoped the Academy would invite him back after the altercation.

Following intense backlash, Will resigned from the Academy on April 1, five days after the incident.

In his resignation letter, he said: ‘I have directly responded to the Academy’s disciplinary hearing notice, and I will fully accept any and all consequences for my conduct.

‘My actions at the 94th Academy Awards presentation were shocking, painful, and inexcusable.’

He continued: ‘I betrayed the trust of the Academy.

‘I deprived other nominees and winners of their opportunity to celebrate and be celebrated for their extraordinary work. I am heartbroken.’

He also has been issued a 10-year ban by the Academy from the Oscars.

The hearing had been fast-tracked – while it was initially scheduled for April 18, it was moved forward by 10 days following his resignation from the Academy.

In a statement earlier this month, he commented: ‘I accept and respect the Academy’s decision.’


MORE : Lorraine viewers disgusted over English fry up served in an Easter egg in bizarre ‘hack’