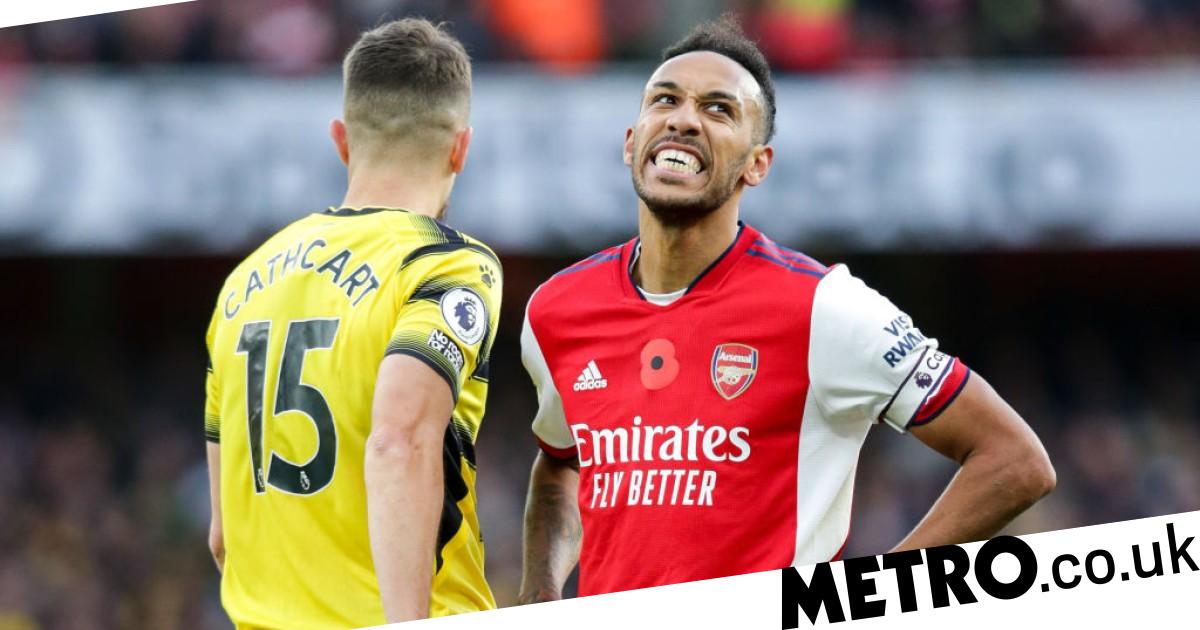 Paul Merson has slammed Pierre-Emerick Aubameyang’s ‘disrespectful’ behaviour but insists Arsenal have brought the problem on themselves.

An eventful week in north London has seen Aubameyang stripped of the captaincy for a ‘disciplinary breach’ while the latest reports suggest Mikel Arteta has banished him from first-team training.

Arteta has refused to go into detail on the situation but it’s thought Aubameyang failed to return back from a trip abroad, which the club approved, on time.

Former Gunner Merson believes Arsenal should never have handed the 32-year-old a new three-year deal last summer as his performances have gone downhill since.

‘Arsenal have got what they deserved with Pierre Emerick-Aubameyang because they never should have given him that contract,’ Merson told the Daily Star.

‘He’s on far too much money for his age, he hasn’t been the same player since he signed it, and he shouldn’t come back into the team now in my opinion.

‘If anyone offers him £350,000-a-week elsewhere I’d drop him off there but Barcelona have got no money and I don’t see how they could afford even half of his wages.

‘Arsenal for me are in this situation again because they let him run down his contract and then gave him a lorryload of money. It’s like Mesut Ozil all over again.

‘Aubameyang is a great finisher with great pace. But he’s 32. They must have realised he wasn’t going to get any quicker…’

Arteta has confirmed Aubameyang won’t be available for selection for their next game against Leeds on Saturday.

It’s led to speculation his time in north London could be coming to an end and Merson feels if a club comes in with an offer they should move him on.

‘I hope his sick mother is alright. And I know he had permission to go and see her. But if you’re told when to be back and you don’t turn up, that’s poor,’ he added.

‘That’s twice now he’s been axed for breaking the rules. That shouldn’t happen to a 20-year-old let alone the captain. It’s disrespectful.

‘Ask Tony Adams or Thierry henry how proud they were to captain Arsenal. It’s an honour. But it doesn’t seem to be for Aubameyang.

‘He can’t come back into the team this weekend. No chance. They played too well without him. And if they can rid of him they should.’


MORE : ‘You are nobody!’ – William Saliba reveals how he reacted to Mikel Arteta’s Arsenal snub


MORE : Pierre-Emerick Aubameyang no longer training with Arsenal first-team after being frozen out by Mikel Arteta