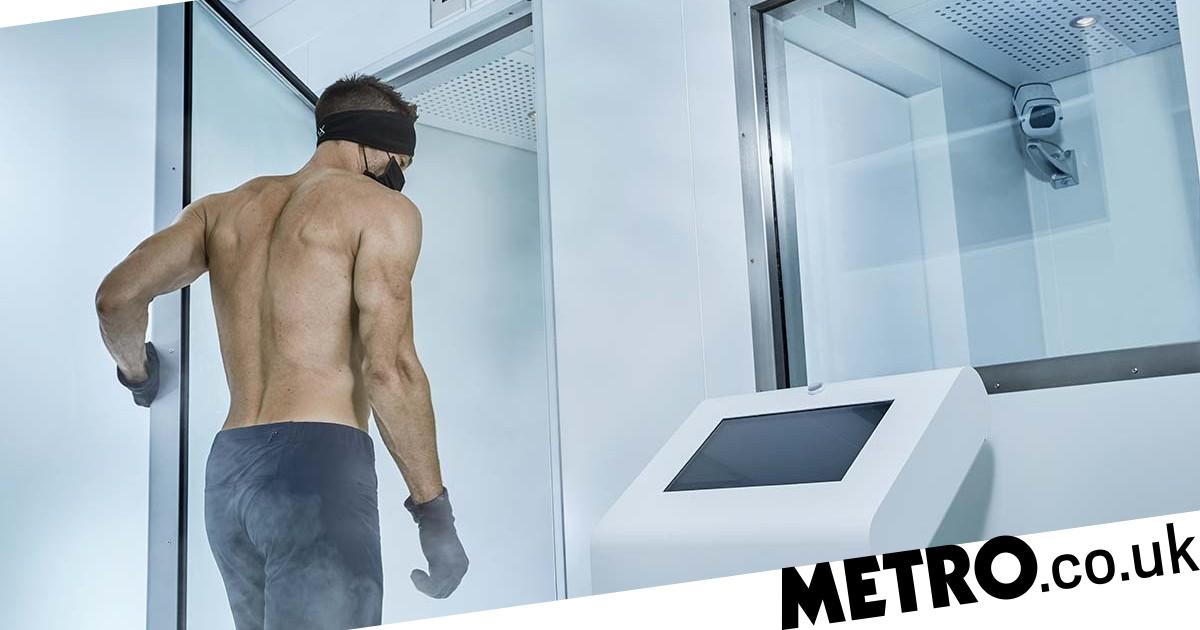 ‘Would you like some techno or dance music?’ the spa therapist asks as I prepare to subject my body to -110 degrees Celsius.

I had landed in the exclusive Lanserhof medical and wellness centre at the Arts Club on Dover Street to try out the facility’s cryogenic chamber and apparently music is a way of distracting you while you stand almost naked in death-inducing temperatures.

Cryotherapy has become increasingly popular, with proponents stating that it can improve mental and physical health and prolong life.

It has a staunch celebrity following, with everyone from Jennifer Aniston to Daniel Craig among the cryo brigade, and US inspirational guru Tony Robbins even has a cryochamber in his home for daily use.

Everyone I speak to at the Lanserhof while touring the rabbit warren of a place tells me how much I will love it, but their constant reassurance makes me all the more nervous.

The cryotherapy chamber is located in the basement of the health facility, along with other high-tech medical devices such as an MRI scanner and a treadmill that tracks your entire body movement so you can make improvements to your posture and pace.

I am directed into a spaceship-like cryo room decked out with soft neon lights and told to strip off and change into a skimpy ensemble comprising a pair of shorts and a sports bra.

Opting for techno, I take a deep breath and let the assistant guide me through the steps.

The first part of the therapy session sees me stand in one section of the chamber for 30 seconds at -60 degrees.

Once I shut the door behind me the cold hits me. It’s a strange kind of cold and not as abrupt as jumping in ice-cold water a la the Wim Hof method. It reminds me a little like the cold of a deep freezer or when you spend too long in the frozen goods aisle of the supermarket and start feeling a dry kind of chill.

The techno music certainly helps to distract me from what is going on and I try to keep my breath steady.

It doesn’t seem like I’ve been there too long when the lady waves at me through the window directing me to open the robust airtight door to the next chamber.

The main chamber in Lanserhof’s cryotherapy booth is a cool -110 degrees Celsius.

This cold certainly takes my breath away and after closing the door I concentrate on keeping still and listening to the techno instead of my body crying ‘get me out of here!’.

As it was my first session I would only be spending a minute in the super cold chamber (pros can spend up to three). Each second seems like ten and I try not to move in a bid to retain my body heat.

Finally, the therapist counts me down from 10 and it is time to escape from the Siberian-esque climbs of the two booths.

After the therapy, I have to admit I feel pretty good and it gives me the same zing in my step that cold water swimming had given me in the past.

I was also very hungover before the treatment but feel reinvigorated. A friend later that day comments on how well I looked despite my late boozy dinner the evening before.

Maybe there really are some benefits in cryotherapy…

Lanserhof at The Arts Club is members-only. The cryotherapy sessions start from £50 for non-members. For more information about joining and the other services on offer visit lhtac.com

Get in touch by emailing [email protected].


MORE : London hotel The Mandrake adds ‘spiritual wellness’ packages to stays – but are they worth doing?


MORE : Six essential habits that will help you live your best life


MORE : Gemma Collins strips naked in cryotherapy chamber at temperature of ‘minus 180’ and it couldn’t be us