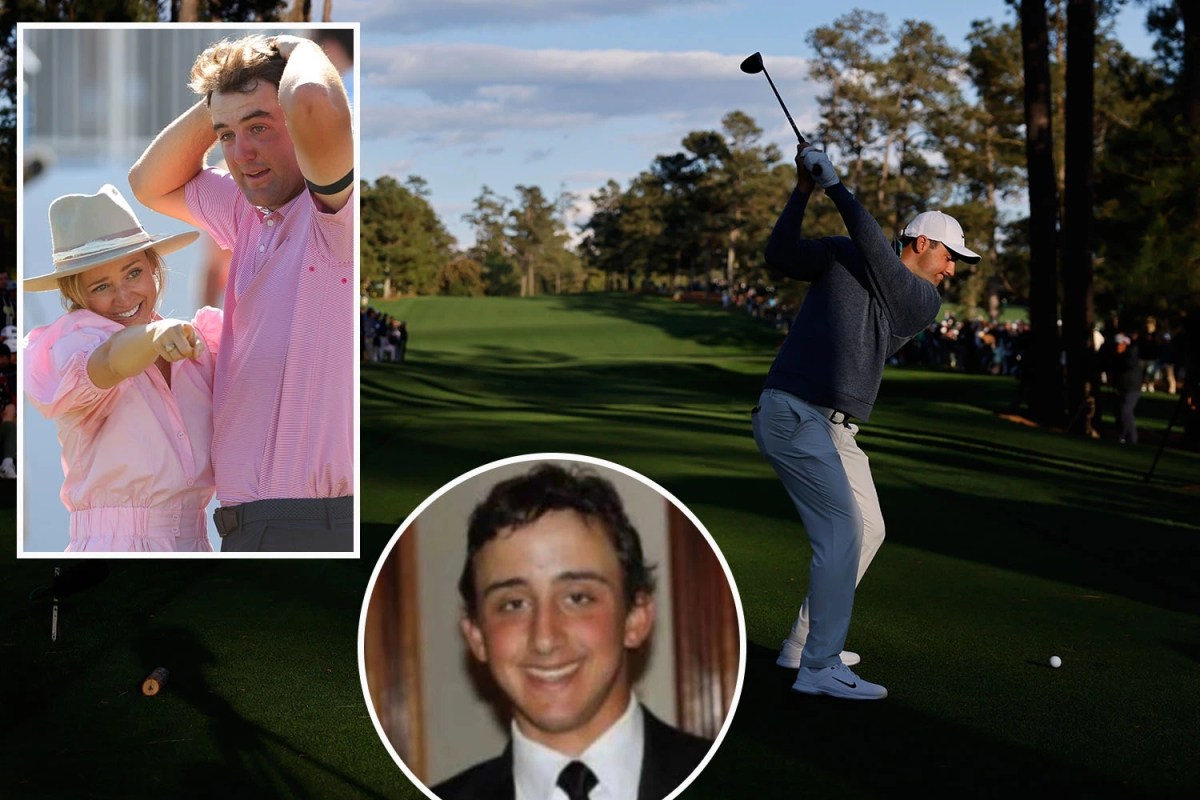 SCOTTIE SCHEFFLER bagged his first Major title after an ice-cool final round at the Masters in August.

The American star, 25, won the famous Green Jacket after holding off a resurgent Rory McIlroy on day four.

Victory for the World No1 hands him another success after notching three PGA Tour wins so far this season.

Scheffler’s parents Scott and Diane moved the family to Dallas, Texas when the golfing prodigy was just seven.

And it turned out to be the perfect switch for the budding star, who learned his trade playing at Highland Park near their home in Ridgewood.

It’s safe to say the Scheffler’s are a golfing family, with Scottie’s three sisters Callie, Sara and Molly all keen players.

The kids once all competed in the same tournament in Mississippi, where then six-year-old Sara scored the family’s first and still only double-eagle.

It wasn’t just golf where Scheffler excelled during his teenage years, with his 6ft3, 200lbs frame also coming in useful on the school basketball court.

Scottie explained to Golf Digest: “In high school, I narrowed it down to just basketball and golf.

“My whole life, I knew how much I loved golf. It was the one sport I always wanted to be playing, regardless of the season.”

Highland Park didn’t just provide Scottie with the foundations to lay his career in golf, but also saw him meet his future wife.

Scheffler started dating Meredith Scudder, with their journey culminating in a Winter Wonderland-themed wedding in 2020.

Meredith and Scottie both went to college in Texas but attended rivals campuses – Scheffler at the University of Texas and Scudder at Texas A&M.

And she revealed how he popped the question during a hike in the Arbor Hills Nature Preserve.

Scudder wrote on her Instagram: “YES! I can’t believe God gave me my best friend to spend the rest of my life with, can’t wait to be your wife, Scottie!!!! Blown away at the Lord’s faithfulness and goodness to us. [LET’S] DO THIS!!”

Scheffler remains one of the most humble players on Tour and he has no interest in big mansions or superyachts.

A devout Christian, he is not a fan of social media and prefers to stay firmly out of the limelight.

Meredith explains: “At the beginning of high school I always thought he had a super humble ambiance about him, that he was just a really down-to-earth guy that doesn’t take himself too seriously.

“Even when he had amazing accomplishments, that wasn’t the most important thing about him.”

Scheffler turned pro in 2018 and showed the world glimpses of his talent, before really exploding onto the scene in the last twelve months.

His three PGA Tour wins this season have seen both his status and bank balance skyrocket.

He’s bagged around $7.3m in prize money in the 2021-22 campaign and that could grow if he holds off Cameron Smith on the final day of the Masters.

Scheffler’s incredible rise to World No1 is even more remarkable considering he lost his best friend James Ragan to cancer just five years ago.

The inseparable duo grew up together and would also battle it out on the course, where James was a scratch player despite his diagnosis.

Two years older than Scottie, he would play tournaments with his chemo pack around his waist, hooked up to a needle in his leg.

James was diagnosed with a rare form of cancer called osteosarcoma when he was just 13, battling for seven years before passing away aged 20 in 2014.

Scheffler arranged for the Ragan family to meet up with his own before teeing off at Augusta, sorting tickets for James’ nearest and dearest.

James’ sister Mecklin said: “James would be so proud of him but he’d also be saying, ‘Yep, about time, Scottie, what took you so long?’

“They met through golf. Scottie was identified as an outstanding junior and James got down to scratch despite his illness and they played events together.

“He was two years older than Scottie but they got along straight away and became very close.

“What James respected so much about Scottie was that he saw someone who was younger than him with an incredible talent, who wasn’t wasting it.

“James would say to me, ‘I only have so many days, months, years to live, and I’m trying to make the most of what I can with my time.

“And people all around me are squandering the gifts they’ve been given. Not Scottie, though. He’s really going places.”

James helped set up a charity called Triumph Over Kid Cancer and since 2010 has raised over $3million.