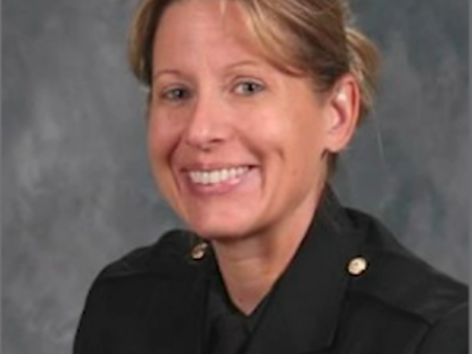 Two people are in custody after a 14-year police veteran was killed and her partner critically injured during a routine call for a noise complaint south of Chicago.

Authorities say Bradley Police Sgt. Marlene Rittmanic, 49, and Officer Tyler Bailey, 27, responded to a call about dogs barking in an unattended car in the parking lot of a Comfort Inn around 9:40 p.m. on Wednesday.

The officers had started to speak with the dogs’ apparent owner inside a hotel room when they were shot.

Both police officers were taken to hospital, where Rittmanic died early Thursday.

News outlet WPTA confirmed two people were taken into custody from a home in North Manchester, Indiana, on Friday morning.

Their identities were not immediately provided but warrants for Darius D. Sullivan, 25, and Xandria Harris, 26, who was listed as a “person of interest,” were issued following the double shooting in the small town located about 80 km south of Chicago.

Sullivan had previously faced burglary and other charges, the Daily Journal of Kankakee, Ill. reported.