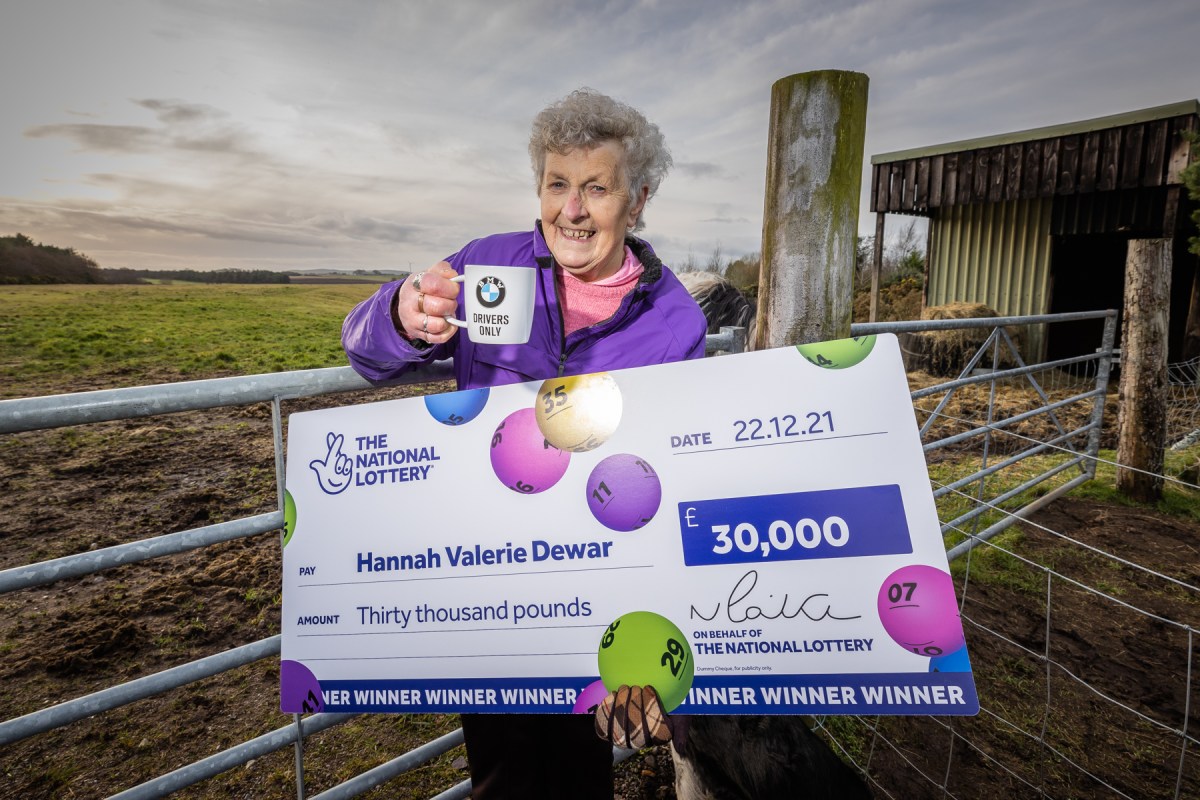 A GRATEFUL gran has kicked off the new year in the best way possible, winning £30,000 and a brand new BMW on a scratch card.

Hanna Valarie Dewar, from Tain, in the Scottish Highlands, won big on the Cars & Cash National Lottery scratchcard, after she nearly threw the winning ticket away.

Mrs “Val” Dewar said she had decided to treat herself to the scratch card after a trip to the dentist, on December 22, and was left in disbelief after she realised she won.

The 79-year-old said that she nearly threw the winning ticket away before she realised she had won the top cash prize and a brand new BMW X2, the Daily Record reported.

She said: “I had been at the dentist that day and decided to buy myself a couple of Scratchcards to cheer myself up. I remember it because I was chatting to the lady behind the counter at Morrisons who, funnily enough, was also called Val.

“Being a few days before Christmas the shop was very busy so I decided to wait until I got home to scratch them.

“I live in a farmhouse with a big open fire and normally when I have scratched the cards, and if I haven’t won anything, I just throw them into the fire.

“Strangely, that day the fire wasn’t lit and boy am I glad about that!”

Val said that she forgot to scratch the back of the card, and was about to scrunch it up and throw it away after thinking she hadn’t won.

After scratching the remaining side she said: “I was just sitting there in astonishment – I had won £30,000 AND a car!

“It was almost nine o’clock at night so it was too late to call anyone to tell them about the win.

“I had a rather sleepless night thinking about everything before I spoke to my daughter and was able to call the National Lottery in the morning.”

Val, who has lived on a farm for over forty years, spent a quiet Christmas with her daughter, son-in-law and grandchildren but they decided to treat themselves and ordered a luxury Christmas dinner from a local caterer.

She told how she thought of what to do with her winnings, one of her grandsons was dropping hints for a new tractor for his families farm: “I put that notion firmly to bed.

“I want to treat myself, although I have no idea what that treat is at the moment.”

She has decided the only one she is treating is 10-year-old Tess, the collie who is constantly at Val’s side.

Val said: “Tess is my best friend and goes everywhere with me. I have a campervan and before the pandemic, we would travel all over the Highlands.

“I really hope we can do this again soon, although Tess will be sitting in the lap of luxury thanks to the new BMW that we will be travelling in.”

Val said she doesn’t know much about cars but has already decided on a white BMW which will be delivered in the new year.

Despite the amazing luck she has enjoyed, Val said that she will also continue to treat herself to a National Lottery Scratchcard each week.

“It’s part of my weekly routine. Since I gave up smoking in 2013 I have saved the money that I would have spent and used it to buy a few Scratchcards.

“It was obviously the right decision as it eventually brought me good luck!”