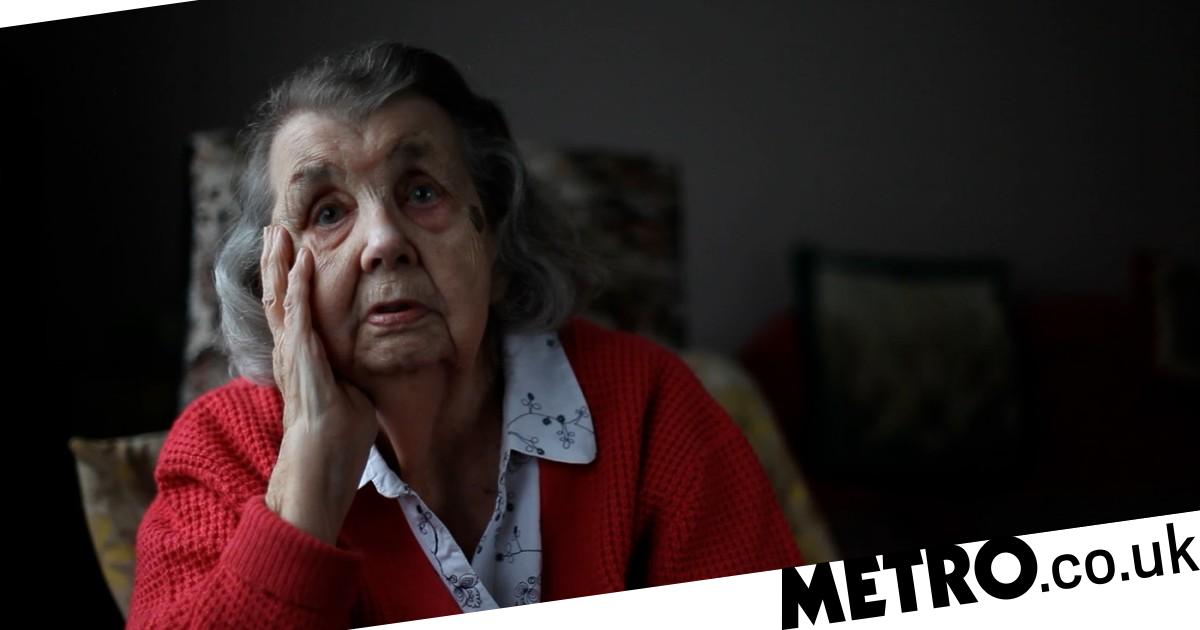 ‘Would you like a cup of tea?’ I asked my husband Peter one cold winter evening in 2015.

‘Oh yes, that’d be nice,’ he replied. I was holding his hand at the time but I noticed his breathing wasn’t normal so I just sat with him for a moment.

Within minutes, he had passed away with me by his bedside – this was three days before Christmas.

The rest of the festive period was a blur of trying to organise his funeral and I felt so numb throughout it all. That Christmas was a stark change from the laughter of our usual family celebrations.

The day I lost my husband – who was my best friend and the person I did almost everything with – was incredibly difficult. But I didn’t realise just how lonely I would become.

Peter and I met while we were serving in the forces together in Scarborough in August 1945. It was a dance social that had been put on by one of the local churches and we just sat and talked for ages. I loved his wicked sense of humour but also the fact that he was a kind man.

By November of that same year, we were engaged. We ended up serving in Egypt together for a while and both came back to the UK to eventually get married in 1948, going on to have four children.

Our marriage was perfect because we had so much in common and we did almost everything together – we loved the same books and enjoyed gardening. It was what many would consider a normal marriage.

Christmas especially was a time of joy for us. We’d never put the decorations up until Christmas Eve, but when the kids were all still at home, it’d be an activity that was a whole family affair. Peter would make Christmas dinner and we’d all come together – with my husband’s mother too – to open presents and walk the dogs.

After our retirements, things slowed down for the both of us and we spent our time in the garden, volunteering with charities and seeing our children and grandchildren whenever we could.

Then one day, when we were in our 70s, we were at the local shops on our way to the bank. I thought Peter was walking just behind me but when I turned around, I couldn’t see him. I looked all around and to my surprise, noticed he was standing in the middle of the road looking confused.

I ran up to him and asked what he was doing but he couldn’t remember where he was or why he was there. That was the first time I realised something might be wrong.

One day soon after, he was conned by a guy who was selling carpets from the back of a van. This man took him to the bank to take money out, which was completely out of character for Peter to go along with.

So we went to the doctor and he was referred to a memory clinic to check if everything was OK. That’s when they diagnosed him with dementia and we were both absolutely devastated.

From that moment, things gradually got worse. It was things like not remembering he was married or had children. Then he started to get aggressive – probably because he was frustrated that he kept forgetting what he was doing or where he was.

Towards the end, he had a really bad fall and cut his head so ended up in A&E. For the next six months or so before his passing, he was in and out of care because I couldn’t cope with it all alone.

After his death, I tried to grieve as best as I could but I quickly realised that a lot of the support networks I had built up before Peter’s health declined had disappeared. I had been so focussed with his care that I was no longer doing things like the weekly grocery shopping with my friends or keeping up with the neighbours.

I realised that I felt incredibly lonely and isolated, with no one really to talk to except for my cat.

Around a year after Peter’s death, I confided in one of my only friends about it and she told me about a notice she saw on a bus about a group called Re-engage (formerly Contact the Elderly), then she gave me their number.

I wasn’t sure about it at first but I eventually called them and they were very friendly. They gave me a form to fill out and told me they were actually starting a new small group of local elderly people.

A few weeks later, there was a knock on the door and a lovely lady named Veronica was there. She introduced herself as my driver for the social event to be held that coming Sunday, which was to be an afternoon tea.

Being there and meeting other people – some of whom were in the same boat as me – was so nice and I felt comfortable in their presence. I really liked the whole experience so said I’d be coming back for the next event a month later.

That was around five years ago and I’ve stayed as part of the group ever since. In fact, I’m one of only three originals. We’ve done some of the most marvellous things since then, including seeing Swan Lake at the Royal Opera House and going on guided tours of the British Museum.

Of course, we still love meeting up for tea at people’s homes too – or even just simply ringing and texting each other to catch up.

Through this social group, I’ve found a little family and I couldn’t be happier. The pandemic complicated things but our group’s organiser, Stephanie, and her family, have been so wonderful. They’ve delivered us medicines, driven some of the group members to hospital appointments or even just stood on my driveway to check if I’m alright and catch up.

I feel so lucky to be involved with the group and I would encourage others to reach out to their own local social groups to do the same. It’s worked wonders for me.

Even though I still sometimes feel lonely, I’ve got my cat and a whole host of friends I feel like I can call on whenever I need – and I’m forever thankful for that.

If you’re over 75 years old and interested in joining an afternoon tea hosted by Re-engage or know anyone who might be, visit their website here or call their free phone number on 0800 716543.


MORE : I know what Jessie J’s going through – miscarriage as a single mum is lonely


MORE : ‘I feel guilty for not doing better in life to support them’: Will you move your elderly parents in with you?