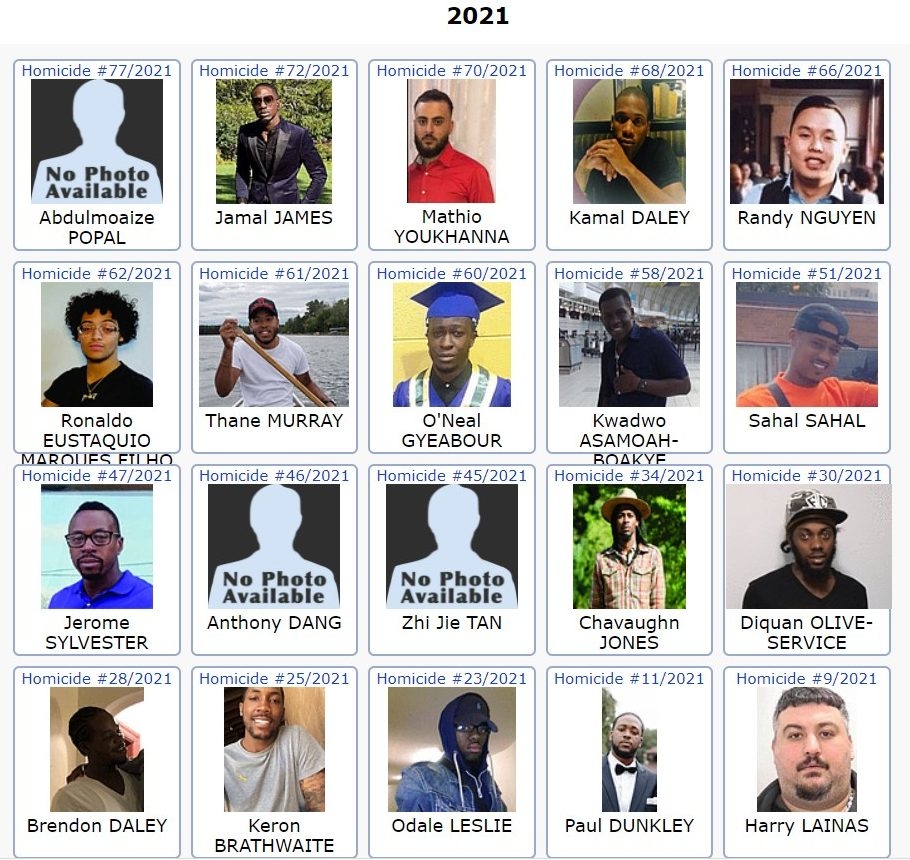 Death took a three-week holiday between Christmas 2020 and January 13 of the sparkling new year.

Of course, 2021 lost its luster quickly.

This needs no explanation.

Still, violent, pungent death arrived in all its ugliness at an apartment building Eglinton Ave. E. around 5:10 p.m. Cops said the victim of the vicious stabbing was Mohamed Jeylani, 25, of Minnesota. He later later died in hospital.

There would be no return trip to the Twin Cities. Detectives arrested Guled Mohamad, 24, of Toronto three days later and charged him with second-degree murder. The crux of the beef is unknown.

Det. Insp. Hank Idsinga, head of the Toronto Police homicide unit, has as of this writing been saddled with 84 murders with three days to go in this bloodiest of years. Guns were used in 46 of the slayings.

Idsinga told The Toronto Sun in a pre-Christmas sit-down that the usual suspects (guns, drugs, gangs) were omnipresent with a mental health component tossed in, much of it connected to the pandemic.

“Toronto is still safer than most other major Canadian cities,” the veteran detective said, adding that homicide is a “reactive unit.”

And despite the spike, Idsinga’s team still has a stellar 75% close rate — unheard of in almost any North American city. But like those bergs, Toronto is saddled with many of the same problems.

“We have a good clearance rate. When we arrest people for homicide I can’t tell you the number of times they were reading about the crime on an iPad or newspaper.”

He added: “If a positive clearance rate makes people stop or hesitate before committing a gun crime, that’s good.”

The department’s cold case squad over the past few years has solved a number of cases that have long vexed detectives, including the 1984 sex slaying of 9-year-old Christine Jessop.

“If there was new evidence that came out in say a 2005 unsolved case of mine, I would be the one to do it,” Idsinga said.

Solving homicides is time-consuming and expensive, the longtime detective said. See the investigations into serial killer Bruce MacArthur and the ongoing probe into the double murder of billionaire pharma king Barry Sherman and his wife Honey.

He added: “We’re a public entity … we have to be cognizant of budget constraints but a high clearance rate is very good value for money.”

But at times over the past year, detectives could be forgiven if they felt the kid with his or her finger in the dyke. No matter how quickly cops cleared one murder, they were soon dealing with another body.

The past week is emblematic of the nature of homicide in 2021. Theoretically, Christmas should be a quiet time — even for criminals. Not so much this year.

And on Boxing Day, death came calling for 29-year-old Jamar Hall of Toronto.

According to cops, officers responded to reports of a shooting inside a townhouse in the Humber Blvd. and Alliance Ave. area around 7:45pm. Hall was found shot and mortally wounded inside.

He was pronounced dead at the scene. There have been no arrests so far.

The bitter truth for Hall’s killer is that they have a 75% or greater chance of being caught. With those odds stacked against you in Toronto, why would you even bother?