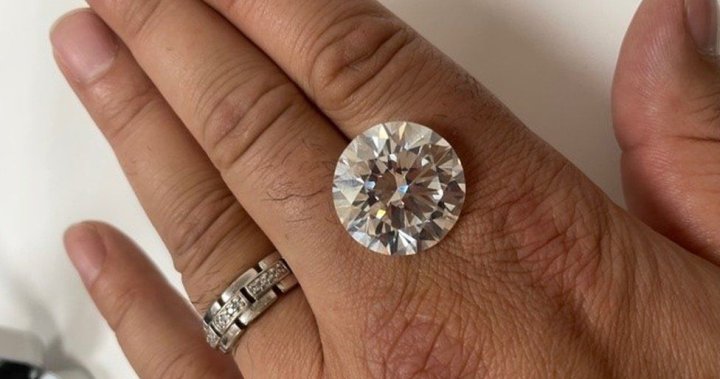 Talk about not knowing what you have.

A British woman was recently combing through some costume jewelry she’d likely purchased at a flea market years ago when she came across a rather large stone. She debated whether to toss or sell the bauble when a neighbour suggested she take it to be appraised.

Turns out she almost missed out on the windfall of a lifetime.

Mark Lane, the owner of Featonby’s Auctioneers, told BBC News the stone had been stored in a box with her wedding band and several pieces of low-value jewelry.

“We saw quite a large stone, bigger than a pound coin, and I thought it was a CZ (cubic zirconia, a synthetic diamond lookalike). It sat on my desk for two or three days until I used a diamond tester machine,” he said.

He sent the piece off for additional testing, and had a “huge shock” when experts confirmed the stone was actually a 34-carat diamond.

Given the diamond’s size and weight, the value placed on the stone is more than $3 million.

Featonby’s shared a photo of the diamond on Instagram, dubbing it the “Secret Stone.”

“The colour, the clarity, the size … to find a 34-carat diamond is off the scale,” said Lane, adding that it’s the highest-value item he’s personally come across.

The diamond is being held at a secure location in London, and will go up for auction on Nov. 30.