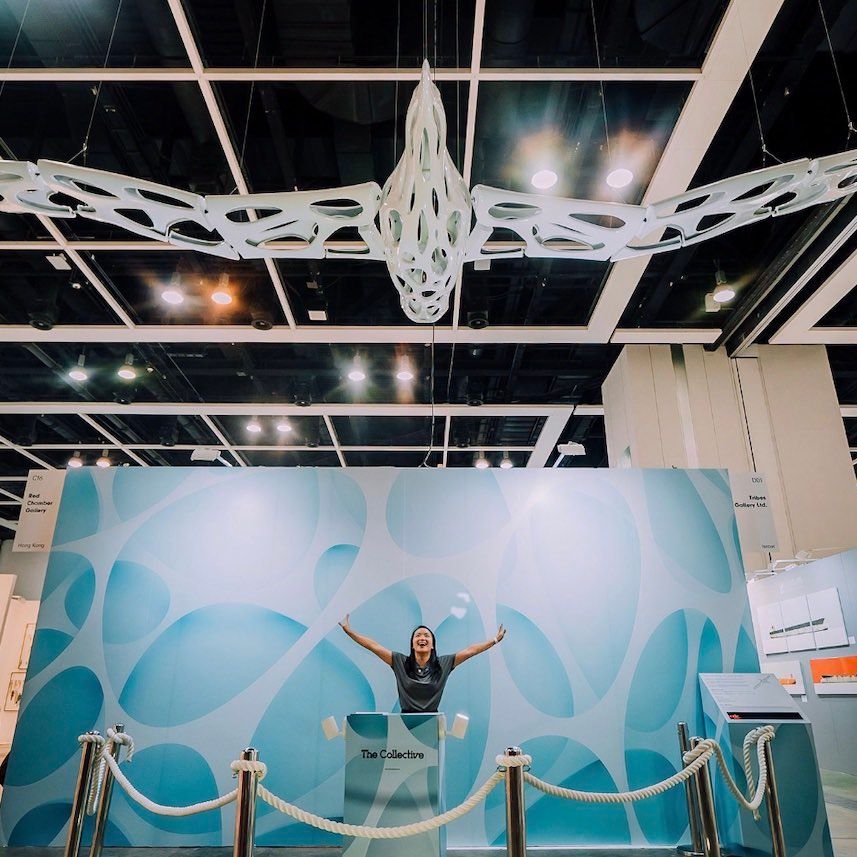 Since its founding nine years ago, digital art studio The Collective has tackled the boundaries between art and technology in numerous large-scale projects in Hong Kong and across the world. Co-founder Anita Lam sits down with Lifestyle Asia to talk about the group’s journey from a humble graphic design studio to working with major clients like Swire Properties and NGOs like the HK Wildlife Trade Working Group.

If you live in Hong Kong, chances are you’ve taken notice of The Collective’s works once or twice. Known in the industry for its portfolio of high profile and distinctly interactive pieces — we’re talking AR-animated art murals and oversized kinetic installations here — the design studio is constantly redefining art and its constitutions, bringing about a new, digital-first approach to the discipline.

Co-founders Anita Lam and Andy Stokes started The Collective as a motion graphic design studio in 2013, with one simple goal — to work with people they enjoyed working with and to do something fun together.

“From early on, our works involved strong visuals, perhaps because of our beginnings in graphic design,” shares Lam. “Four to five years ago, we realised we didn’t want to stay in our comfort zone anymore. So, we entered the tech world with more possibilities.”

Combining its expertise in visuals with new methods like 3D printing, 3D project mapping and AR technologies allowed the studio to fill up a niche in Hong Kong’s art and tech industry. Eventually, it expanded its services to engage in a range of digital and living art forms, from installations to stage performances. Covering a variety of disciplines including interaction design, lighting, animation, programming and sculpture, The Collective now focuses on the human experience at the centre of technology.

What’s special about The Collective’s works is that they are distinctly interactive. They capture and enthral their viewers’ attention — no easy feat, in a digital-first era where people are quick to lose interest and easily distracted. And in most cases, they provide more than purely entertainment for the audience and address various societal or environmental issues.

While the past two years have not been easy, in ways, the pandemic has proved beneficial for The Collective. With a smaller team, there are fewer overhead costs, meaning that the studio can now really focus on what it wants to work on, rather than taking on endless commercial projects just to keep itself afloat.

“Andy and I really love animals and are sensitive to environmental issues, so we like to take on projects that address these problems. Just like our goal when we first started The Collective, we want to work with people we enjoy working with and do things we like to do — and hopefully, at the same time, bring some positivity to the city.”

A commission for East Hotel Hong Kong for its Art at East Program 2021, City Symphony is a series of sound interactive installations exhibited at the hotel from August to October 2021.

“East Hotel wanted a piece of interactive art about the community of Taikoo Shing,” says Lam. “We came up with the idea to highlight the unique qualities of the neighbourhood using sound.”

The Collective curated five ‘sound monsters’ that together, formed the titular City Symphony. When interacted with, these monsters would trigger specific soundtracks collected from around the Taikoo area. The goal was to take ordinary objects from everyday life, or common sounds that are usually overlooked, and present them from a new perspective.

Process-wise, a sound designer collected five tracks and assigned them to five monsters that were entirely built with wood recovered from previous exhibitions. This brings us to another goal of the project beyond just creating sound installations for the community to enjoy — to upcycle waste wood material and give it another life.

“And when all the monsters were activated together, it came into a City Symphony,” concludes Lam.

Debuting at The Affordable Art Fair Hong Kong 2019, The Kinetic Albatross is an interactive art installation in the shape of an albatross flying elegantly through the sky. Covered in holes to mimic wounds on its body, it was designed to raise awareness about marine plastic pollution.

“Our kinetic albatross spanned six metres wide and greeted visitors at the entrance of The Affordable Art Fair,” says Lam. “As one of the most well-known direct victims of ocean pollution, it served as a symbol of all the animals that were also under the same threat.”

3D printed using recycled material, the sculpture was built to be fully interactive, allowing the audience to bring life to the bird by mimicking its flying gestures in front of the sensor.

“We used a custom created workflow that captured the user’s motion, so they could directly control the albatross in real time. By giving the audience full command of the albatross, we hoped to let people know that this beautiful species was in great threat and that we had a responsibility to help it and all the other animals affected by marine plastic pollution.”

Working with the HK Wildlife Trade Working Group, ADMCF and ALAN, Break the Chain is a city-wide street art campaign to stop wildlife traffickers in Hong Kong. In this collaboration, The Collective helped bring murals of trafficked animals to life using AR.

“Many people are unaware that Hong Kong is one of the biggest hubs for wildlife trafficking,” begins Lam. “This includes ivory and pangolin trades, as well as a worrying diversification of other species.”

The project was conceptualised and brought to life in 2019 during the Hong Kong protests. With an overall sombre mood and social uncertainty throughout the city at the time, the team had to brainstorm different ways to catch the attention of the public.

In the end, larger-than-life wall murals were painted in a number of districts, including Central, Wong Chuk Hang and Tuen Mun. When activated with AR, the wildlife animals in the illustrations came to life, captivating the audience and evoking curiosity.

“I would say we succeeded in our task in the end, as the government eventually took notice and changed its laws. Traditionally, only low-level ‘mules’ caught red-handed carrying wildlife were prosecuted. Moving wildlife trafficking offences under OSCO — which came into effect last August — gives enforcement agencies enhanced powers to investigate and prosecute the big organisations behind these crimes.”

Learn more about The Collective’s digital experiences on its website here.