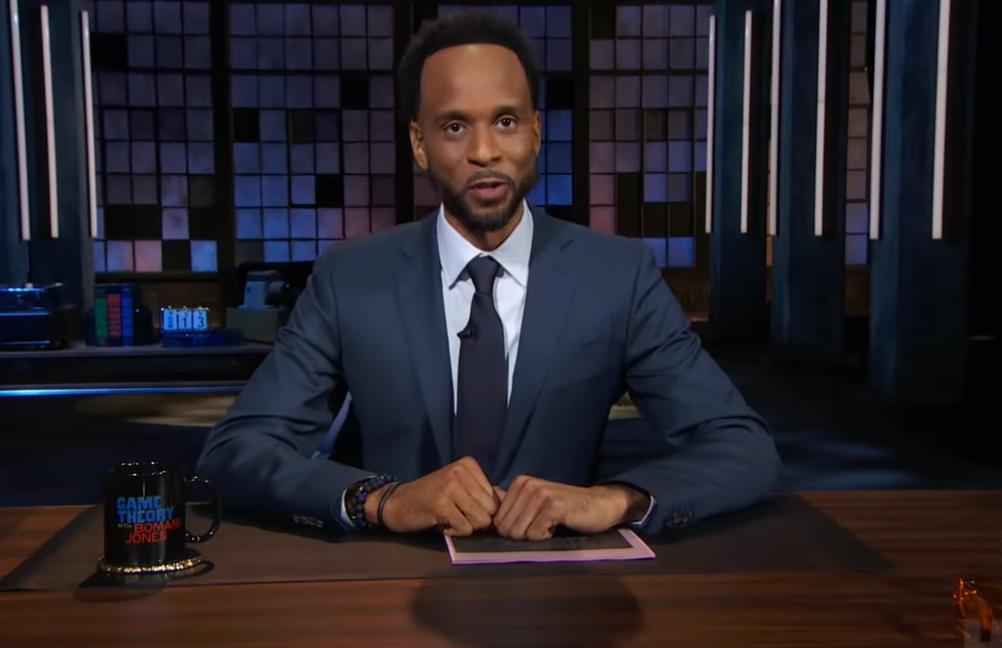 HBO’s “Game Theory with Bomani Jones” has failed to resonate with Americans after being billed as a program that “discusses timely issues that transcend the world of sports,” as critics feel the host’s habit of making so many issues about race is a major turn-off.

“It’s one of the least shocking things right now that so few people are interested in woke sports talk and venom being hurled at them, all on the basis of pitting Black and White people against each other,” NewsBusters managing editor Curtis Houck told Fox News Digital.

“Game Theory with Bomani Jones” premiered on March 13 with a dismal turnout of only 155,000 total viewers. The second week, the audience fell to only 53,000 total viewers, meaning everyone who tuned in for HBO’s newest and highly publicized offering could fit inside even the smallest NFL stadium in America.

The third episode of “Game Theory” attracted only 98,000 viewers, and the show has averaged 109,000 viewers through five episodes of its inaugural season. The alarmingly small audiences came despite “Last Week Tonight with John Oliver” averaging 519,000 viewers in the show that airs in the timeslot immediately before Jones’ program.

BIDEN HAS DONE ONLY ONE MEDIA INTERVIEW SO FAR IN 2022

The tiny audience has been treated to segments including “The truth about nepotism in the NFL,” which offered a 14-minute breakdown of why he feels a “systemic injustice” of nepotism is plaguing the National Football League. But before Jones got around to the nepotism, he made sure viewers knew racism is the league’s biggest problem.

“If Black coaches in the NFL want what the White guys have, they’ve got to work twice as hard and be half as drunk,” Jones quipped after noting that former Cardinals coach Steve Wilks was passed over for a head coaching job by a general manager that recently had been convicted of drunk driving.

“Black people have been getting passed over for jobs since our jobs became jobs and not America’s first unpaid internships. Racism in the NFL is just an offshoot of racism in America,” he continued. “And that’s why right now I want to talk to the Whites. Because the main victim of NFL hiring practices are y’all. Yes, you Bryson, put down that quinoa. Let me be your ally.”

“Game Theory with Bomani Jones” premiered on March 13 with a dismal turnout of only 155,000 total viewers.

Jones then spent roughly nine minutes largely mocking White coaches who were passed up for the children of other White coaches. “By now, I hope you are mad, White people, not because I like angry Whites, but when your self-interest is at stake, you get sh-t done,” he said at one point.

Jones has also had segments on why top college football recruits have been choosing historically black colleges and universities, cryptocurrency’s popularity in sports and the legacy of legendary Duke men’s basketball coach Mike Krzyzewski.

“We hate that he beat every team Black people loved,” Jones said of Coach K. “Ten years ago, if Duke would have played the Ku Klux Klan, we would have rooted for a 0-0 tie. However, to much of the nation, Duke basketball was like venture capital, speaking with a manager, bringing your dog to work – symbolic of White excellence.”

RACHEL MADDOW ANNOUNCES SHE’S ROLLING BACK MSNBC SHOW, WILL HOST ONLY MONDAY NIGHTS STARTING IN MAY

“There’s nothing insightful about any of this, no matter what HBO and Jones’s previous employer ESPN think,” Houck said. “Coach K being a symbol of ‘White excellence?’ It’s almost as if he’s throwing spaghetti at the wall to see what sticks and would make Joy Reid happy instead of actual, normal people of all ideologies and races.”

Jones previously hosted “High Noon” on ESPN, which was launched with tremendous fanfare in 2018 but was moved from noon to 4 p.m. and trimmed from one hour to 30 minutes before being canceled in 2020. Before that, Jones hosted “The Right Time with Bomani Jones” on ESPN Radio, but that project was taken off the platform and lives only as a podcast.

Jones’ latest venture, “Game Theory,” took him to HBO for a six-week inaugural season that wraps up on Sunday.

Outkick media columnist Bobby Burack called out the show’s struggles in a scathing piece headlined, “First season of Bomani Jones’ HBO show is an all-time disaster,” which scornfully refers to “Game Theory” as “Race Theory” because of the host’s focus on where race and sports intersect.

“The show is a disaster. Despite large promotional backing, no one watches it. HBO airs Jones directly following its top-rated show, ‘Last Week Tonight’ with John Oliver, with the hope that Oliver’s viewers will accidentally leave the channel on during Race Theory. They don’t,” Burack wrote. “On average, Jones is losing an unprecedented 80% of his lead-in’s viewership. This past Sunday, Jones averaged just 119,000 viewers, a 76% drop from Oliver’s audience.”

Burack noted that “losing more than 3/4 of your lead-in’s audience isn’t easy to do,” but Jones has managed to accomplish just that.

“HBO could have aired someone reading the newspaper and garnered more than 119,000 viewers after Oliver,” he wrote. “Since Jones causes so many people to change the channel, he certainly hasn’t attracted any new viewers to HBO. Oliver was off the week of March 22, leaving Jones on his own. How did he do? Well, he didn’t do anything. Without Oliver, Jones drew 44,000 viewers. Even a 2 am airing of ‘paid programming’ on CNBC did better than Jones did. Seriously.”

Burack’s boss, Outkick founder Clay Travis, is a frequent critic of media personalities who inject race and politics into sports. As a result, he’s mocked Jones on occasion over outlandish comments he made during his time at ESPN.

Travis caught wind of Burack’s criticism and wondered why the media industry hasn’t “destroyed” Jones the way it did when Bill Simmon’ HBO sports talk show failed in 2016.

“Bill Simmons, love him or hate him, got completely crushed over the number of people that watched his HBO show ‘Any Given Wednesday,’” Travis said before listing examples of pieces from mainstream news organizations that ridiculed Simmons’ viewership.

“Yet other than OutKick and Bobby Burack, virtually no media outlet has even covered the disaster that is Bomani Jones’ HBO show ratings. So, why do you think that is?” Travis asked.

He answered his own question.

“It’s the same reason that Bomani Jones has gotten all the shows that he’s ever gotten,” he said. “No one in sports media history has ever failed more, and been rewarded more than Bomani Jones and criticized less. Why is that? Because media is afraid if they criticize Bomani Jones they will be called racist.”