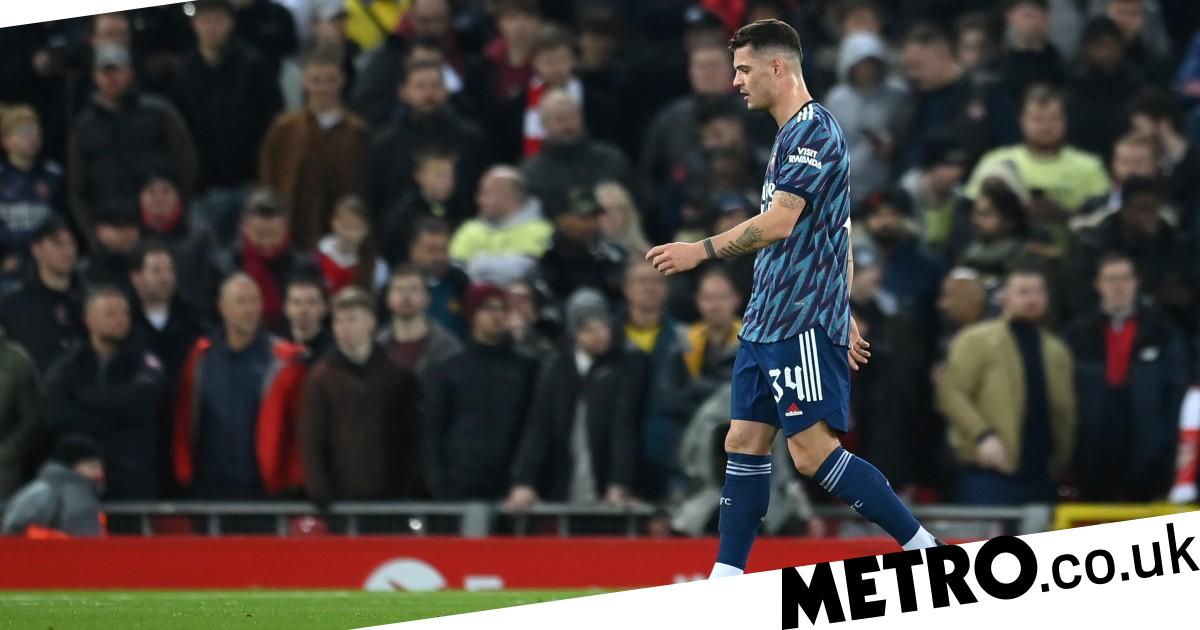 Arsenal star Granit Xhaka has apologised for his sending off against Liverpool and praised the ‘spirited’ performance his team-mates produced to come away from the Carabao Cup semi-final first leg with a goalless draw.

The major talking point of Thursday’s stalemate at Anfield arrived in the 24th minute as Xhaka booted Diego Jota in the ribs while attempting to clear the ball to safety just outside the box.

Referee Michael Oliver showed Xhaka a straight red card for denying a goalscoring opportunity and the sending off means Mikel Arteta will be without the Swiss for the second leg at the Emirates, as well as Arsenal’s upcoming league games versus Tottenham and Burnley.

The Gunners showed great character to keep Liverpool at bay with just ten men on the field but Xhaka’s suspension leaves Arteta desperately short of options in the middle of the park ahead of an important week, with Thomas Partey, Martin Odegaard, Emile Smith Rowe and Mohamed Elneny all currently unavailable.

There are also question marks surrounding the fitness of Bukayo Saka, who was forced off with an injury in the dying moments on Merseyside and is a doubt for Sunday’s north London derby.

‘I want to apologise to everyone,’ Xhaka wrote on Instagram shortly after the final whistle.

‘I am so proud of my team and the spirit that they showed to keep a clean sheet tonight. #GX34’

Speaking at his post-match press conference, Arteta said he was ‘really proud’ of the ‘fight’ and ‘commitment’ his players displayed in the wake of Xhaka’s sending off.

‘I’m really proud of what the boys did today in an extremely difficult stadium, against a great opponent and playing 70 minutes with ten men,’ the Spaniard told reporters.

‘It was about fight, spirit and commitment and as well the quality that they showed to play a game that is not in our strength.

‘It’s not what we trained, but it was what was necessary to win.

‘I told them I wanted to see a team here play with emotion that transmits everything that we talk about every day and I’ve seen that today so I’m really happy.’

On Xhaka’s red card, Arteta said: ‘I haven’t seen it.

‘I went to the interviews outside and now here so I cannot judge it because I haven’t seen the action.’

The Arsenal head coach is hopeful Saka will make a speedy recovery and return to fitness to face Spurs, with the youngster forced off in the 81st minute.

‘He felt something in the last minute, he was really fatigued,’ he explained.

‘I don’t know. He’s a young boy and he recovers really quickly.

‘But he’s played a lot of minutes in the last few months so let’s see who is available.’