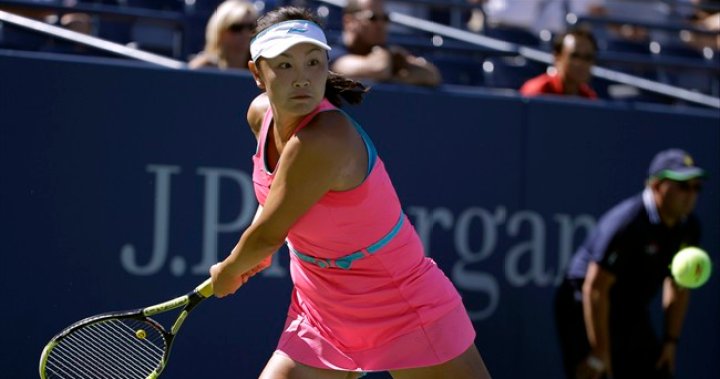 Fears are intensifying about the safety of a Chinese tennis star after the head of the women’s professional tennis tour questioned the legitimacy of an email released by Chinese state media that they attributed to the tennis player.

Peng Shuai, 35, posted on Chinese social media site Weibo earlier this month, alleging sexual assault by former Chinese vice premier Zhang Gaoli, but her post was quickly deleted and she has not been seen publicly since.

China’s state-owned television broadcaster, CGTN, released an email Wednesday morning, claiming it was written by Shuai, after concerns began mounting for her safety. The email was written in her voice and claims she is not missing or in harm’s way: “I’ve just been resting at home and everything is fine.”

Women’s Tennis Association Chairman Steve Simon shared a statement later that day confirming he had read the email, but asked for more proof that it was written by Shuai.

“The statement released today by Chinese state media… only raises my concerns as to her safety and whereabouts. I have a hard time believing that Peng Shuai actually wrote the email we received or believe what is being attributed to her,” he said.

“The WTA and the rest of the world need independent and verifiable proof that she is safe. I have repeatedly tried to reach her via numerous forms of communication, to no avail.”

As the overseas arm of state broadcaster CCTV, CGTN is among the numerous propaganda tools put in place by the ruling Communist Party. It has been sanctioned on numerous occasions by British TV regulator Ofcom for airing forced confessions by a British businessman, a Hong Kong bookseller and an employee of the UK consulate in Hong Kong.

Shuai, a former No. 1 ranked women’s doubles player and three-time Olympian, alleged she was “forced” into a sexual relationship with Zhang between 2013 and 2018, reports BBC. The Nov. 2 post was removed from her verified account on Weibo, a leading Chinese social media platform, and the country’s state-controlled media has suppressed all reporting on the case. Screenshots of the post continue to circulate online.

Speaking to reporters Thursday, China’s foreign ministry spokesperson did not share any details about the situation when asked.

“This is not a foreign affairs matter,” Zhao Lijian said. “And I am not aware of the relevant situation you mentioned.”

Read more:
2 men set to be exonerated in killing of Malcolm X

“I was recently informed of a fellow tennis player that has gone missing shortly after revealing that she has been sexually abused,” Osaka wrote. “Censorship is never ok at any cost, I hope Peng Shuai and her family are safe and ok.”

Men’s No. 1, Novak Djokovic, told NBC News Monday that the situation was “shocking” and he couldn’t “imagine just how her family feels.”

Hoping that Peng Shuai is found safe and that her accusations are fully investigated. pic.twitter.com/E9z3kjOOgS

Amnesty International echoed calls for China to prove Shuai is safe and to investigate the sexual assault allegations, saying the country has “systematically silenced the country’s #MeToo movement.”

“Peng’s recent so-called statement that ‘everything is fine’ should not be taken at face value as China’s state media has a track record of forcing statements out of individuals under duress, or else simply fabricating them. These concerns will not go away unless Peng’s safety and whereabouts are confirmed,” Amnesty International’s China Researcher, Doriane Lau, told CNN.

“Peng Shuai’s case highlights the treatment faced by women survivors of sexual abuse in China, whose allegations are routinely ignored and who are often targeted for speaking out.”

International Tennis Federation spokeswoman Heather Bowler said Thursday the governing body is in contact with the Chinese Tennis Association and is liaising with the WTA and the International Olympic Committee.

“Player safety is always our top priority and we support a full and transparent investigation into this matter,” Bowler wrote in an email to The Associated Press. “While we have not spoken to the player, we are in touch with the national tennis association in China, CTA, in the event they may be able to provide any further information or updates.”