Ezra Miller admonished a police officer for calling them ‘sir’ and explained they identified as ‘transgender non-binary’ during their arrest in Hawaii back in March.

In newly-released body cam footage from the arrest obtained by TMZ, Miller warned the officer that failing to refer to them by their proper pronouns again would be an ‘intentional act of bigotry’ and a technical ‘hate crime.’

Ezra Miller admonished a police officer for calling them ‘sir’ and explained they identified as ‘transgender non-binary’ during their arrest in Hawaii back in March; pictured 2021 in Paris

The video released by TMZ begins with Miller being buckled into the car by the officer, where they express concerns over getting their ‘nerves’ damaged due to their career in music.

‘Please just let me sit with my hands facing out so I don’t get nerve damage. I’m a musician, so my nerves on my hands are important to me. Please don’t hurt them. Please, I beg you,’ Ezra said.

‘I have nerve damage from police handcuffs from my life in New Jersey. I know you all are not those cops. But please, please do not damage my nerves in my hands again. It would be really, really awful for me,’ Ezra continued.

Later, during the car ride, Ezra corrects the officer who referred to them as ‘sir’ during a discussion about Hawaii. 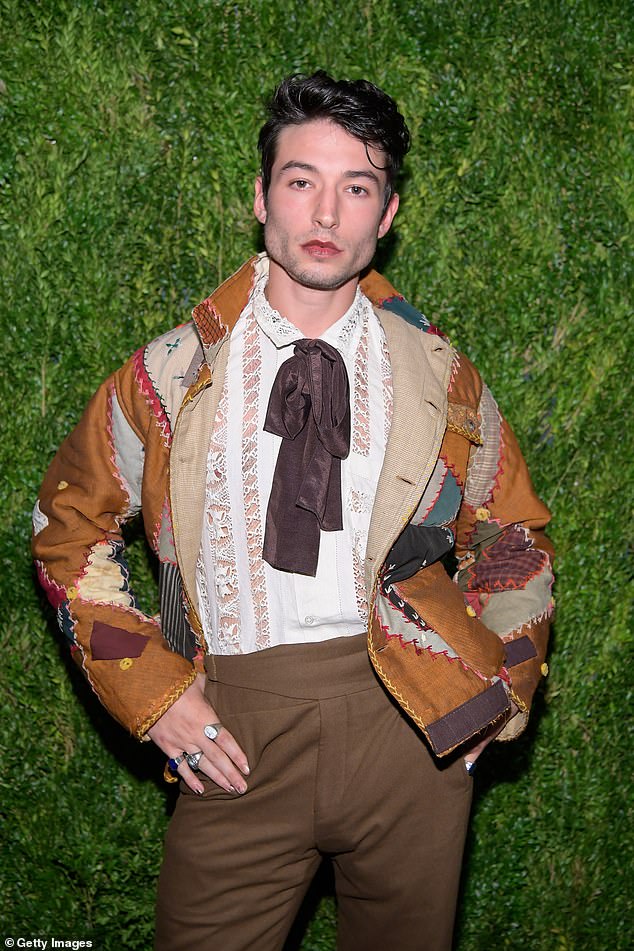 ‘My nerves on my hands are important to me’: The video begins with Miller being buckled into the cop car, where they express concerns over getting their ‘nerves’ damaged due to their music career; pictured 2018 in Brooklyn

‘I’m not a sir, I am transgender non-binary, please do not refer to me as sir,’ Ezra said.

‘Okay, I was just trying to be respectful,’ the officer explains.

‘If you fail to do that again that is an act of intentional bigotry and it is a technical hate crime according to U.S. Federal Law. Please call me they/them/theirs, you can use the term mix,’ Ezra says.

After they arrived to the station, Ezra asked the police officer to ensure their body camera is still on.

‘Is your bodycam still on? Will you make sure it’s still on?’ Ezra asked the officer, who assured them it was on.

Later, Ezra complained of pain as they were asked to stand against the wall by the police officer, who removed a watch and another item from Ezra. 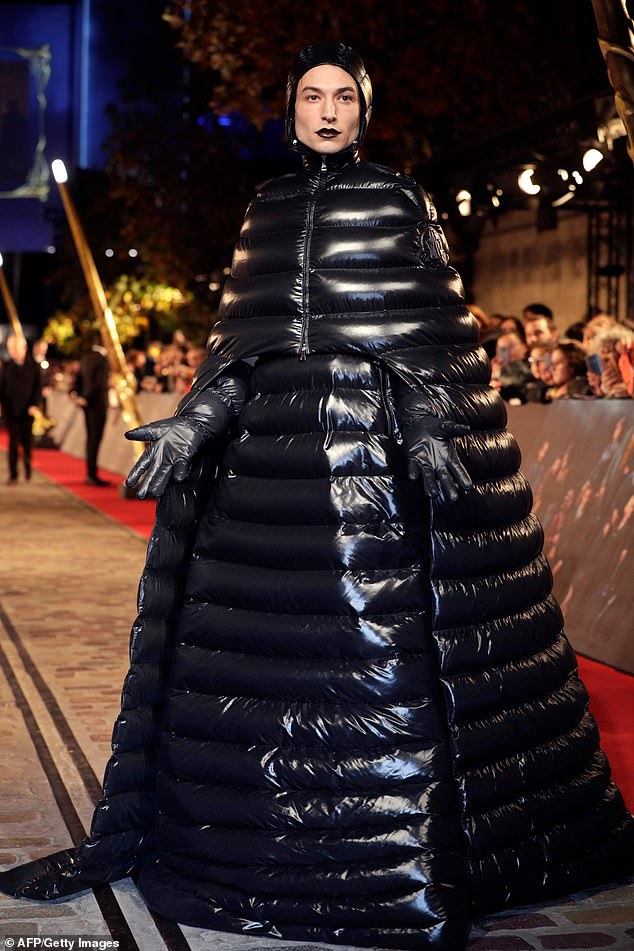 Later, Ezra complained of pain as they were asked to stand against the wall by the police officer, who removed a watch and another item from Ezra; pictured 2018

‘It’s going to hurt my wound, so please don’t do that. Ow f**k,’ they said before raising their voice.

Miller was arrested on March 28 after allegedly spitting in someone’s face in a bar during a game of darts in Hilo, Hawaii.

The footage published by TMZ is just the latest body cam footage released from the incident.

In bodycam footage released last week that was taken of their arrest at Margarita Village, the furious actor complained that they were the real victim of assault, before demanding to know the police officers’ full names and badge numbers.

Weeks after that incident, Miller faced a second arrest in Hawaii over claims they threw a chair at a woman’s head after they refused to leave her home when asked.

‘I’ve been assaulted for NFT crypto art. What’s your name and your badge number?’ they say in the body cam footage.

Miller was referring to NFTs – digital images or videos which can be sold as pieces of artwork in their original formats. 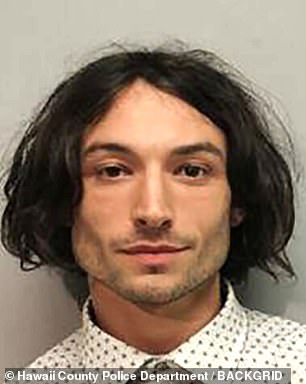 Miller, who uses they and them as pronouns, is shown in their mugshot

‘Tell me your name and your badge number! Full name!

‘I’m being arrested for disorderly conduct? I was assaulted,’ they fume.

They then talked about their ‘ninth amendment rights’ to not be ‘unlawfully persecuted for a crime of no designation’.

They were booked for disorderly conduct.

The seven-minute video also shows them being put in handcuffs and complaining: ‘Do not touch my ring!’

Miller than talks about his ‘ninth amendment rights’ to not be ‘unlawfully’ persecuted for a crime of ‘no designation’.

‘I claim my fourth amendment rights to not be searched and seized.’

‘Do not touch my ring. Hey! You just touched my penis!

‘Please don’t do that! I’m transgender non-binary I don’t want to be searched by a man!

‘I’m transgender non-binary and I don’t want to be searched by a man!

‘Those are nerf guns. Those are fake they are a toy.

‘Please don’t take them from me the flash ring means a lot to me. It’s very valuable.’ 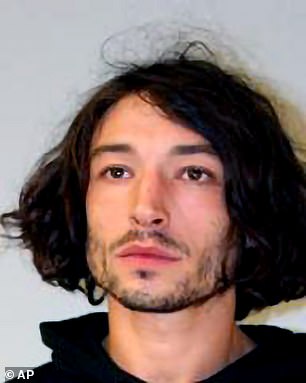 The arrest was one of several for Miller.

In April, they were arrested for throwing a chair at someone’s head at a party.

That saw the woman said to have been attacked by Miller left with a scar on her forehead after being struck by a chair she said Miller had thrown.

Miller was charged with second-degree assault over the incident.

The day after their arrest for spitting in someone’s face, Warner Bros held an emergency meeting to halt projects which they were involved in.

The March incident started when Miller was reportedly hurling obscenities at a 23-year-old woman singing karaoke. The actor also tried to grab the microphone from her mid-song.

Then later on the same night, Miller lunged at a 32-year-old man who was playing darts at the bar. Police were eventually called in to deal with the out-of-control star.

A local couple who Miller had met at a local farmer’s market and let the actor stay in their house bailed Miller out of jail on a $500 bond following the arrest, Radar reported.

The husband, who has not been publicly named, alleged that after returning home from jail, Miller had a breakdown and threatened his wife, saying: ‘I will bury you and your s*** wife.’ 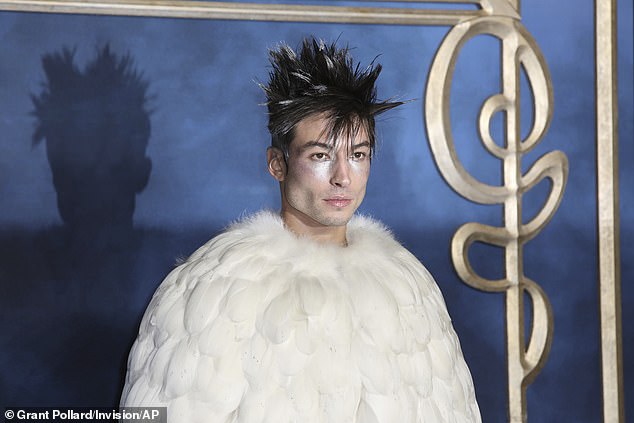 Miller poses for photographers upon arrival at the premiere of the film ‘Fantastic Beasts: The Crimes of Grindelwald’, at a central London cinema, Tuesday, Nov. 13, 2018. The actor has since had Warner Bros projects put on hold

Miller also made headlines in January when they posted a now-deleted video on Instagram threatening members of the Ku Klux Klan operating in Beulaville, North Carolina.

Miller was seen telling members of the Klan to kill themselves with their own guns, otherwise ‘we’ll do it for you if that’s what you want.’

Miller also had a run in with the law in 2011 where they were arrested for drug possession.

The actor, then 19, was the passenger in a vehicle in Pittsburgh, Pennsylvania when they were pulled over and cops discovered 20 grams of marijuana on them.

A judge would later drop the drug possession charge, but they were charged with two citations of disorderly conduct and ordered to pay a fine of $600.