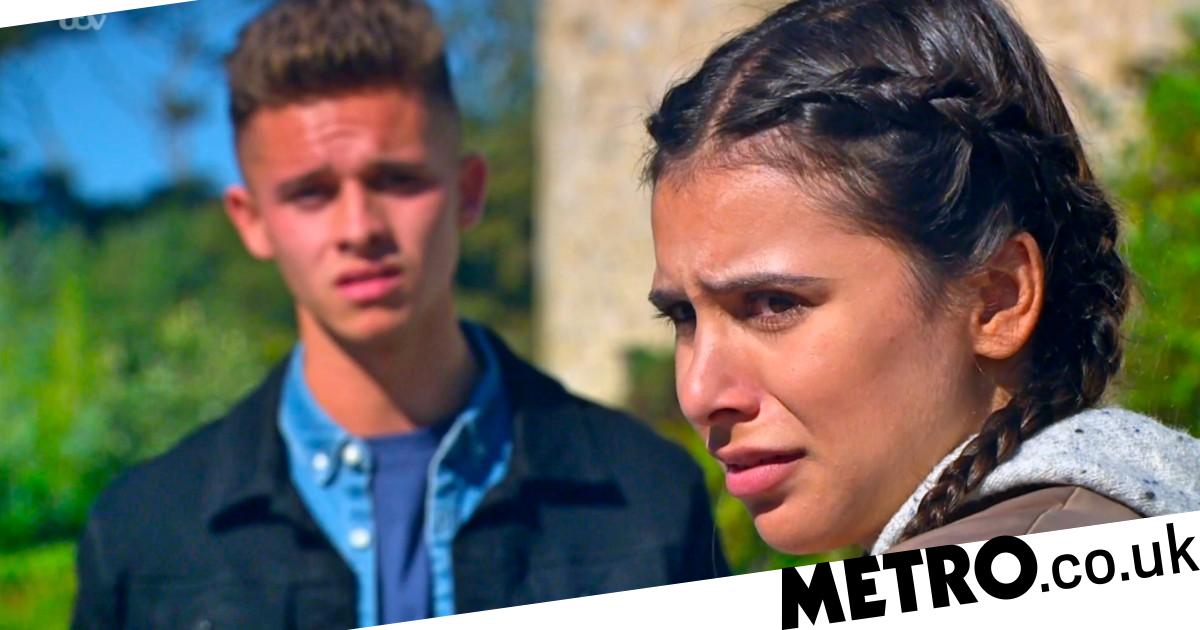 Meena Jutla (Paige Sandhu) may be gone – but it won’t be long before the killer is back in Emmerdale again.

And Jacob Gallagher, grieving for lost Leanna Cavanagh, could well show an uncharateristic dark side if he came face to face with her.

We caught up with Joe-Warren Plant as he explains Jacob’s devastation in the wake of Meena’s killer reveal, the character’s bond with Liam and whether he enjoys playing the heavy scenes.

How deep were Jacob’s feelings for Leanna? Would you say they were in love?

Although they were young I genuinely think Jacob loved Leanna. Their time together wasn’t always positive and they had their bumps but there is also a lot more to their relationship than just what is shown onscreen. It’s clear he has been severely affected by her death and is constantly battling with the regret of playing hard to get. Before he realised what she truly meant to him it was too late for Jacob. It’s something that he is going to have to cope with for the rest of his life and at the moment he isn’t dealing with it very well.

Jacob was one of the first people to get a bad feeling about Meena – does he feel he could have done or said more?

I believe Jacob has enough guilt on his shoulders as it is. Since Leanna’s death he has really been struggling and constantly blaming his actions for what happened to her. His suspicion of Meena was completely shut down by the fact she was pretty much part of the family and dating David at the time. Although Jacob isn’t stupid, it was too unrealistic of a scenario for him to imagine Meena being a killer especially when everyone quickly dismissed his speculations.

It was upsetting him that no one believed his theories so I think in ways it’s easier for Jacob to come to terms with her death by believing it happened by accident and although he had a bad feeling about Meena at the beginning I don’t think it would ever cross his mind that she could of murdered Leanna.

How is he coping after finding out the truth about what Meena did?

He isn’t coping well at all. I would say this is the most fragile state Jacob has ever been in. He’s in such shock that I don’t think he has even realised that his intuition was correct and that his bad feelings towards Meena were for good reason.

Jacob hears that Meena may have left the country – how far do you think he might go if he came face to face with her?

It’s hard to say as Jacob, deep down, is a gentle and caring person. However, Meena has put him through hell and it’s really took a toll on his mental health. I think if it came down to it and they had a standoff Jacob wouldn’t hold back at all. But his emotions always seem to get the better of him and force Jacob into situations he ends up regretting. I believe he would be more satisfied knowing she would be spending the rest of her life behind bars.

Is he scared that she might get away with this?

Most definitely! She’s not only had an incredibly negative impact on Jacob’s life but also many other people in the village have suffered from her actions. For Jacob to know that she killed Leanna, Andrea and Ben and has now fled the country he is filled with anxiety knowing there is a chance she could get away with it all. There is also a possibility of her ruining more lives elsewhere and that’s a thought that keeps Jacob up at night, worrying.

How has it been portraying this grief? Do you like exploring Jacob’s vulnerable side?

I’ve loved every minute acting out these scenes! It’s been hard no doubt but that’s what I find so special about working at Emmerdale. It gives me the opportunity to put myself in the shoes of people who have had to deal with this sort of stuff in real life. That’s the beauty of acting. When on set you sometimes use key moments or events in your life to get you into the zone when performing a scene. I’ve been really fortunate so far and never lost anyone that close to me, like Leanna was to Jacob, so it’s been difficult to try and channel these emotions when I haven’t experienced anything like it myself.

Do you think Jacob and Liam might be a long term support for one another?

100%. They have to be! We’ve seen how vulnerable these two have been recently and to move forward they both have to look out for each other. Liam and Jacob were the closest people to Leanna so automatically they have that in common, they have both lost the same girl who was significant in their lives. Rather than being at each other’s necks like we have seen, they need to transfer that energy and passion into rebuilding each other.

Do you think Jacob might advise David to stay away from the relationships for a while? The last two stepmums have not been great…

David can certainly pick suitable girlfriends can’t he…… haha! It’s not really Jacob’s place to tell him to stay away from relationships and anyway how is David supposed to know he’s dating a killer! But the part that Jacob doesn’t agree with is how he keeps managing to put himself in a love triangle with two women. However, currently, I think Jacob is more than happy with David being with Victoria. I believe they are a suited couple and have a strong potential together.