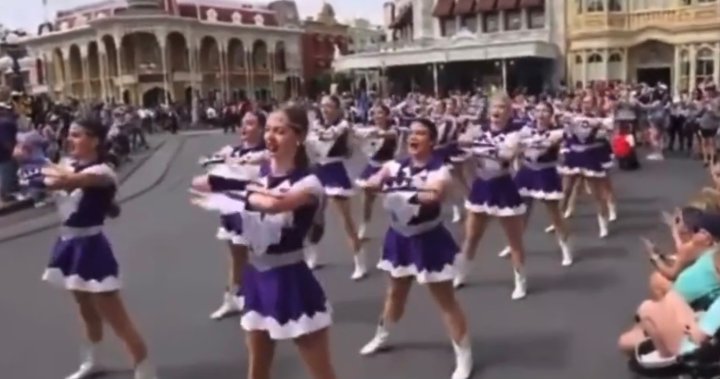 The Port Neches-Groves High School drill team, “The Indianettes,” can be seen in a video from March 15 at the Walt Disney World park, performing in purple fringed dresses, chanting “scalp ‘em Indians, scalp ‘em,” among other things.

And any Natives who attend @pngisd should prolly just accept their classmates dehumanizing them cuz “tradition”, right?

Shame on @DisneyParks hosting this. Nostalgic racism is RACISM. pic.twitter.com/ELsJHRgJlw

Disney spokesperson Jacquee Wahler said in a statement: “The live performance in our park did not reflect our core values, and we regret it took place. It was not consistent with the audition tape the school provided and we have immediately put measures in place so this is not repeated.”

The specific terms of Walt Disney World’s new measures are not known at this time.

“It would be a lot more believable that they are willing to carry out these values if they unequivocally condemn this behaviour, acknowledge their mistake and continue to try to not only increase representation, but prevent something like this from happening again,” she said.

Disney also faced further backlash earlier this month over the company’s response (or lack thereof) to the “Don’t Say Gay” bill in Florida.

Disney CEO Bob Chapek responded to criticism from employees on Twitter regarding the company’s relative silence on the controversial bill.

“You needed me to be a stronger ally in the fight for equal rights and I let you down. I am sorry.” pic.twitter.com/4px8AQbFhS

He apologized to all his employees, but especially to the LGBTQ2 community at Disney, saying, “It is clear that this is not just an issue about a bill in Florida, but instead yet another challenge to basic human rights.”

In recent years, Disney has also begun putting disclaimers on some of its more dated material, with movies like 1953’s Peter Pan now warning viewers about the film’s “stereotypical” portrayal of Indigenous people before viewing.

New Disney material is now filtered through a diversity and inclusion initiative to amplify “underrepresented voices” and champion the importance of “accurate representation in media and entertainment.”