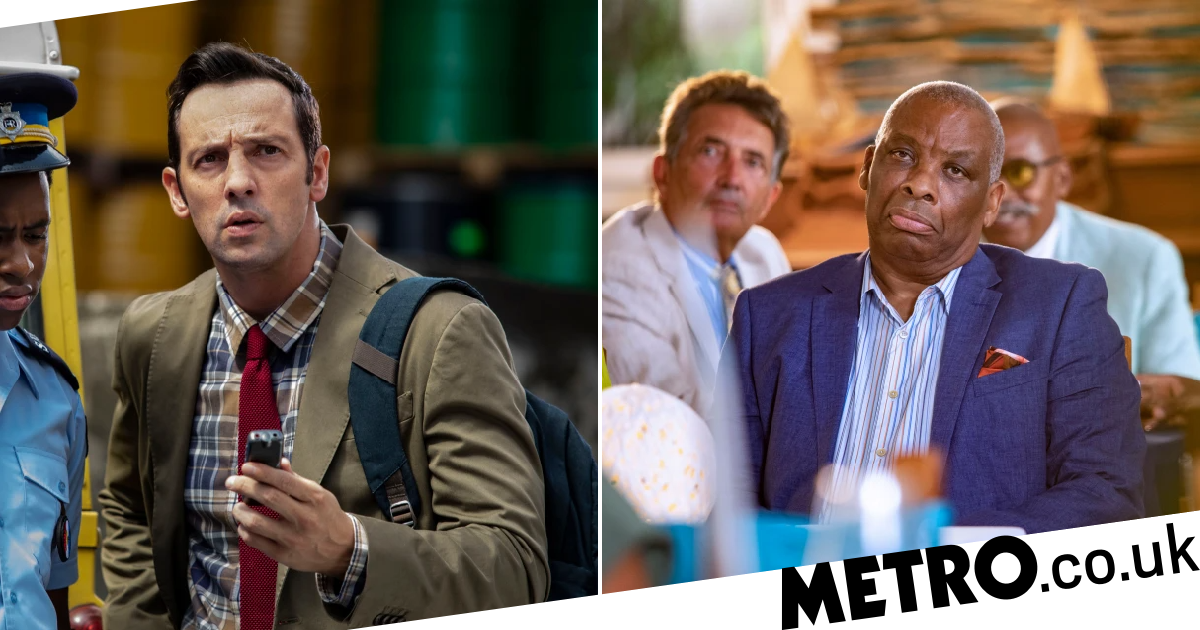 DI Neville Parker (Ralf Little) and Commissioner Selwyn Patterson’s (Don Warrington) working relationship in Death in Paradise didn’t exactly get off to the best of starts.

You don’t remember? Allow us to refresh your memory.

Series 9, episode 5. The remaining police force were awaiting the arrival of Neville after being called to what appeared to be a suicide.

Arriving on Saint Marie all the way from Manchester, Neville had a simple job: sign off on the case, jump in a taxi, arrive at the airport, fly home.

Suspicious the death may have actually been a murder, Neville handed things over to Sergeant Dumas and jumped in what he thought was his taxicab.

However, he had actually got in the back of the Commissioner’s car.

Since that all-important ‘good first impression’ went out of the window, Neville and the Commissioner haven’t really connected.

Back in series 9, Selwyn couldn’t understand why Neville had a meltdown when they were trapped on a neighbouring island (he couldn’t deal with his routine being out of whack).

For Neville, trying to read his boss is simply a case he is yet to crack – but could that all be about to change in tonight’s episode?

At the start of the series, the Commissioner made Neville host a yacht club quiz. Shaking with nerves, Neville had Florence by his side as he prepared for a very long evening.

As Neville got going and had a drink, the initial anxiety had long gone.

The point is, the overwhelming fear Neville experiences before he steps out of his comfort zone never lasts and near enough all of the time, he feels completely incredible afterwards.

Maybe the Commissioner is aware of this or maybe, with his ‘wicked sense of humour’, he just enjoys watching Neville squirm.

Either way, he is helping Neville become a better person as Ralf Little recently explained to Metro.co.uk:

‘Neville is forced into these positions where he has to confront his anxieties and his reticence and discomfort of being in these situations and every time he comes through it, it’s another victory and another rung on the ladder of being able to exist in the world without having to feel anxious about it.’

‘The Commissioner has always been an enigma as a character. He’s a puppet master, he’s at the centre of the web and thinks “if I say that to Marlon, that’s what he’s going to do”. Because he’s an enigma, you never know.’

As we chat to Ralf, he reflects on the journey his character has been on since his arrival. From competing alongside his boss in the island crab-cooking competition to last year’s secret Santa, things are definitely changing between Neville and his boss.

‘The Commissioner certainly has a level of respect for him and certainly on the surface, personal grumpy exterior with Neville, but I think we’ve played this year that Neville is starting to grow on the Commissioner. He is impressed with his work and how he’s starting to cope with life on the island.

‘Don is fabulous and there are moments where you see the Commissioner give Neville a look or a nod, and there is a real mutual respect I think, which wasn’t there at the start.’

Death in Paradise continues tonight at 9pm on BBC One.

Read the final part of our interview with Ralf next week.


MORE : Death in Paradise star Ralf Little on the importance of getting Neville’s anxieties right for series 11.