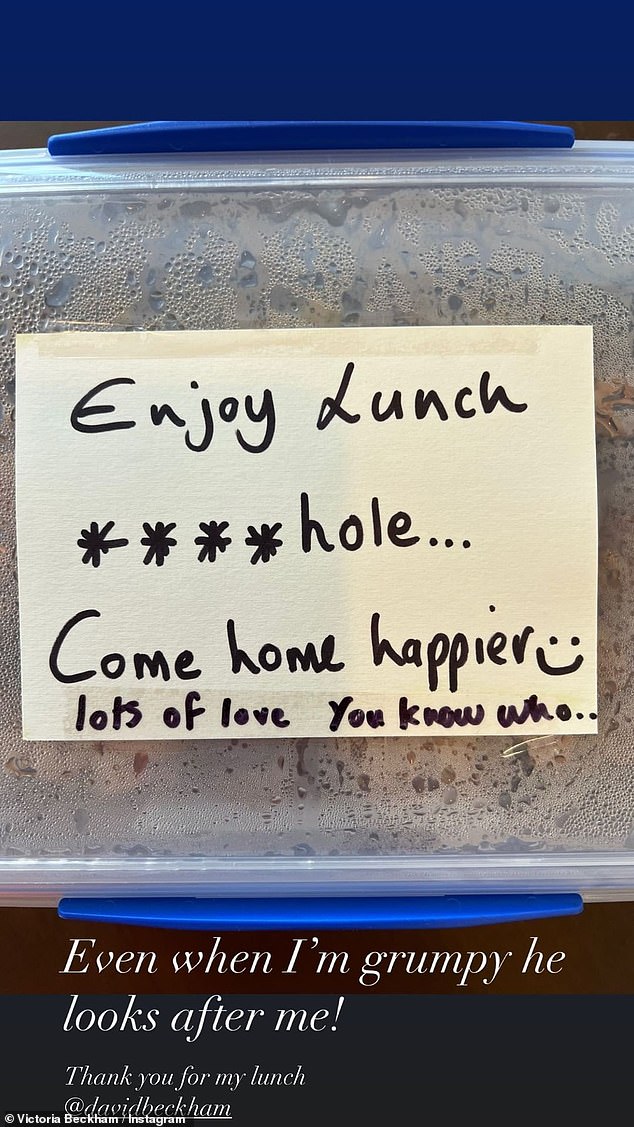 They often document their idyllic married life on social media.

And Victoria Beckham was giving an insight into life with hunky husband David on Wednesday as she shared a hilarious message he included in her packed lunch.

Taking to Instagram, the former Spice Girl, 47, revealed the sportsman, 46, had branded her ‘an a**ehole’ in an expletive-laden note in which he instructed her to ‘come home happier’ following a grouchy departure from the house.

Victoria shared an image of the Tupperware alongside the note reading: ‘Enjoy lunch ****hole… come home happier. Lots of love, you know who…’

Clearly tickled by the jibe and touched by his kindness, she wrote alongside: ‘Even when I’m grumpy he looks after me! Thank you for my lunch David Beckham.’

Victoria is not the only lucky celebrity lady to have a pen-friendly partner to hand, as Myleene Klass often shares snaps of her partner Simon Motson’s notes in her lunch.

Her latest post comes after Victoria gave fans a glimpse at her family life as she shared some intimate snaps from her Florida holiday on Instagram on Sunday. 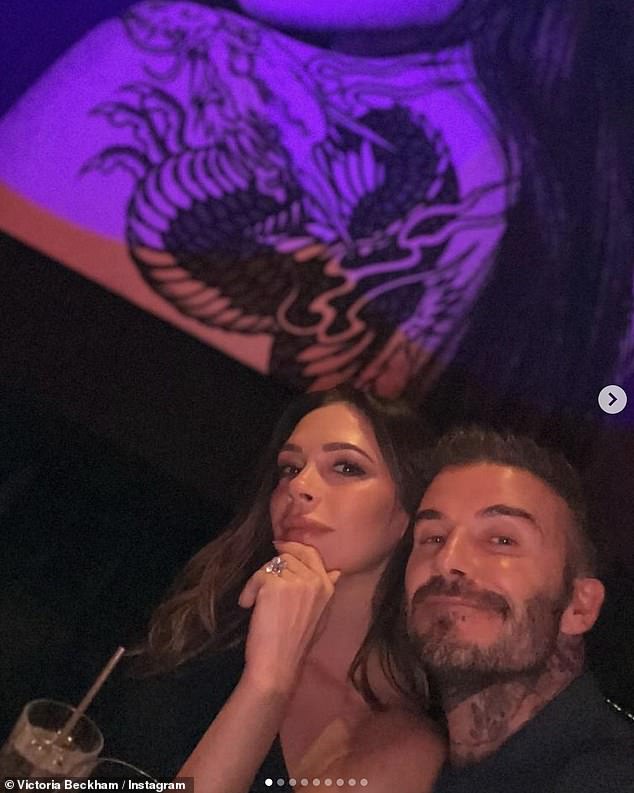 ‘Making memories’: The fashion designer, 47, and her football ace partner David, 46, put on an amorous display in an adorable selfie 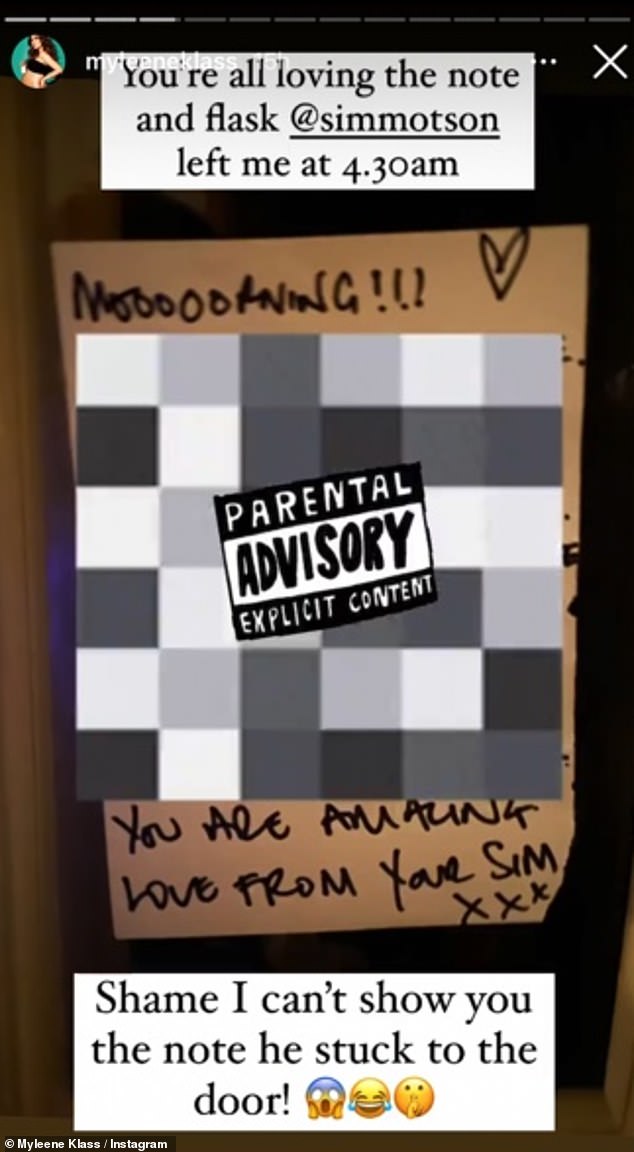 Racy! Victoria is not the only lucky celebrity lady to have a pen-friendly partner to hand, as Myleene Klass often shares snaps of her partner Simon Motson’s notes in her lunch (an X-rated not from August)

The fashion designer and her football ace partner David were joined by their children and Victoria’s parents Anthony and Jackie Adams as they relaxed in The Sunshine State, seeing in the New Year at the end of 2021.

One cheeky snap saw Victoria posing on David’s £5million 93.5ft superyacht, named Seven after his old shirt number, while clad in a pair of hotpants.

The former Spice Girl relived some happy moments from their break as they set sail from Miami for a cruise around the Florida Keys, writing online: ‘Creating family memories in the sunshine.’

In one image, David could be seen cosying-up to Posh as they enjoyed an evening out, while in another their son Brooklyn, 22, and his girlfriend Nicola Peltz, 27, sat alongside Victoria’s mother Jackie and Brooklyn’s sister Harper, 10. 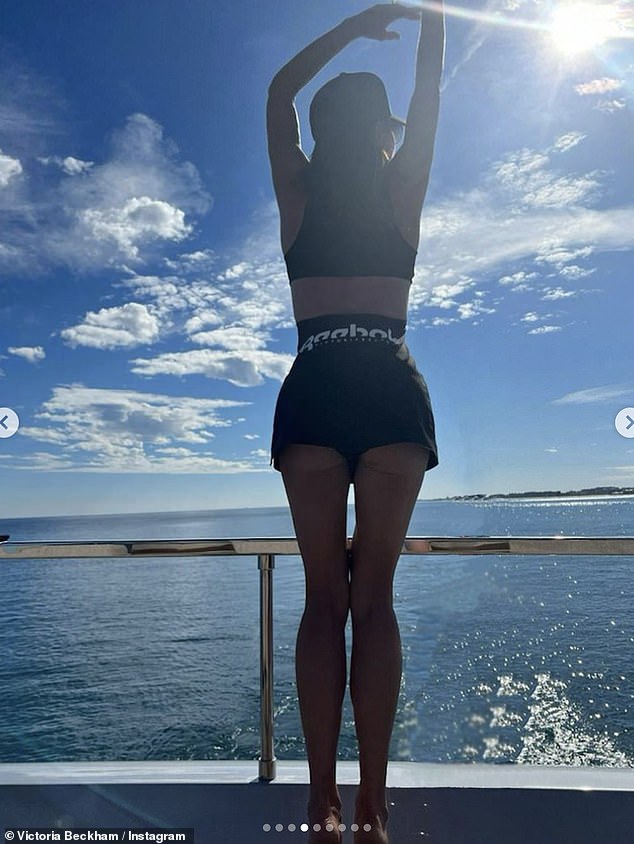 Making memories’: Her latest post comes after Victoria gave fans a glimpse at her family life as she shared some intimate snaps from her Florida holiday on Instagram on Sunday

Another photo showed Romeo’s girlfriend Mia Regan, 19, hugging Harper as they stood on a white sandy beach, while in one other Cruz, 16, stood behind his grandparents as they ate out.

It was reported last month that David had ‘treated himself’ to the the luxury vessel which he helped design after being inspired by his maritime jaunts with Sir Elton John and David Furnish – who often holiday at sea.

In the summer, David was spotted at an Italian shipyard Ferretti’s HQ in Forli where he perused the yachts and now the footballer is enjoying his new purchase with his wife and in-laws. 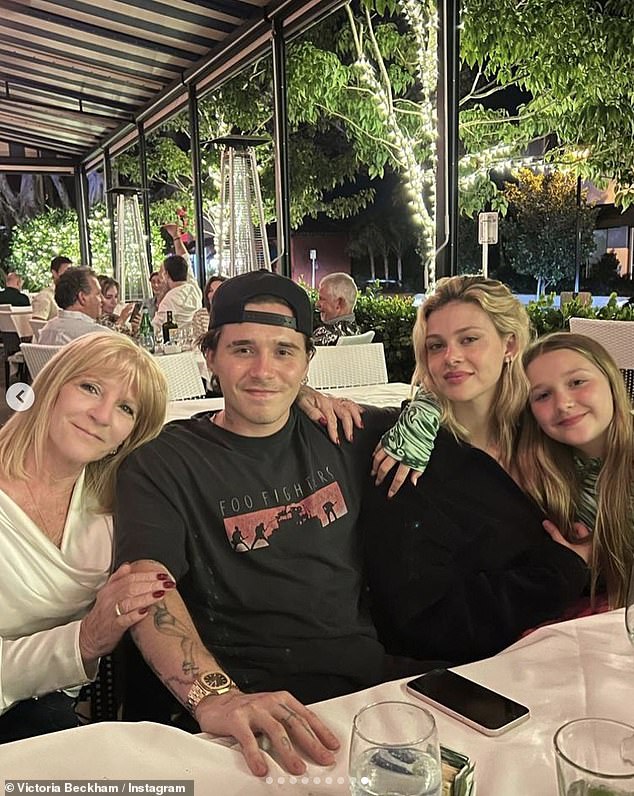 A source told The Sun last month: ‘David had a look around some yachts in the summer, and decided to treat himself. He helped design the boat himself, and has been incredibly hands-on with everything.

‘It’s not an oligarch-style super-yacht, but it’s still pretty plush by anyone’s standards. He was inspired after holidaying with Elton and David on their boat – and loves life on the water.

‘There will be an area for the kids to snorkel, and the boat will be a brilliant base for the whole Beckham clan to have magical holidays abroad.’

David proudly named his vessel after his iconic shirt number he wore for six years while playing for Manchester United, he also wore the number seven for international games for England. 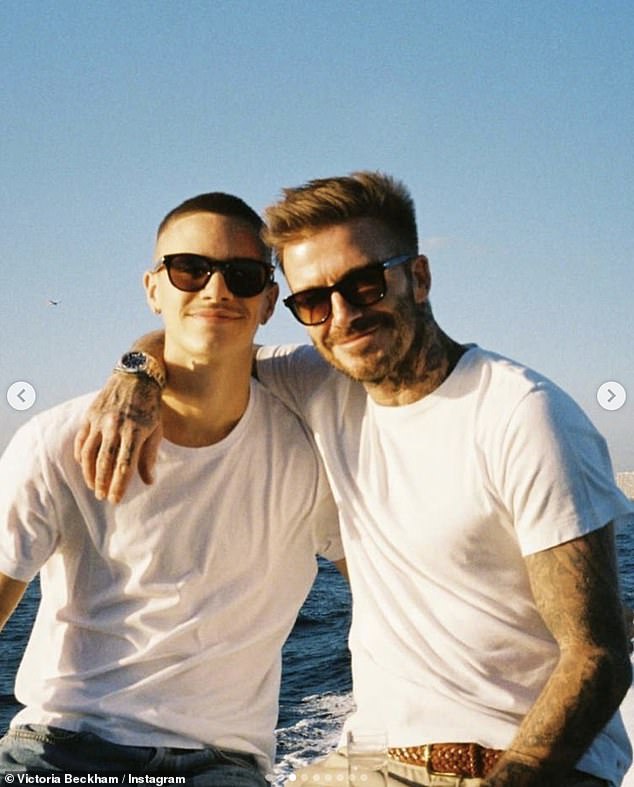 Like father, like son: The sportsman could be seen with his arm around Romeo as the pair enjoyed a boat trip in the sun