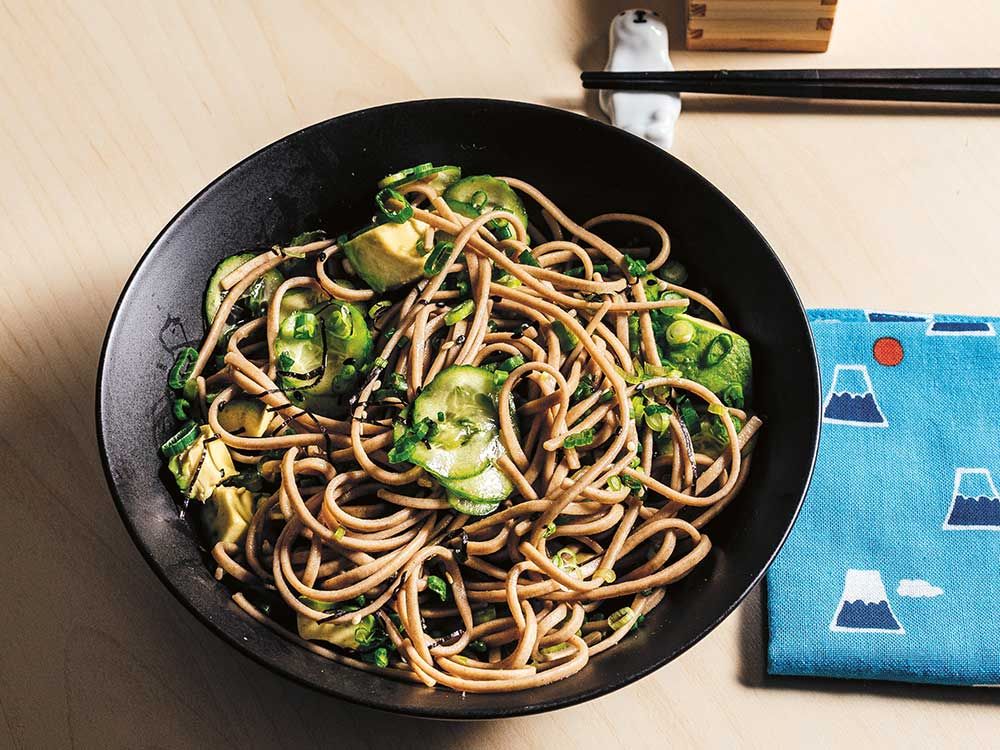 Our cookbook of the week is That Noodle Life by Mike Le and Stephanie Le. Over the next three days, we’ll feature more recipes from the book and an interview with the authors.

They weren’t always the biggest fans of the Japanese buckwheat noodle. But as soon as they had “really good soba” in Japan, that changed.

“Soba’s one of those noodles that we both fell in love with at a later date in our love affair with noodles,” says Stephanie. “Because when you think of Japanese noodles, people obviously always think of ramen. And then they think of udon next and then soba.”

In non-pandemic times, Mike and Stephanie divide their time between Vancouver, B.C., Palm Springs, Calif. and Tokyo. While they once considered soba sedate — less interesting than “the umami bomb” of a bowl of ramen — they came to appreciate its subtlety in Japan.

“When we went to Japan and we tasted freshly milled buckwheat soba, we were blown away,” Stephanie recalls. “We want everyone to fall in love with soba the same way.”

Soba may be known as a buckwheat noodle, but you’ll often find it cut with wheat flour. Since this recipe is all about the noodles, Mike and Stephanie recommend choosing one that contains a high percentage of buckwheat flour so its natural nuttiness shines through.

Though its name may imply otherwise, buckwheat isn’t a type of wheat. It’s not even a grain, but a seed related to rhubarb and sorrel. As with quinoa, it’s classified as a pseudocereal because it’s used in a similar way to cereal grains such as millet, rice or wheat.

Here, Mike and Stephanie play off its flavour and texture by tossing cold soba with an umami-rich dressing for a refreshing noodle bowl.

“People really appreciate when noodles are in bowls,” says Stephanie. “And it’s pretty and it has the creaminess of the avocado and the crunch of the cucumber.”

Combine the dashi, soy and mirin in a small saucepan and bring to a simmer over medium heat. Remove from the heat and add the bonito flakes. Let soak for 5 minutes, then strain through a sieve into a large bowl; discard the bonito flakes.

Cook the soba according to the package directions and rinse thoroughly in cold water. Drain the soba well and add the noodles to the dressing in the bowl. Toss to coat.

Plate the soba and arrange the cucumber, avocado and green onions on top, dividing them evenly. Top with microgreens, if using. Serve.

Note: Bonito flakes are the shavings of a bonito fish that’s been smoked and dried. Look for 1-inch-wide shavings in large bags imported from Japan, usually at Japanese/Asian supermarkets or online.

5x Better: Top each bowl with nori seaweed strips, a dab of wasabi paste and some toasted sesame seeds.

An umami-forward Japanese stock made from kombu and bonito flakes, dashi is the base flavour layer of almost all Japanese dishes. Making it from scratch is kind of like making tea: kombu and bonito (or one or more other dried fishes) are steeped in hot-but-not-boiling water. Bring 4 cups of water to a boil, remove from the heat, and add a 4 x 4-inch piece of kombu along with 1 cup of high-quality bonito flakes. Let steep for 10 minutes, then strain. For a shortcut, pick up dashi “tea bags;” they are super simple to use and you should be able to find them at any Asian grocery store or online. Our favourite brand is Kayanoya, an artisanal brand from Kyushu that is available online.

Recipes and image excerpted from That Noodle Life by Mike Le and Stephanie Le, photos by Mike Le. Workman Publishing © 2022.