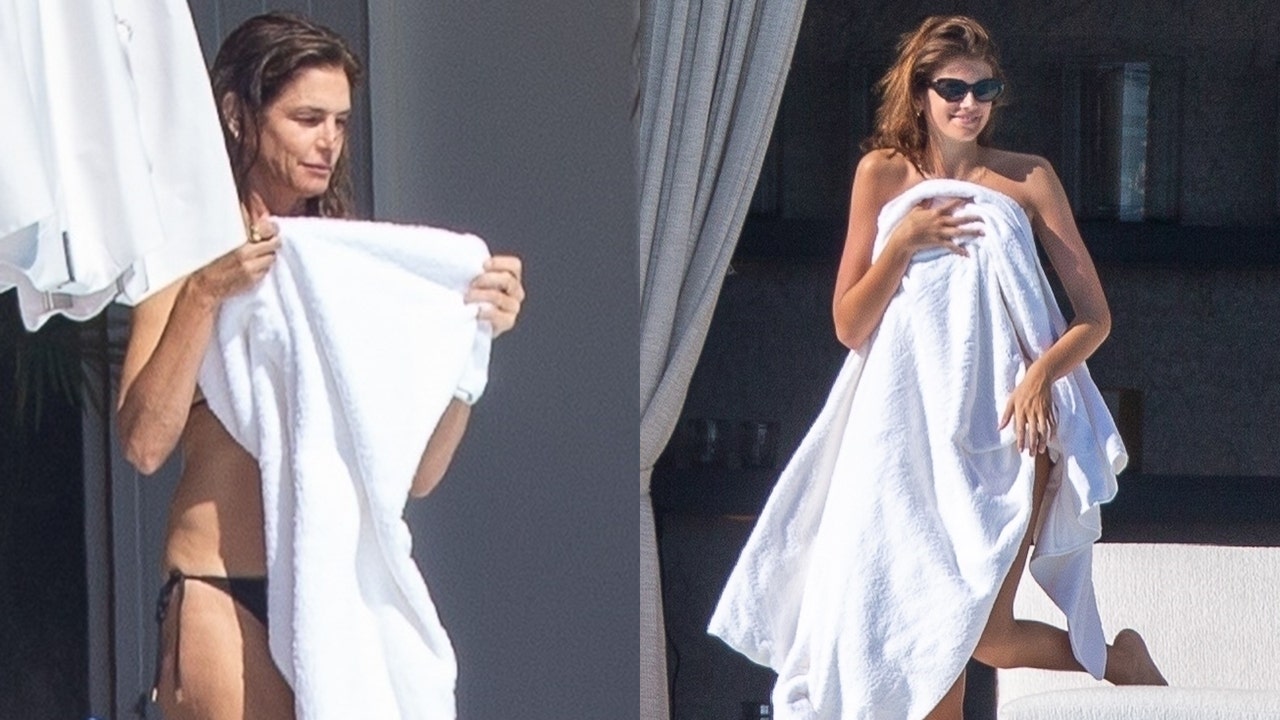 Cindy Crawford and her family headed to Cabo San Lucas, Mexico to soak up the sun after celebrating Christmas.

For the sunshine-filled getaway, the supermodel rocked a little black string bikini that showcased her camera-ready curves. Her daughter Kaia Gerber, a fellow model, wore a similar two-piece ensemble that she paired with shades.

At one point, the 55-year-old and the 20-year-old used matching oversized white towels, causing one to do a double-take over their similar famous features.

The women have been vacationing at a luxury resort alongside patriarch Rande Gerber and a few family friends. During the outing, Crawford’s daughter was spotted lounging next to an unidentified guy who was reading a book.

This isn’t the first time that Crawford, in particular, heated things up in recent months.

In August, she took to Instagram and shared a sizzling snap of herself while enjoying the sun.

The star worked the camera by wearing a sleek one-shoulder navy swimsuit that accentuated her statuesque frame. The runway icon struck a pose by a pool nearby the sea, proudly flaunting her lean frame.

“Poolside,” Crawford captioned the photo. “Soaking it in.”

People magazine pointed out that Crawford’s photo was reminiscent of her first-ever cover shot in 1982 for her high school newspaper, the DeKalb NITE Weekly. According to the outlet, Crawford was featured on the “Communiversity Issue” where she also posed beside a pool while rocking a striped bikini.

“My very first ‘cover’ during high school in DeKalb, shot in my highschool boyfriend’s backyard,” she tweeted back in 2013.

The outlet noted that it was the single portrait that led to her decades-long modeling career. Before getting discovered, the class valedictorian was on her way to Northwestern University where she had planned to get a degree in chemical engineering.

Kaia Gerber lounged next two a young unidentified guy who was reading a book.
(HEM / BACKGRID)

“When I was 16, Roger Legel, a local photographer in my small town of DeKalb, Illinois, asked to photograph me for the college newspaper,” she recalled in her 2015 memoir “Becoming,” as quoted by Vanity Fair.

“I agreed, and he shot this picture at the backyard pool of my high-school boyfriend,” Crawford shared. “I was still a teenager and dreamed of becoming something big — a nuclear physicist or the first woman president, the two biggest jobs I could think of. Doing this first shoot changed my life. The photographer encouraged me to go to Chicago to try to find an agent.”

Kaia Gerber has been hailed as Cindy Crawford’s lookalike in the fashion world.
(HEM / BACKGRID)

“At the time, my dad thought modeling was a nice word for prostitution, so my parents were very protective of me,” she continued. “I went to Chicago, ended up signing with Elite, and from there started doing catalogue shoots as well as working with Victor Skrebneski —the most important photographer in Chicago. This one photograph opened my eyes to a whole new world and started me down the path of modeling.”