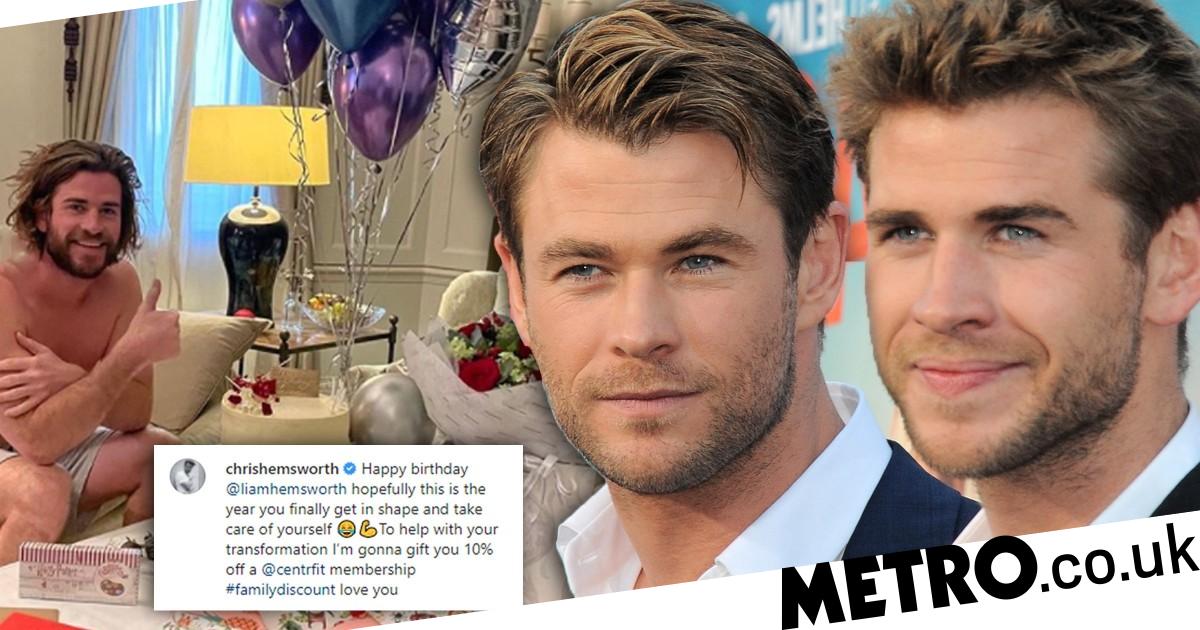 Chris Hemsworth has shared a hilarious message in honour of brother Liam Hemsworth’s 32nd birthday, advising him it’s about time he got in shape.

Sharing a photo of a clearly hideously out of shape Liam with his six pack on show after a workout, Chris, 38, wrote: ‘Happy birthday @liamhemsworth hopefully this is the year you finally get in shape and take care of yourself.

‘To help with your transformation I’m gonna gift you 10% off a @centrfit membership #familydiscount love you.’

Chris also shared a snap of Liam with longer hair, posing with a thumbs up in a pair of shorts, next to a beautiful birthday cake, flowers and gifts, as well as a display of blue, purple and silver helium balloons.

He paired the two recent snaps with a very cute throwback of Liam when he was a toddler to make the big 3-2.

Liam also took to Instagram to thank fans for their well-wishes, joking: ‘Thanks to everyone who sent me birthday wishes! Love you all!

‘These cakes that I also got sent should really help on my health and fitness journey! Cheers guys!’

Liam then recorded himself in the gym, making use of that discount, as he told his followers: ‘Hey guys, I just wanted to thank everyone who sent me birthday wishes, you guys are awesome, I really do appreciate it.’

He joked: ‘Special thank you to my brother Chris for giving me 10 percent off on a Centrfit membership.

‘I mean what a gift! The gift of health. Really appreciate it mate, it’s just the kick in the a**e that I needed to continue on my fitness journey. Here’s to a happy, healthy year everyone. Lots of love.’