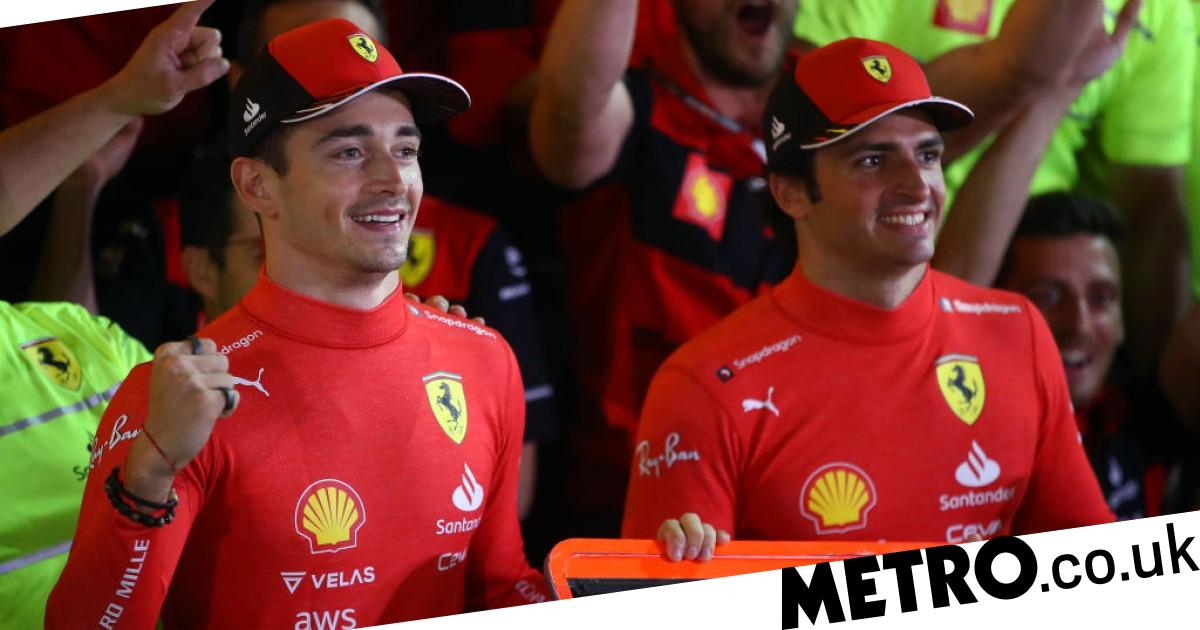 The famous prancing horse on its yellow shield illuminated the VIP tower which overlooks the Bahrain International Circuit, and all the diamond screens around the track glowed red. Ferrari is back.

The last time the Scuderia scored a one-two finish in the championship’s opening round was Michael Schumacher and Rubens Barrichello in 2004.

The current combination of Charles Leclerc and Carlos Sainz Jr look every bit as forceful.

Calm, too. Their pitstops were swift and serene, their race strategy proactive rather than reactive, and the radio messages between the pitwall and drivers told the story of a team which has its eye on the prize.

On the final lap, Leclerc even tried to unsettle his engineers with a little prank.

‘I did a bit of a joke, saying there was something strange with the engine,’ the Monegasque smiled after the race. Rather than instil a heart attack, his engineer laughed back. Ferrari knew they were having their leg pulled.

They were unassailable at Sakhir, a track which has often rewarded Ferrari — this was their seventh Bahraini victory. But they have a consistent car that will perform well at all circuits, especially fast ones, because their new power unit is a masterpiece.

Clearly, it packs more horsepower than those of the competition. Just look at Ferrari’s customer team, Haas, who have risen from being a back-of-the- grid joke to third place in the current constructors’ standings courtesy of a dream weekend for the returning Kevin Magnussen. The similarly powered Alfa Romeo, who finished 2021 in ninth, sit fourth.

Reliability is key, too, and that is where Red Bull made their blooper. This is the first season in which Red Bull Racing and their sister squad Toro Rosso are responsible for their own engines, having bought intellectual property from their previous partner Honda to form Red Bull Powertrains.

The Japanese giant still assembles the units and provides trackside support, for now, but this move towards independence is causing teething troubles, with fuel-pump failures taking Max Verstappen out of second place and denying Sergio Perez fourth with the chequered flag almost in sight.

I have no doubt Verstappen and Perez will be right back up there at the next round, but it will all be for nothing if the RB18 conks out before crossing the line. This was a gift for Mercedes, elevating seven-time champion Lewis Hamilton to a podium he never expected before this weekend.

Merc weren’t sandbagging. The W13 has issues which won’t be a quick fix, and used Sunday as a test session of sorts.

George Russell suffered the indignity of qualifying behind his predecessor, Valtteri Bottas in an Alfa. Nevertheless, he did what was expected of him to follow Hamilton home and score 12 points — the biggest haul of his F1 career to date.

‘I definitely wasn’t quite on [Lewis’] pace this weekend but I don’t think I was a million miles away,’ said the Brit.

‘We’re bouncing around everywhere. It’s costing us massive performance,’ he added, regarding the silver arrow’s ‘porpoising’ problem. ‘We’re zooming down the straight and just smashing into the ground.

‘If we can find a solution to this we’ll find chunks of lap time, but after six days of testing and this weekend we’ve still struggled to make progress.

‘I believe we will get there but don’t think it’ll be next weekend. I don’t know when it’ll be.’

At least Russell can count himself lucky he is not Lando Norris. The other young Englishman on the grid, who has committed to a long-term future with McLaren, has discovered he is piloting a pig of a car.

We knew from testing it had a tendency to overheat its brakes, but this weekend the McLaren was just plain slow. Norris finished 15th, one place behind team-mate Daniel Ricciardo.

‘We’re a long, long way off,’ said the Bristolian. ‘I’m just trying to find solutions, and solutions doesn’t mean next week we’re going to be amazing.’

The new cars, which have been redesigned to enable closer racing, did their job and F1’s bosses will be pleased.

The cars ran notably closer nose-to-tail, although the amount of overtaking was about the same as usual given the effect of DRS is not as strong as it was.

By reducing the turbulent air caused by the cars at speed, the slipstream effect has also been reduced, something Ross Brawn and his F1 management team are likely to tinker with in time.

Nevertheless, the battle between Leclerc and Verstappen during laps 17 and 19, where they traded places six times, confirmed we are set for some wonderfully fruity battles this season and beyond.