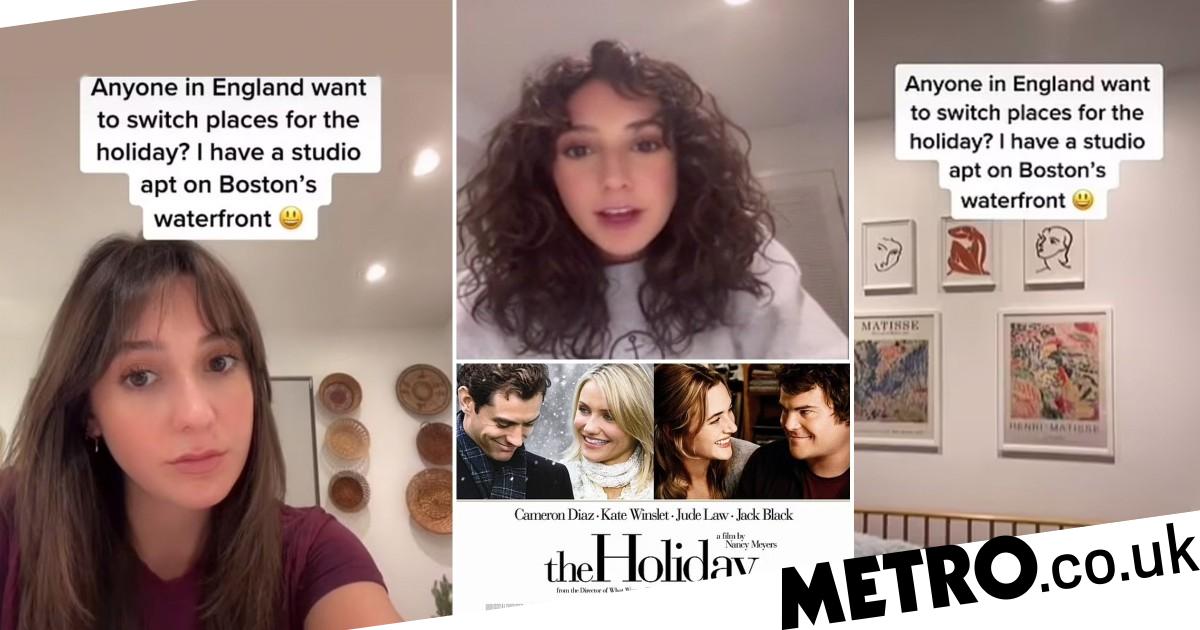 A Boston woman is switching houses with a complete stranger in the UK for New Year, after being inspired by popular Christmas movie, The Holiday.

Grace Gagnon, 25, is making the trip across the Atlantic to live in one of her follower’s houses, while the stranger will go to Massachusetts to stay in her waterfront apartment.

The proposed switch came about after Grace posted a video on TikTok.

She asked viewers: ‘Anyone in England want to switch places for the holiday? I have a studio apartment on Boston’s water-front.’

‘Serious inquiries only,’ she wrote, adding, ‘Bonus points if you have a hot, single brother.’

After garnering nearly three million views in a short number of days, Grace received thousands of replies from people who wished to house swap.

Grace says she was inspired by The Holiday, the hit romantic comedy which stars Cameron Diaz and Kate Winslet.

In the film, two women – one from a quiet English village and the other from Hollywood – decide to swap homes to get themselves out of personal and romantic ruts.

The move leads both women to find new romance in their adopted homes, and Grace is hoping to emulate this by meeting her very own Jude Law lookalike.

In another video posted to her page, the American multimedia journalist said she would introduce the lucky person to her friends to make their stay more comfortable, as well as providing a list of the best bars, restaurants and museums in the city.

Grace said she was open to switching with anyone who lived in the UK as long as she could stay over the full Christmas/twixmas period.

‘I’d like to go somewhere not for Christmas, but after Christmas,’ she explained.

‘I don’t have New Year’s Eve plans, so if I could spend it across the pond I would be so happy. But if that doesn’t work out, I’m also open to other dates in January.

‘I know there are some travel restrictions coming up with Covid so I’ll be watching the news next week and if, by chance, we’re not allowed to travel internationally then I would be open to swapping with someone on the West coast of the United States.’

Grace noted that while finding love on the trip would be a plus, it wasn’t a priority for her.

‘I am not going on this trip solely to fall in love and meet someone,’ she told her followers.

‘I’m going because I want to experience a new part of the world and live in someone else’s shoes. And if I happen to meet someone along the way, I’ll be so happy for myself.’

And it seems Grace will be able to recreate The Holiday before ringing in 2022, recently sharing that she’d officially picked someone to swap houses with.

She’s keeping quiet about all other details at present, but said she was will share more when everything is booked and set in stone.

She told viewers: ‘I’m literally booking a last minute trip to Europe for New Year’s Eve, all thanks to TikTok. I have been shaking with excitement all day.’

Send us an email at metrolifestyleteam@metro.co.uk


MORE : People are using a bowl to create perfect curls with this TikTok hack


MORE : What is cuffing season?