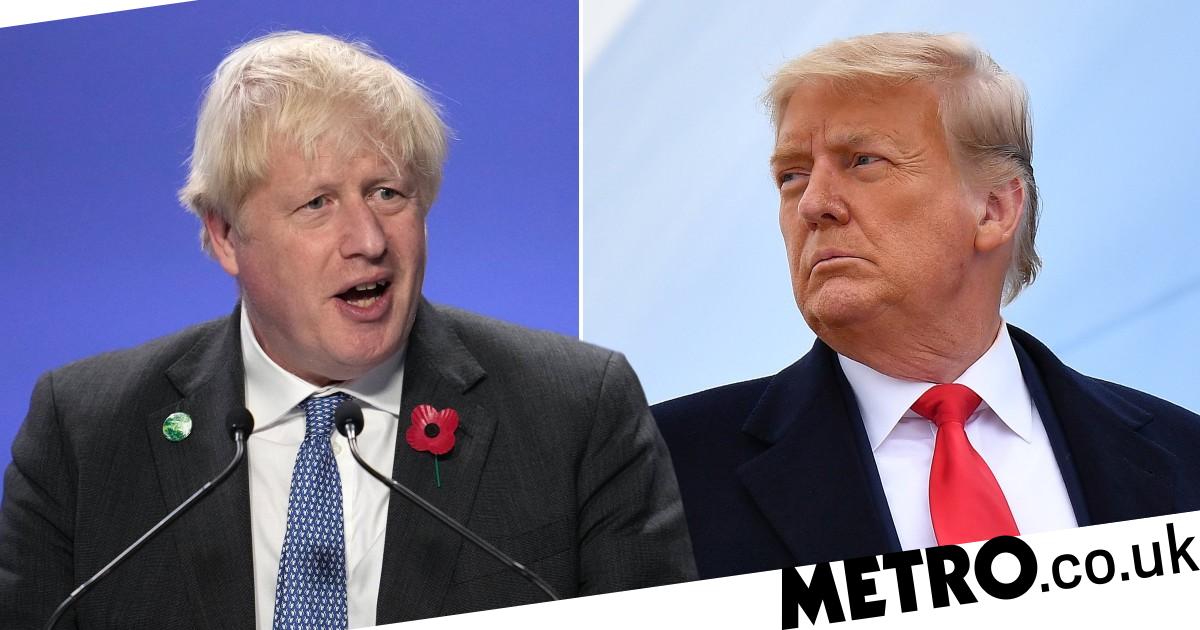 Angela Rayner has likened Boris Johnson to Donald Trump after he signalled he supported scrapping the Commons sleaze watchdog.

A Tory backbench effort to overhaul investigations into MPs was launched after ex-minister Owen Paterson was found to have flouted lobbying rules on behalf of companies paying him over £100,000.

The same watchdog conducted an investigation into the prime minister himself earlier this year after concerns were raised that he had not been transparent about who paid for his Caribbean holiday.

Speaking at prime minister’s questions, Mr Johnson confirmed he backed moves to reform how sleaze allegations are dealt with.

Labour’s deputy leader went on the attack, likening him to the ex-US president who was twice impeached.

Ms Rayner said: ‘When they break the rules, they just remake the rules.

‘I know that Donald Trump is the prime minister’s hero but I say to him in all seriousness, he should learn the lesson that if you keep cheating the public it catches up with you in the end.

‘While they are wallowing in sleaze the rest of the country is facing higher bills, rising costs and damaging tax rises.’

Mr Johnson said he supported a move to expand the appeals process available to MPs and made reference to the death of Mr Parterson’s wife.

The ex-minister and North Shropshire MP believes the probe may have been a contributory factor in his wife’s June 2020 suicide.

He disputes the damning findings of the sleaze investigation and told the watchdog ‘he would take the same course of action in similar circumstances’.

Mr Johsnon said ‘lobbying, advocacy is wrong…members who are found guilty should apologise and pay the necessary penalties’.

But he confirmed the government’s position, briefed earlier in the morning by Number 10, that the government is supportive of efforts to change the rules.

Mr Johnson said: ‘The issue in this case, which involves a serious family tragedy, is whether a member of this house had a fair opportunity to make representations in this case and whether as a matter of natural justice our procedures in this house allow for proper appeal.’

It is not clear if Tory MPs will be whipped to vote for the amendment, which will be voted on later today after being selected by the speaker.

Ms Rayner also said: ‘If it was a police officer, a teacher, a doctor, we would expect the independent process to be followed and not changed after the verdict. It’s one rule for them and one rule for the rest of us.’

The prime minister was cleared of wrongdoing by the same watchdog which investigated Mr Paterson earlier this year but received a slap on the wrist.

He was found to have not been open with investigators about a £15,000 break over New Year in 2020 at the lavish Mustique property of a Tory donor.

The commissioner said rules had not been broken but a ‘full account and explanation of the funding arrangements for Mr Johnson’s holiday accommodation has only come to light as a result of our own inquiries rather than at an earlier stage’.

Get in touch with our news team by emailing us at [email protected]tro.co.uk.