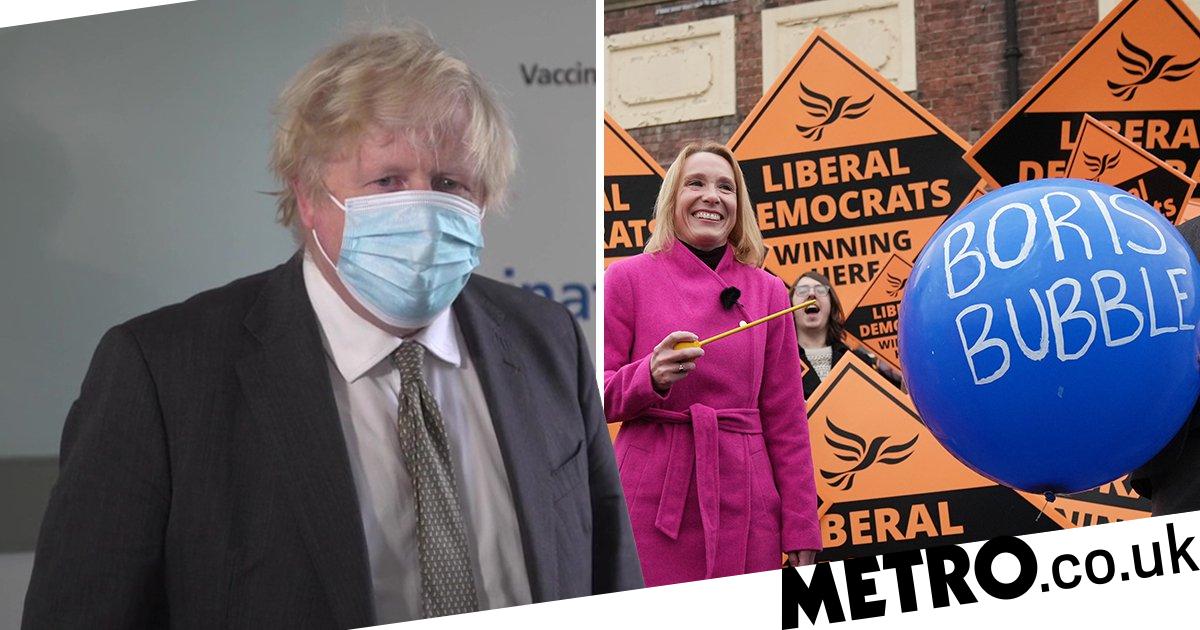 Boris Johnson has spoken out for the first time since the Tories’ North Shropshire by-election loss.

The crushing defeat saw the Liberal Democrats overturn a massive Conservative majority in the seat – which has never been anything but Tory.

Mr Johnson said: ‘I’m responsible for everything that the Government does and of course I take personal responsibility.’

But he blamed a ‘constant litany of stuff about politics and politicians’ in the media for the result.

He said: ‘I think that people are frustrated and I understand that.’

He added: ‘Some things have been going very well, but what the people have been hearing… is just a constant litany of stuff about politics and politicians and stuff that isn’t about them and isn’t about the things that we can do to make life better.’

The PM is facing questions over his leadership after the shock defeat. Former leader of the Scottish Conservatives Ruth Davidson told the BBC the prime minister was drinking in the ‘last-chance saloon’.

She said the party was looking for ‘a bit of bloody grip’ from its leader.

‘I think the prime minister’s been put on warning by his MPs,’ she said.

The result sent tremors through Westminster after weeks of damaging headlines about Tory ‘sleaze’ and reports of partying in No 10 in breach of Covid restrictions last year.

Mr Johnson described the loss as a ‘very disappointing’ result for the party.

He sidestepped questions about whether he would resign if it was in the interests of the country or his party, insisting he was focused on fighting the pandemic.

‘That is what the Government is engaged in doing now. That is what I am focused on. I think that is what people would want me to be focused on right now,’ he said during a visit to a vaccination centre in Hillingdon.

Sir Charles Walker, the vice chairman of the 1922 Committee of Tory backbenchers, said a leadership contest would be ‘completely self-indulgent’ but added Mr Johnson had 12 months at most to make a difference.

‘The Prime Minister has got weeks, months, a year to sort himself out,’ he told Times Radio.

‘If we go on making unforced errors over the next three to six months or nine months, it will become a lot more serious. It’s serious now but it’s not at a critical level yet.’

Sir Geoffrey Clifton-Brown, the treasurer of the 1922 Committee, said it was not the time for a ‘big blame game’ but that Mr Johnson needed to stop the ‘self-inflicted own goals’.

‘I want him to succeed, I am giving him the benefit of the doubt,’ he told Sky News.

‘But in doing that, as one of his seasoned backbenchers, I am asking him to think carefully how he governs the country and avoid these self-inflicted measures.’