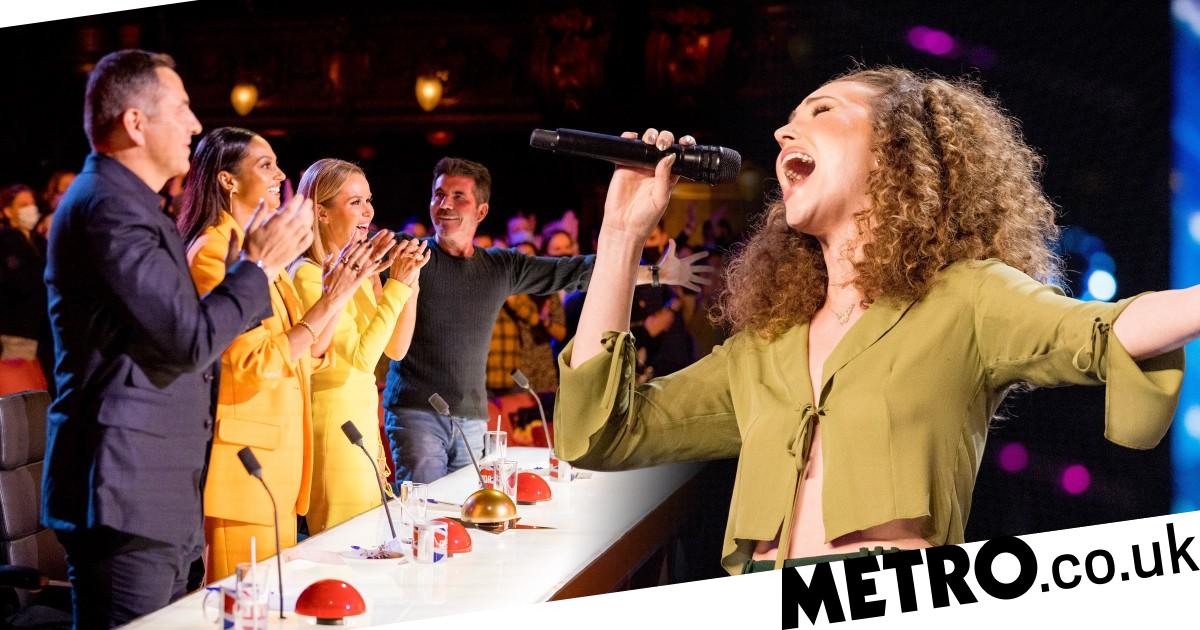 Britain’s Got Talent ended on a bang tonight with the first golden buzzer awarded to The Greatest Showman singer Loren Allred.

The American singer, who famously sang Never Enough in the smash hit movie which starred Hugh Jackman, finally won her time to shine in the spotlight, after being the voice behind Jenny Lind’s (played by Rebecca Ferguson) iconic ballad.

Loren’s iconic performance not only left the audience on their feet and screaming, and got a standing ovation from all four judges, but even received Amanda Holden’s golden buzzer.

The golden buzzer sends an act straight through to the live semi-finals regardless of what the other judges may think, but in this case, it was clear the judges’ agreed that Loren deserved it.

The emotional moment saw one audience member say: ‘She’s got the recognition she deserved,’ before Amanda said: ‘I’m absolutely shaking, I can’t believe I’ve had this incredible opportunity to give you your moment to shine, because this is it.’

Alesha Dixon added: ‘It transcended, it was other worldly.’

Simon Cowell said: ‘This is so well-deserved because seeing somebody else sing that song in that movie and not have the recognition of doing one of the most incredible vocals ever.

‘Now for you to reveal yourself to the world – it was actually one of the most incredible audition moments I’ve ever experienced,’ adding that he was ‘so happy’ for her.

‘Timing in life is everything, and maybe this is your moment now,’ he finished.

As Loren walked off the stage in shock, Alesha said: ‘Amanda’s so clever because I was so ready to do that,’ talking about the golden buzzer.

In the run up to the series premiere tonight, Loren and the BGT team defended her right to take the Britain’s Got Talent stage, after already receiving success, considering the platinum-selling song made it to the Billboard Hot 100.

A BGT spokesperson said: ‘We are thrilled to be back this year and look forward to viewers watching our BGT bumper special on Saturday and Sunday this weekend. Whilst most people will have heard the infamous Greatest Showman track, Loren is not a household name, and she deserves her spot on the BGT stage.

‘We hope that such articles will not count against somebody who is well-deserving of this opportunity.’

They went on to add: ‘It’s fantastic that Loren is now able to step out and stand in her own right to be the face, and not just the voice, of one of the most well-known tracks of all time.

Loren also defended her right to the opportunity, sharing: ‘Even though I have spent a lot of years in the music industry, people don’t know who I am. Over all these years I’ve been fighting for my chance to be known and to make it.

‘The opportunity to sing “Never Enough” evolved from being a session singer in the choir, and even though the song was a big success, people still think that the actress sang it. I have never gotten the opportunity to tell my story. That’s never happened for me.’

She concluded: ‘I am an unsigned, independent artist still trying to make a name for myself.’

In 2020, it was Ant and Dec’s golden buzzer act Jon Courtenay who was crowned winner of the Britain’s Got Talent final.

The comedian made it to the top three, along with choir Sign Along With Us and Steve Royal.

Funnyman Steve came in third place, while Sign Along With Us came in at a close second.

But in the end, the public decided that comedian Jon was worthy of the BGT crown.

Britain’s Got Talent continues on Sunday, April 17 at 7.35pm on ITV and ITV Hub.


MORE : The Greatest Showman star Loren Allred hits back at Britain’s Got Talent fix claims: ‘I’m fighting for my chance to make it’