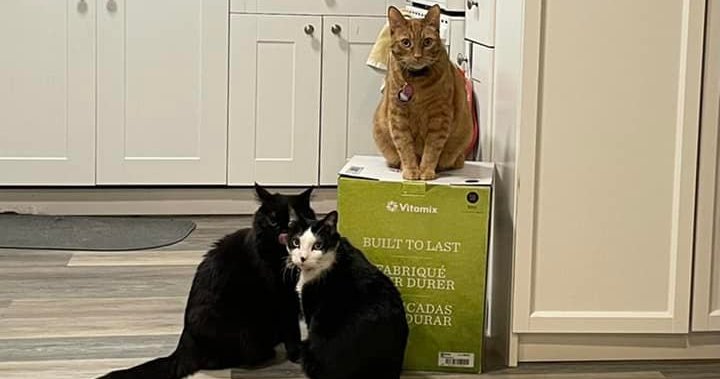 Warning: There is some strong language in this story. Discretion is advised.

A Vancouver Island couple is making headlines around the world after they purchased a blender online and it drew the attention of their pet cats.

Jessica and Nikii Gerson-Neeves bought themselves a Vitamix, and it was delivered just before Christmas.

In a saga that has been chronicled ever since on a Facebook page that now has 15,000 followers, the Gerson-Neeves’ three cats have been holding the Vitamix hostage.

5:53
Halifax woman sells couch without realizing her cat was inside

Halifax woman sells couch without realizing her cat was inside

It started with their cat, Max, also known as the “sentient soccer ball,” jumping on top of the box and sitting there.

By day two, the couple’s three cats were all involved, including George, also known as “destroyer of worlds,” and Lando Calrissian, also called “dust bunny.”

As the deadlock rolls on, the felines take turns sitting on top of the box and never allow their owners to access the Vitamix.

On Jan. 2, more than two and a half weeks after the face-off began, the couple had reached out to Vitamix Canada for help.

“We write to you because it has become clear at this point that without herculean intervention, we’re never going to get to use the new blender we’ve been longing for for years,” Jessica wrote. “Despite what many people have suggested, we aren’t writing to request additional Vitamixes—that would be ridiculous, and while we’re definitely ridiculous, we’re not quite that ridiculous.”

They asked the company for three empty product boxes, as “cardboard boxes seem to lack the appeal of the Vitamix box,” she added.

“I both dread and look forward to hearing your response, and encourage you (as I’m sure you are finding yourself with the urge to do so) to spread it to your colleagues as widely as you would like in order to laugh at the absolutely bonkers middle-aged lesbians who are losing a stand-off with their cats.”

On Jan. 3, the impasse took a turn when the pair returned home with some Christmas gifts, including a Cuisinart ice cream maker.

After setting that box down briefly, Max, the sentient soccer ball, jumped on that box.

Luckily, the owners were able to retrieve the ice cream maker, but the standoff with the Vitamix box drags on.

However, after putting one of the boxes together and attracting some initial interest, the couple saw their pets quickly abandon it for the “one true box.”

Global News has reached out to Jessica and Nikii Gerson-Neeves for comment on their online fame.