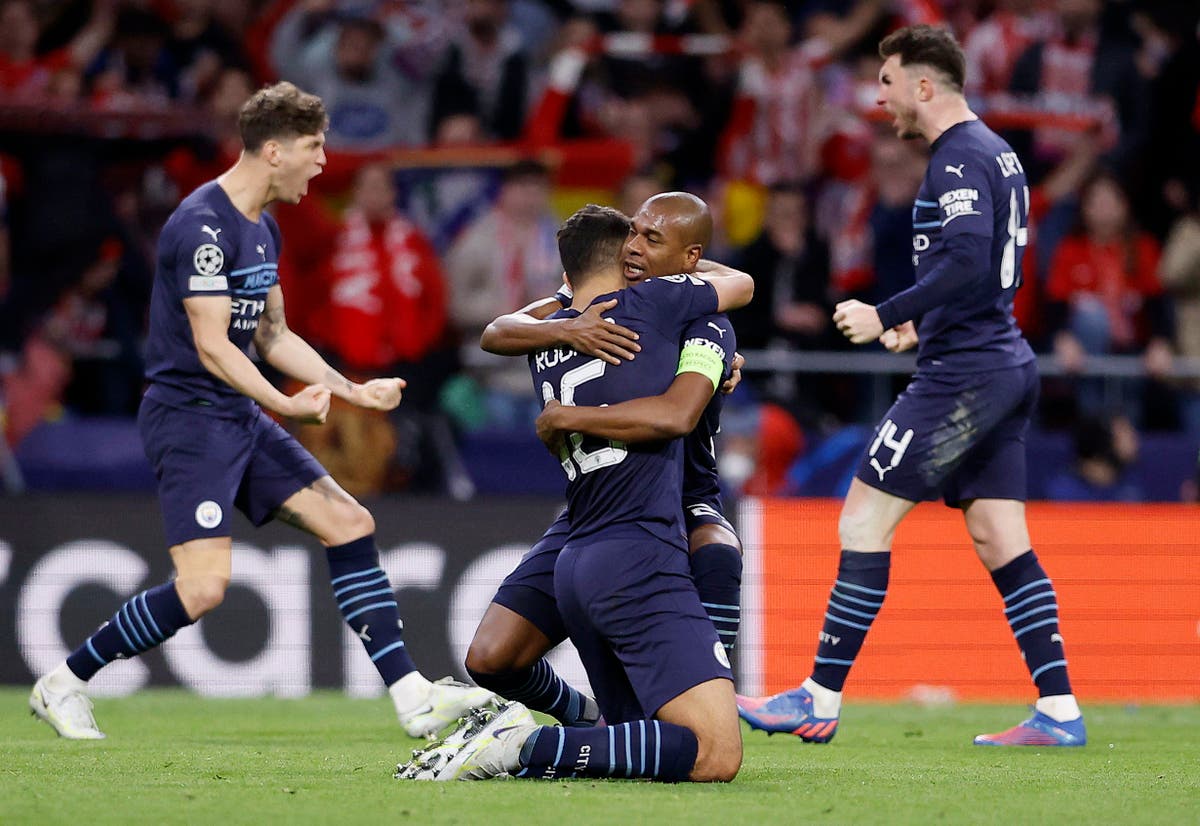 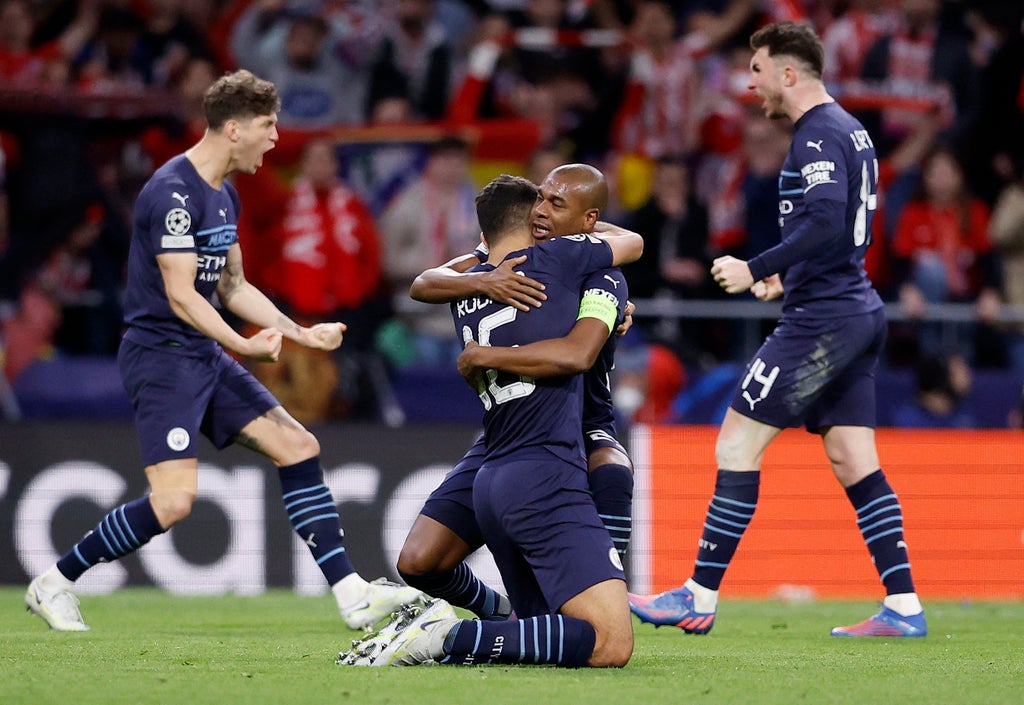 Pep Guardiola’s side arrived at the Wanda Metropolitano with a 1-0 lead from the first leg and it remained nervy throughout in Madrid as they struggled to kill off the tie.

Atletico kept it tight for the first half and then increasingly put the pressure on after the break, with Antoine Griezmann, Matheus Cunha and Angel Correa all going close.

But the home side could not find the goal they needed to level things up on aggregate and were a man down for stoppage-time after Felipe was shown a second yellow card. There were 12 minutes of stoppage time played as Atletico looked for a fight at every opportunity in an ugly conclusion.

City booked their place in the last-four where they will face Real Madrid, keeping their hopes of a first Champions League title alive.

Atletico pressed higher up the pitch from the start than they did a week ago at the Etihad, though it was more of the same in terms of rough treatment. Phil Foden seemed to be the target in Madrid and he had to be bandaged up early on, as Felipe clattered him in the air and cut the back of the City man’s head.

Felipe somehow avoided a yellow card on that occasion but it soon came, as he went in late from behind on Kevin De Bruyne. That didn’t deter the defender though – he came close on a couple of occasions to giving the referee a big decision to make.

With 30 minutes played, City nearly took the lead on the night. Foden played the ball to Ilkay Gundogan, who struck the post with a low shot. His header from the rebound was blocked, before De Bruyne threw himself at the ball in a chaotic passage of play. Atletico cleared the danger.

With 125 minutes of the tie played, Atletico had their first shot. Geoffrey Kondogbia’s shot from distance was deflected and comfortably saved by Ederson. Joao Felix was bright and the home side were certainly braver, though it didn’t result in a clear-cut chance in the opening half.

Atletico enjoyed their best spell of the tie after the break. Felix headed a difficult chance over the bar, before he set the ball back to Antoine Griezmann and the Frenchman sent a half volley just wide of the far post.

Rodrigo De Paul was introduced with 20 minutes remaining as part of a triple change and very nearly had a pivotal impact within seconds. Marcos Llorente cut the ball back to him, and he couldn’t trouble Ederson with the whipped effort.

Luis Suarez got his chance off the bench late on, as Atletico increasingly piled the pressure on in search of a goal that would have sent the tie to extra-time.

A sensational block from John Stones kept the home side at bay, just as Matheus Cunha unleashed a powerful strike from close-range and thought he had levelled things up on aggregate. Yannick Carrasco’s cut-back then very nearly found Luis Suarez in the box.

Phil Foden was caught by Felipe and went down as the clocked ticked into stoppage time, with Stefan Savic then trying to drag the City man to his feet. That started a melee involving both benches in ugly scenes and resulted in Atletico being reduced to ten men. Felipe saw a second yellow for the challenge, while Savic was booked for his involvement.

Nathan Ake, Foden, Riyad Mahrez and Joao Cancelo were all booked in a manic final few minutes as things boiled over.

Diego Simeone charged onto the pitch and unleashed an outburst at Savic, earning a yellow card in the process, in a bizarre ending, before Ederson made a stunning save to deny Angel Correa in the 12th-minute of additional time with the final kick. Savic and Jack Grealish were involved in a confrontation in the tunnel post-match as the home side’s frustrations continued.

City will soon be returning to Madrid, though it will be the Bernabeu rather than the Wanda Metropolitano next up.