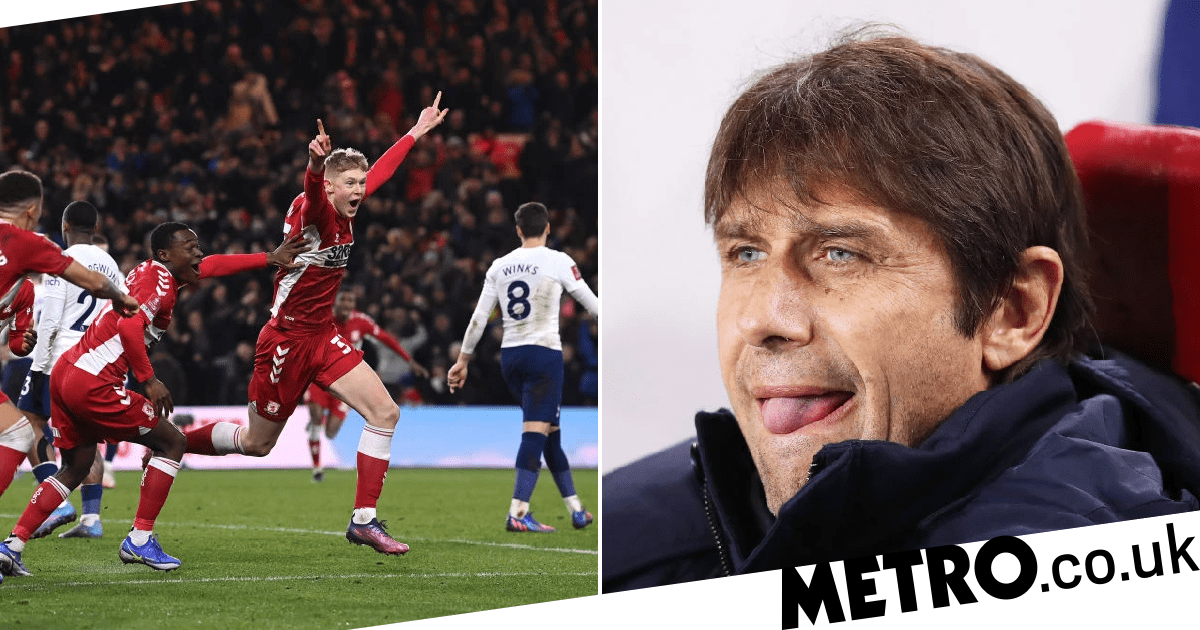 Antonio Conte has criticised Tottenham’s performance after they were dumped out of the FA Cup by Middlesbrough on Tuesday night and suggested he was too kind about their previous performance against Leeds United.

The Italian coach named an unchanged XI from the team that won 4-0 at Elland Road last time out in the Premier League but they looked lethargic and short on ideas against the Championship outfit, who knocked out Manchester United in the last round.

Both sides had chances with Son Heung-min especially wasteful but in the latter stages of the match – particularly extra-time – it was the hosts who looked more likely to score and eventually got their winner through 19-year-old forward Josh Coburn.

For the 14th season in a row, Tottenham will end the campaign without a trophy and while Conte was far from happy with the performance from his players, he still feels his side are a work in progress.

‘For sure the result is not good and we have to be frustrated. It was a pity because in these types of game you have to start and kill your opponent,’ he said after the 1-0 defeat.

‘If you give them hope, they will take confidence and improve during the game. Then anything can happen.

‘First of all, it is important to say that Middlesbrough played a good game, deserves respect and congratulate them for the win.

‘We have to reflect on our performance and on the game we played. These type of games, in these trophies away from home, you have to try to kill the game quickly.

‘Your opponent has to understand that the night will be difficult, instead we can do much better and in the end Middlesbrough deserved to go to the next round.

‘This is part of our process. I repeat, we have to try to avoid the up and down up and down and there is only one way to improve the situation is to work and learn about the defeat. We have to go ahead and we will try to do our best this season.

‘We have to give our best for the rest of the season, then we will see what is our position and the evaluation of our season. It is early to say something about this.’

Conte had questioned his future after Spurs lost to Burnley last week, later claiming it was a ‘strategy’ to get more out of his players, and now he says his more upbeat comments after the win over Leeds may have hampered his side’s performance.

‘My old coaches in Italy, they taught me that the coach sometimes has to use the carrot, sometimes they have to use the stick. I have to use the right way. After Burnley with a stick and then we won. After Leeds with the carrot we lost! The coach has to be clear in his instruction. I know there is a lot of space for improvement.’


MORE : ‘Shut up and get on with it!’ – Tottenham boss Antonio Conte is making an ’embarrassment’ of himself, says Craig Burley