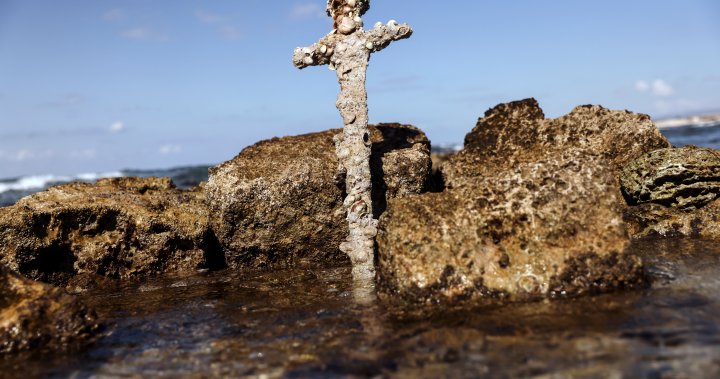 A sword believed to have belonged to a Crusader who sailed to the Holy Land almost a millennium ago has been recovered from the Mediterranean seabed thanks to an eagle-eyed amateur diver, the Israel Antiquities Authority (IAA) said.

Though encrusted with marine organisms, the metre-long blade, hilt and handle were distinctive enough to notice after undercurrents apparently shifted sands that had concealed it.

The location, a natural cove near the port city of Haifa, suggested it had served as a shelter for seafarers, said Koby Sharvit, director of the authority’s marine archaeology unit.

“These conditions have attracted merchant ships down the ages, leaving behind rich archaeological finds,” he said.

The sword, believed to be about 900 years old, will be put on display after it has been cleaned and restored.

The blade was discovered by scuba diver Shlomi Katzin on the seabed along the Carmel coast, said the IAA.

Read more:
Woman finds 4-carat diamond in U.S. state park — and she gets to keep it

After seeing stone and metal anchors, Katzin looked closer and saw the sword. He turned the ancient weapon over to the IAA and was awarded a certificate of good citizenship, reports the Times of Israel.

“The sword, which has been preserved in perfect condition, is a beautiful and rare find and evidently belonged to a Crusader knight,” said Nir Distelfeld, inspector for the IAA’s Robbery Prevention Unit.

“It was found encrusted with marine organisms but is apparently made of iron. It is exciting to encounter such a personal object, taking you 900 years back in time to a different era, with knights, armour and swords.”

The specific area where the sword was found is already familiar to the IAA; previous finds at the site suggest that it was used as a natural anchorage nearly 4,000 years ago, during the Late Bronze Age.