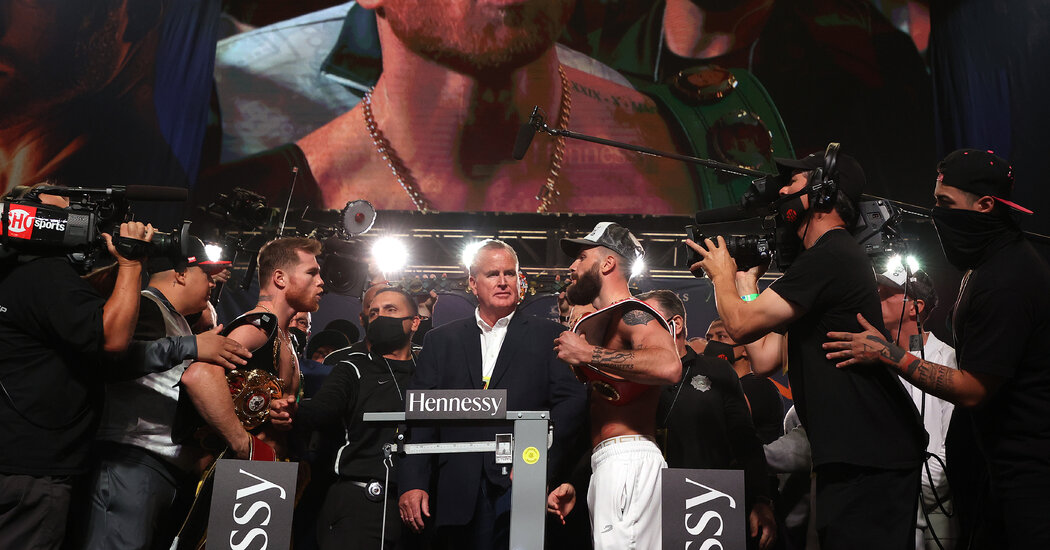 The retail price to watch on TV or stream it legally online? $79.99.

It’s steep, but standard in an era of high-definition TV and reliable online streams. The price of the card being sold by Showtime also helps fund the fighters’ payouts — a reported $50 million total for the main event alone.

The fighters will not divide that money evenly, of course. Álvarez, who is known as Canelo, is guaranteed a reported $40 million, and the payday is a nod to his status as one of the top draws in boxing. His most recent bout, a knockout win over Billy Joe Saunders, attracted more than 73,000 spectators to AT&T Stadium. The money also acknowledges Álvarez’s status as the sport’s top pound-for-pound fighter, unless Plant upsets him on Saturday night.

Here are some other key subplots:

Álvarez, who is Mexico’s highest-profile active boxing star, would have preferred to fight Plant on Sept. 18, which would have lined up near Mexican Independence Day and made the title bout part of a broader celebration. His record features five Independence weekend title fights, and six more on Cinco de Mayo weekend.

By midsummer, a deal for a September bout was nearly finalized — and then it fell apart.

Álvarez and Plant agreed to terms by August, for a fight scheduled for November 6. The new contract satisfied both fighters, but the new date would place it in direct competition with U.F.C. 268 for sports fans’ attention and pay-per-view dollars.

Caleb Plant is forthright about his tough upbringing. He, his sister and his father, Richie, lived in a mobile home in tiny Ashland City, Tenn. Plant has told reporters that the trailer grew frigid every winter and unbearably hot every summer, but also says the experience has made him nearly bulletproof as a boxer.

“You can’t break a poor boy’s chin,” Plant has said repeatedly in the run-up to his bout against Álvarez.

For his part, Álvarez is familiar with Plant’s mantra, and, in an October interview, dismissed it with a smirk and a wave of his hand.

“He talks about where he’s from and what he’s been through so people feel sorry for him,” said Álvarez, who grew up in Guadalajara, Mexico. “But we all come from the same side. I was poor, too, but I don’t talk about it so people will feel sorry for me.”

Who gets the winner?

An upset win by Caleb Plant might actually simplify things for Showtime, the pay-per-view platform airing the fight card. Plant might lack Álvarez’s star power and built-in audience, but he is signed to Premier Boxing Champions, a managerial outfit that partners with Fox and Showtime on boxing programming. A Plant win guarantees that the next super-middleweight title bout will land on a P.B.C.-partnered platform.

But if Álvarez, a promotional and broadcast free agent, wins on Saturday, Showtime will have to compete with other platforms for his next fight. This fight landed on Showtime because P.B.C. had Plant, and Plant owned the International Boxing Federation title, which Álvarez wanted. If Álvarez wins, Showtime will have to attempt to lure him back.

“That’s understandable, given that he wants the biggest, legacy defining fights available at this point in his career,” said Stephen Espinoza, president of Showtime Sports. “We’re optimistic that we’ll be able to continue the relationship. We look forward to doing a successful event, and continuing to work with both Canelo and Plant in the future.”

Álvarez ’s two bouts with Gennadiy Golovkin reportedly generated a combined 2.4 million pay-per-view buys, impressive numbers which help explain his appeal to boxing broadcasters. From December 2018 until this past May, Álvarez fought exclusively on the streaming service DAZN, first under a contract with Golden Boy, his former promoter, and then as a free agent in a series of one-offs.

DAZN officials had hoped to arrange a third Álvarez-Golovkin bout. Álvarez has said he is not interested. Showtime could entice Saturday’s winner with potential matchups against undefeated contender David Benavidez, or Jermall Charlo, a middleweight champion open to moving up a weight class.