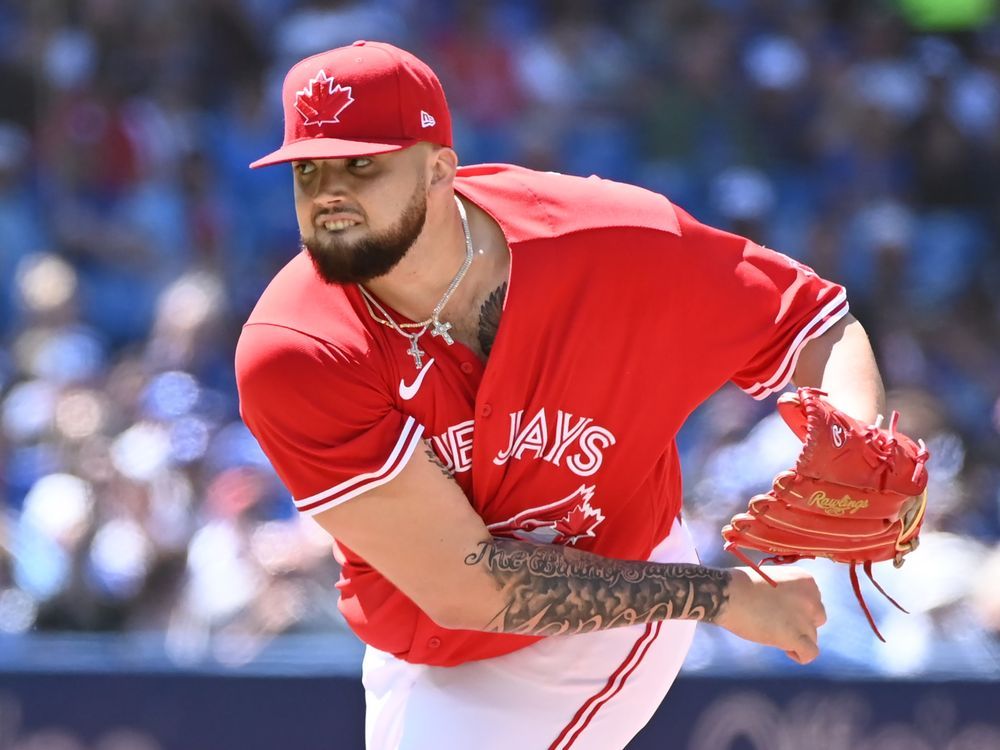 After closing the first half of the regular season at 44-37, the Toronto Blue Jays find themselves hovering near the playoff cutline as the second half of the campaign begins.

The New York Yankees look primed to run away with the American League East this year while division rivals Boston, Toronto and Tampa Bay own the AL wild-card spots entering Tuesday’s games.

An expanded playoff structure this year — a third wild-card team was added in both leagues — may help teams like the Blue Jays, who just missed out on the post-season last year at 91-71.

Here’s a report card look at Toronto’s first half of the 2022 season (all statistics entering play Tuesday):

Manoah has emerged as the staff ace thanks to a 9-3 record. The hulking right-hander is third in the AL with a 2.33 earned-run average, his 0.99 WHIP ranks fifth and he’s ninth in opponent batting average (.213).

Canadian closer Jordan Romano (2-2, 2.79) was a workhorse over the first couple months as the Blue Jays found themselves in tight games with remarkable frequency.

His ninth-inning performances are a big reason why the Blue Jays are 18-12 in one-run games. Romano, from Markham, Ont., has 17 saves this season, tied for second in the AL behind Cleveland’s Emmanuel Clase.

Among the main relievers, Adam Cimber and David Phelps have posted decent numbers while Trent Thornton has been mediocre. Trevor Richards and Julian Merryweather were having down years before going on the IL.

A healthy George Springer has helped stabilize Toronto’s outfield. The centre-fielder is posting solid offensive statistics and his defence has been strong too.

Teoscar Hernandez has rounded into form after an oblique injury and Lourdes Gurriel Jr., has also provided a steady presence. Raimel Tapia has been a competent option and backup outfielder Bradley Zimmer’s speed has made up for a weak bat.

There is plenty to like about Toronto’s infield situation.

Shortstop Bo Bichette and first baseman Vladimir Guerrero Jr., will likely be all-star game starters. Matt Chapman has been a rock at third base and Santiago Espinal has emerged as a quality everyday second baseman.

Cavan Biggio has swung a hot bat since his recall from Triple-A Buffalo in late May. He has been a valuable utilityman since he can play well defensively in multiple positions.

Alejandro Kirk is slashing .315/.405/.910 in a breakout season while forming a formidable 1-2 punch with Danny Jansen.

Since Jansen has been on the injured list twice this year, the Blue Jays have given top prospect Gabriel Moreno some big-league reps and he has flashed some of his impressive skillset.

General manager Ross Atkins has done well to shape a competitive roster with a bright future. The next few weeks will be a real test as he aims to make improvements by the Aug. 2 trade deadline.

Addressing the lack of depth on the mound is priority No. 1. Another left-handed bat would be a welcome addition too.

Toronto sits ninth in the 30-team MLB power rankings with its 44-37 record slightly better than the 2021 squad (43-38) at last year’s midway point. The Blue Jays currently have a 90.7-per-cent chance of making the playoffs, per FanGraphs projections.

Injuries to key players have not made things easy for Montoyo, who’s in his fourth season as skipper. He’ll be under pressure to get an expected contender back to the post-season.

This report by The Canadian Press was first published July 5, 2022.