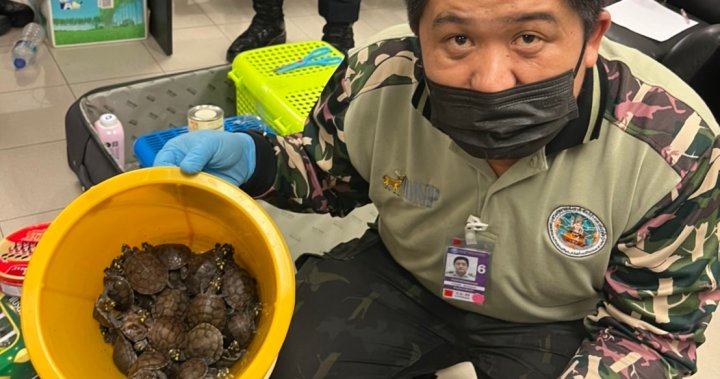 Two women were arrested in a Thai airport on Monday after authorities discovered at least 109 live animals packed into their luggage. The staggering list of wildlife included porcupines, armadillos, turtles, chameleons and snakes.

Security officers at Bangkok’s Suvarnabhumi Airport discovered the veritable zoo after inspecting the bags of two women who were trying to board a flight to India. A routine X-ray scan helped authorities identify a couple of suspicious items which prompted them to investigate further.

According to a statement from Thailand’s Department of National Park, Wildlife and Plant Conservation, “two white porcupines, two armadillos, 35 turtles, 50 chameleons and 20 snakes,” were found in the women’s luggage.

The pair were taken into custody and charged under Thailand’s Wildlife Preservation and Protection Act, The Animal Epidemic Act of 2015 and the Customs Act.

The Bangkok Post identified the women as Nithya Raja, 38, and Zakia Sulthana Ebrahim, 24, who were attempting to fly to Chennai airport in India.

According to TRAFFIC, a non-governmental organization that investigates wildlife and plant trafficking, the smuggling of wildlife is the fourth largest illegal trade in the world, behind weapons, drugs and human trafficking.

In March 2022, TRAFFIC released a report that found that 141 wildlife seizures have occurred in 18 Indian airports between 2011 and 2020.

Bunk beds in economy airlines? That dream may become a reality for jet-setters soon

“Over 70,000 wild animals including their body parts or derivatives, were found during the study period,” the report says. “Wildlife derivatives weighing over 4000 kg (approximately four-and-a-half tons) were also seized at airports in India.”

This only represents a fraction of the illegal wildlife trade, which TRAFFIC writes often “goes unchecked and unreported.”

The surviving animals recovered in this smuggling bust will be sent to wildlife rescue centres and breeding stations across Thailand, according to the Department of National Park, Wildlife and Plant Conservation.

It’s unclear if the women will face time in prison or have to pay any fines.